John Peel first came to prominence in the UK with his post-midnight Perfumed Garden show on pirate Radio London. John was part of Radio 1’s launch team in September 1967 and presented Top Gear on the second day of broadcasting at the fledging station. But what’s this? Before the Marine Offences Act came into force in August 1967 John had already made it back to the mainland in a BBC Home Service feature, Peel’s Progress.
Peel’s Progress was a short feature in the daily afternoon magazine programme Home this Afternoon. “Each week”, proclaimed the Radio Times, “John Peel talks about people and places he has come across as he walks from Land’s End to John O’Groats.” In actuality this isn't the John Peel. John had left Californian radio station KMEN in February 1967 and had joined Radio London by March. Chances are it was Tory MP William John Peel or, as Robin Carmody suggests, a former BBC scriptwriter of the same name. If you have any further information please let me know.
During John’s career he was increasingly used to introduce or narrate programmes with themes far removed from his usual musical tastes. He’s an example from 1968 which is, however, music-related, The Voice of Pop, looking at pop lyrics and censorship. Here’s how the Radio Times reported on the programme that was first broadcast on Saturday 19 September 1968. Note the appearance in the programme of Elektra Records boss Clive Selwood, who would go on to run Dandelion Records with John, and in the discussion afterwards, Gillian Reynolds then radio critic at The Guardian now of The Daily Telegraph. 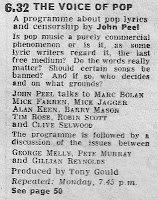 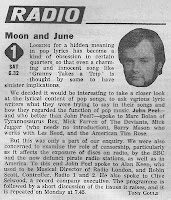 In 1988 John provided the opening and closing announcements to a Radio 1 four-part series in which listeners talked “openly about romance, sex and love” in What’s Love Got to Do with It? John’s voice presumably offering reassuring, trusting bookends to the mix of frank vox pops. Here’s part of the second programme called Is That All There Is? Broadcast on 19 September 1988. Warning: this  programme includes material of a sexual nature.
By the mid-90s John was presenting and narrating an increasing number of TV programmes. One such was the Channel 4 series Classic Trucks. Here’s an edition from that series about Britain’s post-war buses, Ticket to Ride. One can only assume that John found the early footage of buses in Ipswich of interest as it was just 16 miles down the road from Peel Acres. This programme was first broadcast on 24 January 1995. The recording is of the repeat on 30 April 1996.
And finally, in this random selection, everytime Radio 1 commissioned a new jingle package they recorded a DJ ident for John even though he rarely used them; on the occasions I heard his daily late-night show I can’t ever remember him playing it. So it fell to other DJs to play John’s jingle. Here from 30 March 1978, in a tantalisingly short clip, is Paul Gambaccini sitting for an absent Mr Peel.

Read more on the John Peel wiki site.
Posted by Andy Walmsley at 02:00

I'm pretty certain that the John Peel mentioned on the Home Service programme was not the same John Peel who was to join Radio 1 three months later. Quite apart from the fact that it's inconceivable that he'd have wanted to do such a thing at the time, or indeed that the Home Service would have employed an offshore DJ, there were other John Peels, it having been a fairly common name with its historic resonances. There was, I think, a BBC scriptwriter in the 1950s & 60s with that name (vague memories of old Radio Times there); there was definitely a Tory MP with the name. I think you should state here that this was most likely to have been a namesake.

David Jensen sat in for Peel in 1977, and as you say (and link to) Gambo in 1978 - the latter also did the show in the first week of September, meaning that we'll sadly never know what Peel would have said had he been broadcasting the day Jim Callaghan announced there would be no general election at that time. They were clearly struggling to find anyone remotely similar within the station, so used the more musically aware and credible of their mainstream presenters - in the '80s, they often used people not normally on the station, like Mark Ellen or Muriel Gray.

Robin - thanks for the info about the other John Peels. I must admit I did find it odd and posed this question in an earlier draft of this post, but then edited out! I'll edit the above post.

The mysterious John Peel on Peel's Progress was in fact John Hugh Brignal Peel (1913-1983) according to the Genome website. There is a small article on him on the Wikipedia page of John Hugh Brignal Peel, who was a British journalist, author and poet, writing, as J. H. B. Peel. His father was comedian Gillie Porter (1887-1975; real name: Hugh William Peel). The source of the Genome link is here: http://genome.ch.bbc.co.uk/6677f71ead2d4a76aabe77bbb606ff54