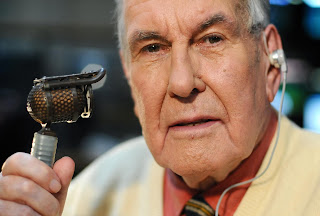 The BBC has announced that Tim Gudgin who reads the football results each week on BBC1’s Final Score is to ‘retire’  on 19 November. Tim has been reading the results since 1995 when it was part of Grandstand. He was associated with that programme since the mid-60s, reading the racing and rugby results back in the days when the hand-written captions used to fly across the screen. 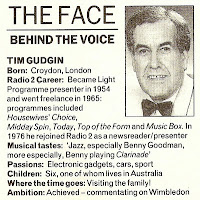 Here’s Tim reading the results and talking to presenter Steve Ryder on Grandstand’s 40th anniversary programme on 10 October 1998.
Tim also features in this BBC2 short film called 4:45 broadcast as part of the 10x10 series on 11 June 2000.

But Tim’s main day job for about 40 years was as a presenter, announcer and newsreader on BBC radio.  He long held ambitions to be on the radio but a careers master maintained that “to be a broadcaster, you require a first-class degree.” Tim was educated at Hardy’s School, Dorchester, Bishop Wordsworth’s, Salisbury and Whitgift School in Croydon.

Tim got his break in broadcasting after he was called up for National Service. Posted to Hohne in Germany he successfully auditioned along with 200 other hopefuls for the job of announcer with the British Forces Network. At the BFN he was trained by Robin Boyle – with whom he would later work with at the BBC - and became involved with the Drama Club, alongside another future BBC man, Don Moss. Working for the BFN in Hamburg and later Trieste Tim presented programmes such as Morning Story and Early Bird.

Returning to civvy street Tim joined the BBC in 1952, first on the European Service and then on both the Light Programme and Home Service and subsequently Radio 2.  He hosted a wide variety of programmes such as Music Box, Top of the Form, Midday Spin, Housewives' Choice, Round the Bend, Saturday Night at the Light, News Time, Swingalong, Out and About, Treble Chance, Melody Hour, Radio 2 Top Tunes, The Late Show and You and the Night and the Music.

Here's a short audio montage of Tim on the Light Programme, Network 3, Radio 4 and Radio 2.

On television he was also chairman of the Square Deal Surf Forum advertisement, the proceeds of which bought him his first brand-new house. Blue Peter viewers may also remember him as the voice of the Bleep and Booster stories.

Tim – enjoy your well-earned retirement.
Posted by Andy Walmsley at 16:51

I had the pleasure of working alongside TG for a good few years at R2. An absolutely charming gentleman, with a wonderful line in scorn for Management nonsense. I remember one occasion when they sent him a long memo about things he was not to do during You & The Night & The Music. So he audibly lit up one of his fine cigars, put on a little light jazz piano in the background and read out the memo on-air, with a few choice comments along the way!

Tim Gudgin has reading The Classified Football Results on BBC-1 Grandstand Final Score since 1995 when he took over from Leonard Martin until he retired in 2011.

John Langham who used to read The Horse Racing & Rugby Results on Sports News Desk at Lime Grove Studios in London and in The Mid Sixties when Tim read The Results for the last 46 years.

Tim Gudgin is The Famous Voice of The Classified Football Results for The BBC-tv Sport Grandstand Final Score.