On the Light - Part 7 "From a factory somewhere in Britain" 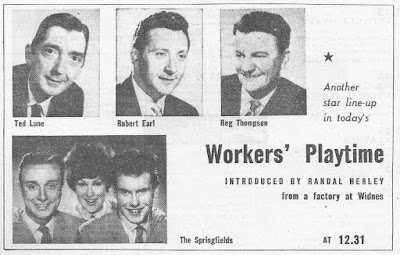 As part of the BBC's effort to support and entertain those on the Home Front it devised a number of series that would visit the factories and workplaces throughout Britain. These were Factory Canteen, Works Wonders and, the best-known and longest-running of them all, Workers' Playtime. The latter ran on the BBC Light Programme until 1964 and is remembered in this the seventh of nine posts celebrating the launch of the Light seventy years ago this week.

First off the blocks was the professional entertainment for factory workers that was taken care of by members of ENSA in Break for Music. It first aired on 1 January 1940 and started a regular weekly run on the Home and Forces Programme from July 1940 (1) until November 1945.

This was followed by the short-lived Factory Canteen starting on the Home Service on 3 August 1940, but not becoming a regular programme (on both the Home and Forces Programme) until the following May. (2)

Factory Canteen relied on the worker's themselves to provide the entertainment as did the much longer-running Works Wonders that was broadcast on the BBC's Home Service between October 1940 and August 1949.

Meanwhile professional entertainment for the factory workers was taken care of by members of ENSA in Break for Music that first aired on 1 January 1940 and then started a regular weekly run on the Home and Forces Programme from July 1940 (2) until November 1945.

Workers' Playtime was produced by the variety department of the BBC under the stewardship of John Watt but the programme had the "blessing" of Ernest Bevin's Ministry of Labour. In the 1942 BBC Year Book he described what happened on each show:

Every Saturday morning, a small band of engineers and artists, some of them world-famous stars, go by bus to a factory or to some big munition-works buried in the heart of the country. There the studio is set up in the factory canteen, a temporary small wooden stage erected at the end of the room, the microphone slung from the roof, and the entertainment given to as many workers as can be packed into the available space. Of course in these big factories all the people cannot get into the canteen at one time, and accordingly the broadcast is relayed throughout the whole of the works so that everyone can hear it. Workers in their homes, too. can hear it and know what is being done to entertain the members of their families who are working so steadfastly for the national effort.


Like the other series in this post Workers' Playtime had a try-out (in January 1941) before running weekly from May 1941 and then thrice-weekly from October that year. During its wartime run the exact location was kept secret (no doubt for fear of providing information to the enemy), hence the announcement that the programme was coming from "a factory somewhere in Britain". Post-war we at least got the general area; "from a canteen in Coventry" or "from a jam factory in Bristol".

Not all editions came from industrial settings: apparently to celebrate the gathering of record crops in 1942 an edition was broadcast from a harvest field among the Herefordshire hills "when farm-workers, sitting on the grass at sunset, heard famous music-hall artists on a rustic stage decked with hops and corn." (3) 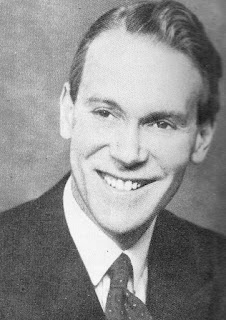 From the start involved in the Workers' Playtime unit were producer and presenter Bill Gates (pictured above) and pianists George Myddleton and Bruce Merryl. Bill remained with the show until the end of its run some twenty three years later. Other regular hosts included Philip Robinson, actors Philip Garston-Jones and Randal Herley and staff announcer Roger Moffat. Regular musical support was provided by pianist James Moody and the Harry Hayward Trio.

The show featured hundreds of comedians, singers and musicians who were prepared to trek across the country for the half-hour performance but (at least from my quick perusal of the BBC Genome website) the cast invariably seemed to include comic Cardew Robinson, impressionist Peter Goodwright, singer Sheila Buxton and a star turn from Ken Dodd. The format was pretty much the same: opening musical act, comedian, singer and finally the star comic.

With such a high turnover of shows Workers' Playtime provided budding comics and singers with radio exposure. One such was Roy Hudd who got his radio break in 1960, thanks to the intervention of Ken Dodd. Doddy had mentioned to one of the show's producer's James Casey, head of Variety for the BBC in Manchester, that he'd seen an up and coming young comic in a show at Babbacombe.  Based on that recommendation Casey booked Hudd for Workers' Playtime which came from the Ferodo Brake Lining company in Chester-Le-Street and featured top-billing for Jimmy Clitheroe. (4)

Roy Hudd recalled that first appearance in his autobiography:

I had no idea where Chester-Le-Street was, so I travelled there the night before the broadcast and stayed in a B&B. This cost me all the cash I had and the next morning I had to walk a long way to the factory in the rain. My precious stage suit was creased but dry, as were my precious bad parts. When I arrived among the Fereodo brake linings, soaked to the skin, I was greeted by Jimmy Casey who explained that everyone in the show stayed in Manchester and was transported to the venue on the morning of the gig.: the BBC paid for the hotel and the transportation. Thankfully he did spring me the cost of the B&B or I'd never have got back home.

That Workers' Playtime was the first of many I did for Jimmy Casey. I was first spot comic with everyone from Albert Modley (who didn't use a script, just a page from an exercise book with six large lettered words on - the cues for his gags), Ken Platt, Cardew Robinosn, Mrs Shufflewick and yet another hero - Ted Ray. (5)

James Casey himself remembered his time producing the show when he spoke to the Radio Times in 1982: "Each factory was an event to the workers in a way it could never be today- now that they can go home to a vast choice of televised entertainment. Those workers were incredibly enthusiastic, and there was such camaraderie that it was too easy for comics to get laughs by slipping in jokes about the factory, perhaps mentioning the foreman by name. We had to try to stop them, because there were thousands of listeners out there who might be wondering who 'Charlie' was." (6) 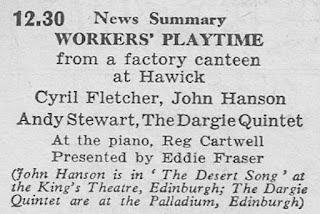 Workers' Playtime had started as a Home Service show and remained as such until the Autumn of 1957 when from 1 October it switched to the Light Programme. (7) It trundled on until the final edition aired on 6 October 1964 "from a corrugated case manufacturer's at Hatfield, Herts", still with Bill Gates presenting and featuring Anne Shelton Cyril Fletcher, Val Doonican and The Ramblers.
But it wasn't exactly the end. The following week it was back re-badged as Variety on Tour with Bill Gates & co. not just visiting factories but also "Service Establishments and hospitals". You'd have been hard pressed to spot the difference as the first show came from the North - a factory in Hebden Bridge - with a bill that featured Ken Dodd, was presented by Roger Moffat and produced by James Casey.

Variety on Tour lasted just six months and came off-air in April 1965. But in a nod to its Workers' Playtime heritage top-of-the-bill were Elsie and Doris Waters. As Gert and Daisy they'd often appeared on the show and were the main guests on the one-hour fifth birthday show (along with their brother Jack Warner) and the twenty-first birthday show in 1962.

This recording of Workers' Playtime comes from a week-long revival on Radio 2 in October 1982 - to coincide with the BBC's 60th anniversary. The Monday to Thursday shows were once again produced in Manchester by James Casey, this time with Peter Wheeler as compère. The stars included Ken Dodd (again!), Harry Worth, Roy Castle and Les Dawson with good old Harry Hayward and his Trio providing the musical accompaniment. But this is the Friday edition from  "a record factory in Hayes" (EMI, of course) with Arthur English, Colin Crompton, Sweet Substitute and the Max Harris Trio. The master of ceremonies is Ray Moore doing sterling work by observing the two rules to get the audience on your side: knock the surroundings and drop in the name of the foreman.   This edition aired on 8 October 1982.

1  - The first edition of the series on 22 July 1940 went under the title Between Shifts and included an introductory announcement by Ernest Bevin. The programme reverted to Break for Music from 29 July 1940.
2 - The final edition of Factory Canteen aired on 23 October 1941
3 - As quoted in the BBC Year Book 1943 p. 32
4 - Broadcast on 17 November 1960 and also featuring Jill Day and Frank Cook. Needless to say the actual factory name wasn't mentioned on air or in the Radio Times billing.
5 - Quoted from A Fart in a Colander by Roy Hudd (Michael O'Mara Books 2010)
6 - Quoted in Playtime again by Kenneth Robinson in the edition dated 2 October 1982
7 - And in the event was cut down from two editions a week to just one a week for the rest of its run.
Posted by Andy Walmsley at 13:30