One the early successes on the BBC Light Programme, launched 70 years ago this week, was the travelling quiz show Have a Go!

The programme's popularity (1) was wholly due to the rapport that presenter Wilfred Pickles had with contestants young and old as he inevitably asked "What was yer most embarrassin' moment, loov?" Over time the chat with members of the public took precedence over the quiz element, though they were always encouraged and cajoled to win the full prize pot of "Thirty-seven and six!".

Wilfred Pickles had been born in Halifax in 1904 and from an early age was fascinated by showbusiness and went on to join a local amateur dramatic society, the Halifax Thespians. On one occasion, by which time his family had moved over the Pennines to Southport, Wilfred went across to visit them and ran into theatrical producer Arthur Belt. Would Wilfred care to read-through a part in his production of The Jeffersons he enquired? The part was playing opposite the young actress Mabel Mysercough. Wilfred and Mabel would marry in 1930 and would later work together on Have a Go! "How much money on the table, Mabel?".

In 1931 Wilfred successfully auditioned as an actor for the BBC's Northern region service in Piccadilly Gardens, Manchester. He would appear on programmes such as Children's Hour, Songs That Father Sang, King Pins of Comedy and Billy Welcome. Controversially in 1941 he also joined the rota of Home Service newsreaders where his non-BBC accent shocked some listeners. At the end of the day's broadcasting he'd sign off with: "Goodnight everybody, and to all you Northerners wherever you are - good neet".

The idea to use Pickles on the wartime bulletins came not from within the BBC but from the Ministry of Information. They felt that the "southerner" was having too much say over the airwaves for the northern listeners' liking. More intriguingly they also cited security reasons as his accent "might not so easily be copied by the Germans." To accommodate this the BBC moved Wilfred down to London and Bruce Belfrage up to Manchester and almost doubled his salary from £480 to £800. Apparently after his first bulletin there was a short interlude and announcer Franklin Engelmann cued in the record On Ilkey Moor Baht'At. In the event the news-reading experiment failed not only because of the listener complaints but, by Wilfred's own admission, the news bulletins were written "by a southerner for a southerner to read, which could make a lot of difference in the actual choice or order of words". (2)

Have a Go! was the brainchild of Philip Robinson, a Programme Assistant based in Leeds, in response to a request from the North Regional Programme Director, John Salt, for ideas for a "quiz programme with audience participation". The titles of Quiz Bang (3) and then Have a Go, Joe were rejected in favour of Have a Go!, though the name "Joe" didn't disappear entirely. There was an opening and closing bit of community singing for the audience to heartily join in with: "That's the show, Joe, tha's been and 'ad a go; Now tha can tell thi friends as well, Tha's been on't Radio". As you can tell, to quote Russell Davies, the show was a "festival of ee bah gummery". (4)

The series was initially broadcast to listeners to the Northern Home Service. The first trial recording of Have a Go! was made in Bradford on 11 February 1946 and the first actual broadcast in nearby Bingley five days later.  According to Asa Briggs "the sense of popular participation was immediate and warm. Very quickly the original idea of a light-hearted quiz had been extended, for Pickles knew how to bring out the personality of each contestant and to reveal the human stories". (5) 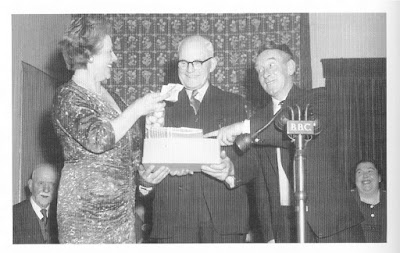 The programme was a hit and "have a go" and "ow do - ow are yer?" started to become as popular as the catchphrase-laden ITMA. Within six months Have a Go! was moved to a national slot on the Light Programme with the first show, on 16 September 1946, coming from Bridlington.

In the early editions the producer was Philip Robinson but by 1947 he was replaced by Barney Colehan (6) giving rise to another catchphrase: "Give 'im the money, Barney". Musical accompaniment was initially provided by Jack Jordan but the following year Violet Carson joined the programme. Violet, a fine soprano as well as a pianist, had previously worked with Wilfred on many editions of Children's Hour and would, of course, go on to play the hair-netted harridan Ena Sharples in Coronation Street.  By 1953 the programme was broadcast live rather than  pre-recorded and production moved to London under the guidance of Stephen Williams with Harry Hudson at the piano. This was also the year that Mrs Pickles was roped in as "Mabel at the Table".

And here is a recording of that first live edition as broadcast on the Light Programme on 17 November 1953 coming from the town of Ramsbottom:

Have a Go! trundled on around the country - apparently they never re-visited a location - until the final edition on 10 January 1967.  By now the quiz element had totally gone and Wilfred would ask Mabel to pass over some unspecified pot of money to the best anecdote from some (usually) elderly resident of the town.

On the radio at least, Wilfred Pickles' easy-going, man of the people style meant he seemed destined to travel the highways and byways meeting the folk of Britain in series such as Pleasant Journey (1950) , Can I Come In? (1952-3)  and Afternoon Out (1956-61).  On BBC TV there was Ask Pickles (1954-56) in which he asks "for the things you'd like to see on your television screen", it was a kind of Wilf'll Fix It.

Alongside all this the acting continued. His stage successes included The Gay Dog with Pickles as greyhound owner Jim Gay, a role he'd revisit on TV, radio and in the 1954 film version. There was also a long run at Blackpool in Hobson's Choice, again a play he'd star in on BBC TV and radio.  For the Home Service he appeared in Arnold Bennett's plays The Card and The Regent. Later there were roles in films such as Billy Liar and The Family Way and a starring role as ageing widower Walter Bingley with Irene Handel as Ada Cresswell in Thames TV's For the Love of Ada.

For many radio and TV appearances it's noticeable the number of times that both Wilfred and Mabel appear. This arose through very tragic circumstances with the death of their seven-year-old son David, after contracting infantile paralysis. Later they would ask the BBC  to let them broadcast programmes on Christmas Day from various Children's Hospitals. In addition, Wilfred insisted that he and Mabel, who'd also lost one child in pregnancy, to appear as often as possible together on air and on tour. Such was the level of their national popularity that in 1955 the BBC Light Programme accorded them a special programme to celebrate their silver wedding.