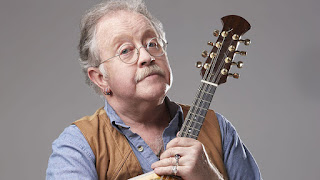 With Mike Harding leaving Radio 2’s folk show this month I’m posting this brief history of folk programming on the network. Admittedly Mike has not chosen to leave but with the changing of the guard after nearly 15 years I recall the names of Wally Whyton, Tony Capstick and Jim Lloyd. 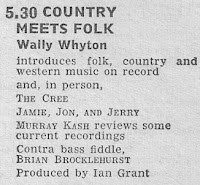 When Radio 2 started in September 1967 the folk show, broadcast on that opening Saturday, was billed as a Radio 1 production, but simulcast on Radio 2. In fact it was not purely folk, but an hour-long mix of country and folk under the title that made this abundantly clear: Country Meets Folk. Hosting proceedings was Wally Whyton. At the time Wally was already known as a skiffle player and folk singer and to a generation of children, myself included, as appearing with the puppets Olly Beak and Fred Barker on ITV’s The Five o’Clock Club.  He’d already broadcast on the Light Programme in Skiffle Club, Folk Room and It’s One o’Clock.


Country Meets Folk was an old Light Programme show, first aired in July 1967 in the dying days of the old network. It was a replacement for the half hour A Cellar Full of Folk, both programmes being produced by Ian Grant.  Alongside Wally was Jim Lloyd (more formally billed in the Light Programme shows as James Lloyd) who was tasked with presenting the folk and country news and then later also looking after the new record release reviews.


In the rather confusing way that programmes were scheduled back then by early 1969 Country Meets Folk had moved to an earlier slot on Saturday afternoon on Radio 1 only, but months later shifted across to become a Radio 2 show, this time simulcast on Radio 1. The other occasional hosts were Malcolm Price and Johnny Silvo.


Throughout most of 1968 and 1969 Wednesday evenings, again on Radio 1, was home to a series of specially recorded folk sessions called My Kind of Folk. Most of this series was produced by Frances Line – later to become Mrs Jim Lloyd and in the 1990s Controller of Radio 2.


Of course other shows featured folk music, especially with the rise of progressive folk at the end of the 60s. On Radio 1 John Peel, David Symonds and Night Ride all played folk sessions. 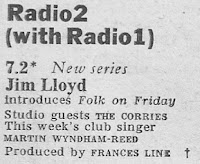 Whilst continuing to contribute to Country Meets Folk, Jim Lloyd was to get his first solo folk series, Folk on Friday, starting on Radio 2 on 10 April 1970. This was also produced by France Line. Jim had started as an actor in repertory before joining Tyne-Tees in 1959 as a continuity announcer, moving to ATV two years later. There was a spell introducing Midlands Today on BBC1 before contributing to radio shows such as Today, Roundabout and Woman’s Hour. A chance meeting in 1964 with The Spinners sparked his interest in folk music.


Folk on Friday ended in September 1971 when a schedule re-shuffle introduced the daily magazine show After Seven. Its replacement was Folk on 2, again with Jim at the helm and now going out late on a Sunday night. Meanwhile Country Meets Folk itself lasted another year, finally closing its doors in September 1972. Wally would return to Radio 2 the following year with Country Club – but that’s another story, and another blog post. 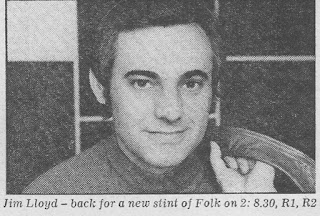 Folk on 2 continued as the sole folk show from October 1972 by which time it had shifted to a midweek position. But it was joined by an accompanying programme Folk 73 from 4 July 1973, the presenter this time being one Simon Bates.  Each week this show presented a different folk artist or group in a 30-minute session and so it fell to the continuity announcing staff, of which Simon was one, to do the honours. Folk 73 became, not unnaturally, Folk 74 with Len Jackson and then Jack McLaughlin. Folk 75 again had Jack as the announcer. For a few weeks on 1976 we also had Folk 76, this time with Michael Meech.

I am, however, leaping ahead with the timeline, as back on 8 July 1973 Folk on 2 was replaced by Folkweave, best known, of course, for being presented by Tony Capstick. Tony had been on the club circuit since the early 60s but got his break into broadcasting thanks to Radio Sheffield, where his popular, if quirky style ensured a 30 years career with the station. Regrettably ill health due to heavy drinking led to his dismissal in early 2003 and his death a few months later.


Folkweave was to be a Radio 2 fixture until 17 January 1980. The series was produced in Manchester by Peter Pilbeam. In fact show one in 1973 was presented by Harry Boardman and Harry along with Martin Winsor filled-in for Tony when he was unavailable. This is a clip of Tony in 1978. I can’t take credit for this recording which I’ve edited down from the show that I found on the web; at the time of writing the whole show, plus several others, are available to download.

Three years after Folkweave started there was another new show, Both Sides Now, again a fusion of country and folk, again presented by Wally Whyton with Jim Lloyd doing the news and reviews. Starting in early 1976 on a Thursday night it moved to a Saturday, after Sport on 2, from that October until the end of its run in December 1977.


1978 saw the revival of the session shows with Folk 78 from 3 January, this time with announcer and part-time folk singer Ruth Cubbin. Later that year Johnny Silvo took over, continuing with Folk 79. Folk 80, running from January to March, was introduced by Isla St Clair.


Folk on 2 with Jim Lloyd returned to the airwaves on 31 March 1980, and remained part of the schedules until 1997. Here’s Jim introducing that first show that would feature The McCalmans, Seamus Gavin, Cyril Tawney and folk news with Colin Irwin.


After 30 years of presenting folk music Jim Lloyd retired in 1997. His place in early 1998 was taken by Ralph McTell, who’d’ sat in for Jim the previous summer. This is part of Jim’s last show on 17 December 1997, with apologies for some of the reception interference part-way through.

And so we come to the present but departing incumbent, Mike Harding. Mike first show was broadcast on 22 April 1998 and would soon be billed as “the best in folk, roots and acoustic based music”.  During his tenure a new generation of folk performers have ensured yet another revival of folk music and from 2000 Radio 2 initiated the annual Folk Awards. In October it was announced that Mark Radcliffe would front the weekly folk show from next January. Mike’s last programme is on Boxing Day.
Posted by Andy Walmsley at 14:00

Great article that brings back the "good-old days" of Folk Music. We could listen to many of the progs mentioned via BFBS Cologne/Germany. And Wally was a constant guest from the very first show of "Hello Folk" on 7th October 1967. I had a nice talk with him before one of the CmF shows in the Playhouse Theatre in 1971.- I miss one name in listing (maybe he was only present on BFBS) and that is Murray Kash with "Folk Fare", on the air in 1966 and replaced by Wally's show.
Cheers from Germany
Bernhard

Hi Bernhard. I know that Murray Kash presented some shows on BFBS and I intend to write about him when I cover country music broadcasting. Thank you for the information about the BFBS folk shows.

Interesting page. When I lived in New Zealand my mother used to send me out cassettes of Folkweave. I still have them. Then a few years ago I had an email from someone who had found many of the master tapes in a skip behind the Beeb's Manchester studios. He rescued them all. Then he digitised them. But due to draconian copyright issues he claimed that he couldn't share them and faded from the scene. Therefore I must have a couple of year's of 'lost' recordings of Folkweave. I offered them to the Beeb who replied "Not interested." So they will get junked too. Shame.

One of the definitive and influential folk programmes was "London Folk Song Cellar." It was never aired in the UK, but was issued on transcription discs to stations overseas for home-sick Brit. ex-pats. Many of the shows were then home-taped. I capped quite a few in NZ. It seems that most of the discs were lost or destroyed - yet the LFSC was *the* spring board for so many folk singers and musicians including Martin Carthy, Sandy Denny, The Young Tradition, Shirley Collins, etc. The shows were recorded live in the basement of Cecil Sharp House (the HQ of the English Folk Dance and Song Society) in London. Since so few discs have survived (although I have just bought one at great expense) there are efforts to recreate the programmes from surviving clips mostly recorded onto now ancient reel-reel tapes. If anyone has any clips or tapes or discs of the LFSC please leave a message here. Thank you.

Thank you CJB for your comments. If you want to share any of those old Folkweave recordings please email me. Andy

BBC Treasure Hunt. There's a thread here. Seems like lost of folkies have tapes of Folk on 2, Folkweave etc.

Thanks for reminding me about that site Chris, that was indeed were I found some recordings whilst researching this post.

Readers are reminded that Mike Harding continues to broadcast a free weekly folk programme as a podcast on the web. Some have opined that it is better than when he was with the Beeb.

Spread the word and enjoy!!

My wife used to organise trips for our family to go to the recordings of Country meets folk at the BBC back in the late 60s early 70s. I would then record them from the radio.
Now I am transferring them from the tapes to mp3 on my computer.
Wonderful times and memories.

Dear 'Unknown' - please contact me about your audio files. Email: chrisjbradyATyahooDOTcom Chris B.