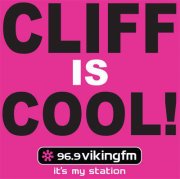 There’s a unwritten rule that all commercial radio breakfast shows must be (a) constantly plugged all day and (b) hosted by a couple of DJs, ideally one male, one female. Presumably the expected on-air chemistry will produce great results.


This time last year Viking FM Breakfast host Paul Foster had left the station in November and filling in at short notice was Drivetime DJ Ant Nichols alongside Rosie Madison. For December the station was running a ‘Cliff is Cool’ campaign. Probably started in response to the launch of Absolute 60s in November that had declared itself a Cliff-free zone, despite his musical contribution in that decade. For Viking though it was all in the name of the Cash4Kids charity.
Ant & Rosie_151211