The BBC World Service programme New Ideas was billed as the "radio shop window for British industry" with "news of the latest products of particular interest to the householder and small businessman". A kind of industry fair of the air.

Running weekly for nearly 40 years the ten-minute programme played an important role in promoting British business ideas abroad. By the mid-70s it was generating 12,000 enquiries a year to be dealt with by the small production team at Bush House that included an Export Liaison Officer. Those letters were then passed on to the companies who would often report back on an increase in orders. The BBC Handbooks highlight a number of successes from water purifiers, brain diagnosis X-ray scanners, maritime survival kits to asbestos cement cutters, solar energy devices and electronic door chimes.

Though New Ideas was heard on the English-speaking service of the BBC, other language services made their own versions with the Japanese one being particularly fruitful. By the early 1980s the External Services had over 100 programmes in 30 languages "geared to promoting exports or describing scientific, medical and technological advances". 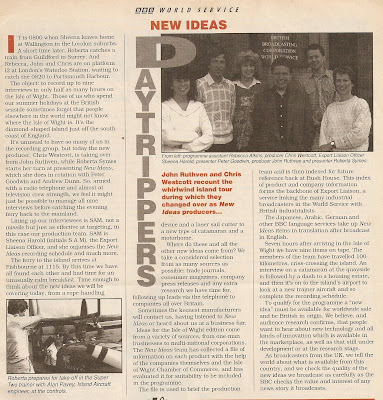 New Ideas had started in 1958 when London Calling called it "a series in which inventors, manufacturers, business man, doctors, surgeons, philosophers, technicians and scientists will talk of the latest inventions, discoveries and projects in their various fields". Over the years other programmes came along - Science in Action, Discovery, Health Matters and Global Concerns - that took over the reporting of some of these themes leaving New Ideas to concentrate on the marketplace. It was presented by a number of different broadcasters such as Chris Bickerton (in the example below), Casey Lord, Sarah Mills and in later years by Andrew Dunn, Peter Goodwin, Roberta Symes (daughter of one-time Tomorrow's World presenter Bob Symes) and Gareth Mitchell.

In October 1990 New Ideas was merged with the relative newcomer Tech Talk that had launched in 1987. Now with a doubled running-time of 20 minutes and keeping its New Ideas title but with the original element now forming a New Products part of the programme. Co-producer Chris Westcott explained that "we want to keep the new Ideas format of going out and about, talking to people in their workplace and seeing the things being made and used. That's where it ties in nicely with Tech Talk which has been an out-and-about engineering technology programme which hasn't concentrated necessarily on products." 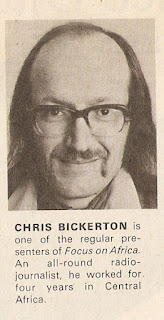 Here from 27 July 1974 is the earliest example of the programme I know of. It was included in a long sequence of World Service output sent to me some years ago by Richard Tucker, to whom I offer my thanks. At this stage it's just a straight read of product information with none of the reporting that Chris Westcott talks about. The presenter is Chris Bickerton, perhaps better known as one of the  of Focus on Africa team, something he presented for more than 30 years until his untimely death in 2002.

In this programme, edition number 833, the items are an acre-meter, an adjustable lawn rake, a portable charging generator and a plastic holder for use at conferences. At this time New Ideas had a theme, Quite Contrary, a 1966 KPM library music track by Syd Dale. In this recording the continuity announcer is Pamela Creighton.

The ideas, it seems, ran out in March 1997 when the programme was dropped. There are 27 editions from 1996 and 1997 on the BBC World Service website, though sadly not the final one.

If you have any World Services programmes of any genre and from any era please contact me.

Pamela Creighton! How I miss the World Service the way it once was before reduced budgets, cuts in service, rolling news, and overwhelming focus on the developing world at the expense of all else. Listened routinely to 5975khz each evening and also 9410khz as well as 11975 (???) and 17895 (???) Saturday and Sunday mornings into the early afternoons. What a marvelous blend it was of news, views, music, and entertainment. BBC Radio 4 online comes comes close, but it's not the same

Echoes and the 5975 transmitter closing down announcement taxe me straight back in time. You were allowed to see the workings back then. I wonder how many are still listening on short wave.

As a frequent web user, I gotta give you props for such captivating content. From language to style it's almost like we had the same vision. Change your life this year with our CELPIP FOR CANADIAN IMMIGRATION​ ​ 2022. We have been very careful to make sure our CELPIP CERTIFICATE​ ​ gives you the opportunities you have been looking for. I'll definitely bookmark this page to read this article moe times. Happy new year fellow readers.