It’s now no longer enough to just listen to the radio. Radio 1 encourages us to “Listen, Watch, Share” whilst the BBC’s Tim Davie talks about radio moving to a “screen world”.

But is the notion of a radio and screen-based hybrid a new idea? Seemingly not, as shown by the discussions about ‘radiovision’ back in the early 1980s and reported on by Elkan Allan in The Listener.

In 1981 a BBC working party under Monica Sims, then Controller at Radio 4, was considering a response to ITV’s plans for a breakfast time television service (eventually launched as TV-AM in February 1983). The working party verdict: televise the Today programme. 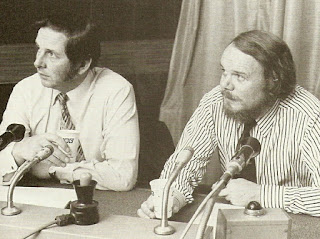 The idea was that Today would be supplemented with pictures and run from 6.30 am to 9 am weekdays and 7 am to 9.30 am on Saturdays, followed by an hour of radio chat along the lines of Start the Week. The argument was that the Corporation needed to do something to keep up with ITV and not be “pushed into second place by lack of resources”. But could the British public be coaxed into switching on the telly first thing in the morning before going off to work? Would the audience be grabbed by the sight of watching Brain Redhead, John Timpson and Libby Purves sitting around interviewing politicians and business leaders?

The televising of morning radio had been tried before in 1980 when Radio Scotland put cameras into the studio of Good Morning Scotland as part of the 50th anniversary celebrations of tv north of the border. The verdict was that it was “deadly”. Apparently “the sight of self-conscious newsreaders sitting at cramped desks detracted from comprehension instead of adding to it.”

The ‘radiovision’ idea was to broadcast from a tv studio rather than a radio one. This would “impose a visual discipline on the transmission and substantially alter the Today show”. It would start from the sound and add what pictures it could. Elkan Allan suggested that this would be at the expense of the present coverage which tended to “concentrate on political, international and economic reporting with frequent news and weather inserts plus sport and religion”.  A side-effect of this would be increased pressure to televise proceedings in Parliament as the use of stills during Yesterday in Parliament was seen as “death to television.”

At worst the BBC radiovision could, it was thought at the time, potentially “devalue” radio and provide television with pictures so “inadequate” as to drive viewers to the commercial opposition. At best it could “free us from the tyranny of the hypnotic box; help to make us more selective in what we lend our attention to”.

Of course, as we know, radiovision was dropped and by 1983 BBC television was ready to launch it’s own early morning programme Breakfast Time (clip below), beating  TV-AM on air by two weeks. Instead of sitting around a table discussing the day’s news, out came the comfy sofas. And by November 1989 cameras were in the House of Commons to show us what really went on in the chamber.

The concept of the merging of radio audio and radio vision was to resurface decades later once technology had caught up and the way that we consume news, information and music had radically changed.  Nowadays added pictures and a YouTube channel are seen as enhancing the radio experience, drawing in new listeners or just simply keeping existing ones. We even seem quite happy to watch a studio webcam were, it has to be honest, very little happens.

The growth in the “visualisation” of radio output was discussed last year by Roger Bolton on Radio 4’s Feedback talking to Radio 5 Live presenter Victoria Derbyshire and producer Louisa Compton.


The current developments to push out radio and radio-related content onto smartphones and tablets, essentially to make radio “multimedia”, are not just technology-driven but seen as necessary to grab the attention of those elusive younger listeners.  How different this all is from my own experience when I was a youngster of listening to a fading medium-wave programme under the bedclothes with my earpiece plugged in.

And to think that they used to say that radio has got the best pictures because it has no pictures.

Radiovision quotes from The Today show in sound-and pictures by Elkan Allan, The Listener, 14 May 1981
Read about the BBC’s development of RadioVIS
Posted by Andy Walmsley at 11:32

No, the 50th anniversary of the BBC!!