On Wednesday the BBC World Service has a special day of programming to celebrate 80 years of international broadcasting. In this post I turn back the clock 30 years to recall some of the English Service programmes from February 1982.
This is the summary of regular programmes from the February 1982 issue of London Calling. 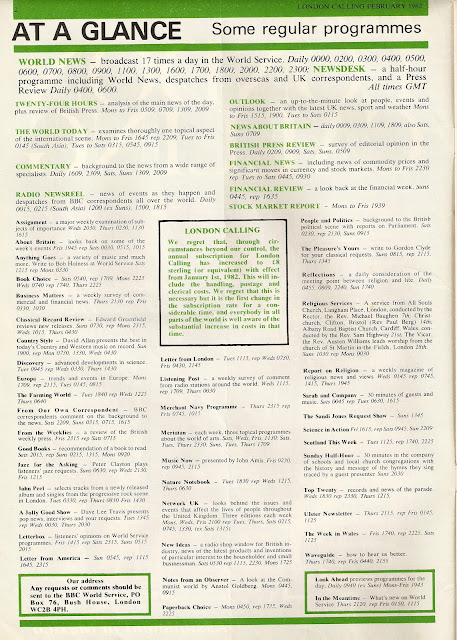 An old warhorse still on-air was Radio Newsreel, no doubt sounding much like it did some forty years previous. The regular news magazine was Outlook presented by either John Tidmarsh or Colin Hamilton, both of whom had been with the programme since 1966.
More news analysis was provided by Twenty-Four Hours. Back in 1982 the regular presenters were Alexander Macleod and David Lay; during the ‘70s John Tusa and Nigel Rees had worked on the programme.
A fairly recent addition to the schedules was Meridian, an arts programme that started in May 1981 replacing Theatre Call, Play Choice and Take One. Amongst the rota of presenters were Michael Billington, Alexander Walker, Jim Hiley, Gillian Reynolds, Sarah Dunant, Peter Clayton and Humphrey Carpenter.
Peter Clayton also hosted Jazz for the Asking. Other music shows that month included John Peel, A Jolly Good Show with DLT, Anything Goes with Bob Holness, classical requests with Gordon Clyde in The Pleasure’s Yours, Classical Record Review with Edward Greenfield, The Sandi Jones Request Show and Sarah and Company with Sarah Ward. You could also hear the latest chart sounds in Top Twenty, at the time the resident DJ was Paul Burnett.
On of the most popular shows was Letterbox, the World Service equivalent of Points of View. On air for about 20 years, I'm guessing, it was always (holidays apart) presented by Margaret Howard.
Another World Service regular was Casey Lord, he worked on both New Ideas, with Sarah Mills, and Business Matters along with Bob Finnigan.
Missing from the list, it got a seperate section in London Calling, is Saturday Special the sports coverage that ran from 15:00 to 18:00 presented by the great Paddy Feeny.

Last, and by no means least, I must mention The Merchant Navy Programme that went out three times a week. This programme about, erm, the Merchant Navy was presented for years by Malcolm Billings. I suspect that its brief was a little wider than that and included all things nautical but did you ever listen? If so, please let me know.
There’ll be more BBC World Service posts over the next few months.
Posted by Andy Walmsley at 09:34

Hard to work out which is more archaic for 1982: "music and news of the (hit) parade" or suggesting that Peel represented "the progressive rock scene" (arguably he did, in terms of which rock music was most progressive, but certainly not as that term had come to be used in practice ...)

Viking Radio had a menu trail in 1984 advertising their evening show, Fast Forward, referring to 'the latest on the rock and progressive music scene', although presenter Kerry Evans never used that term himself, as I remember.

Thank you so much! That did the trick, you saved me more endless hours of searching for a fix.

Colin Hamilton has been murdered in Mexico.
I have tried, with no success to reach someone who might care.
Perhaps you can help.
I have more details than most.
The papers in Puerto Vallarta don't like to print about expats being murdered.
Christine.

I NEVER missed an episode of the Merchant Navy programme! Surely I was not the only one?