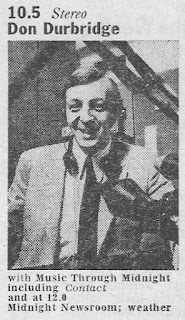 Former BFBS and BBC broadcaster Don Durbridge died last weekend. Don became a regular voice on Radio 2 during the late 70s/early 80s and lived and worked in Kent for many years.

Don was born in Glasgow in 1939 at a time when his father was in the Army (he died in a Japanese POW camp in 1945) but educated down in Clapham. His first job was with the Jack Hylton Entertainment Organisation but he also worked on various local newspapers in London before becoming a reporter on the Sunday Citizen.

His first broadcast was as a teenager in 1955 on the Light Programme show The Younger Generation (“young people discussing the current films, books, plays and tunes they like”), having answered an ad in the Radio Times. He made over 200 appearances before receiving his National Service call-up.

In 1962 Don married his first wife Yvonne, whom he'd know for eight years.  Four years later he started to broadcast for the British Forces Broadcasting Service (BFBS) in Aden, Cologne and finally Gibraltar. In Germany he worked on the Six-Thirty and Time Out shows and in 1969/1970 co-presented Family Favourites with Michael Aspel, first from Cologne and then Gibraltar.

In 1972 Don was one of the BFBS team assigned to cover the Munich Olympics and he achieved something of a worldwide scoop in gaining, with some subterfuge, an exclusive interview with multi-gold winning swimmer Mark Spitz.

Don joined the Radio 2 Presentation Team in 1974 as announcer and newsreader as well as presenting a whole host of shows such as Night Ride, Music through Midnight, Music to Midnight, The Late Show, The Early Show and Saturday Night with the BBC Radio Orchestra. He also deputised for Terry Wogan, John Dunn, Ed Stewart, David Hamilton and Joe Henderson.

As well as his national work Don was also presenting on BBC Radio Medway and still providing boxing and football commentaries for the BFBS. Such was his love of sport he was the matchday announcer at Gillingham FC for many years.


It was whilst working at BBC Radio Kent that Don met Ian McGregor. Ian takes up the story:

It was 10:28 on a Saturday morning in 1988.  I was the 'phone flicker at BBC Radio Kent's Sun Pier studio back then, and the new boy at the time. But the next programme was due to start in two minutes and there was no sign of the presenter.  I'd already slipped into the studio and lined up his name check jingle and first record (yes, record!), but, as the clock ticked seemingly more furiously towards the bottom of the hour, a feeling of mild panic was coming over me.....

And then Don appeared, 'Durbers' as I was soon to know him.  If truth be told, he looked like he'd just got out of bed - and that wasn't so far from the truth.  He'd already completed a gruelling newsreading night shift at the forces radio station BFBS, driven home for a couple of hours 'kip' and, after a cruelly short period of shut eye, raced to the BBC's Chatham studio to present his popular Saturday morning show Remember When.  I asked Don if there was anything I needed to arrange, and he calmly replied "let's just busk it mate".

And busk it is what Don did, brilliantly well.  A few records, seemingly endless reminiscences about the artists performing them, a massive pile of postcards from his adoring fans (his pigeon hole was always the fullest) and a continuous stream of anecdotes from callers was all he needed to make an entertaining radio programme; and the phone lines didn't stop flashing for the entire show, it was easily the busiest programme I ever worked on.  Don was old school, he didn't need scripts and running orders to keep his listeners' spellbound; his knowledge was in his head, his autocue in his brain, he was a born communicator and knew how to 'work' an audience, how to make the show feel like theirs and how to keep them sitting on the edge of their seats - and the listeners loved him.

After a short spell living and working in Malta in the nineties where he married his second wife Cheryl, they returned to Minster on the Isle of Sheppey in the beautiful county of Kent, as he referred to his adopted home, in 1997, and from there re-launched his broadcasting career, tossing out the gramophone decks and needles to embrace the digital broadcasting age.

A stint as weekend newsreader for London talk station LBC followed, but his re-launch ship finally came steaming into harbour with the arrival of the new over fifties national digital service, Primetime Radio and its DAB sister station, Saga Radio. Don was back amongst the golden oldies doing what he enjoyed most, and with not a vinyl disc or a CD in sight!

When Saga Radio finally ceased broadcasting in 2006, Don emigrated to Estepona on the Costa del Sol in southern Spain. His final radio stop was with REM FM (now Talk Radio Europe), where he presented weekend shows with a mix of music, chat and celebrity guests as diverse as the entertainer Max Bygraves and the jazz loving politician Ken Clarke.

Don passed away in Spain on June 9, 2012.  He was a friend as well as a colleague in an industry that has many colleagues but few real friends.  He will be much missed but fondly remembered.
He is survived by his first wife, Yvonne, and also leaves a daughter, Moira, and a grandson, Teddy.

Ian McGregor runs Just Talking and you can read his full tribute here.
With thanks to Who’s Who in Radio by Sheila Tracy.
Posted by Andy Walmsley at 11:59