It's Time to Breakaway

Breakaway was one of Radio 4’s consumer based shows that came along in the late 1970s alongside Going Places, The Food Programme and Money Box, which started on the same day. 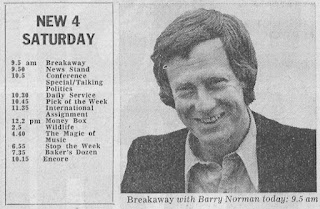 The first programme in September 1979 presented by radio ‘everyman’ Barry Norman promised a “breakaway from routine” with Sir Ralph Richardson on motorcycling with a Spanish parrot, Wynford Vaughan-Thomas on the postcards of Donald McGill and Richard Vaughan with the Sealed Knot Society.

Eventually Breakaway would confine itself to holiday reports, travel tips and the like and for a decade (1980-1990) it was hosted by Bernard Falk, best known for his reporting on BBC1’s Nationwide.  When producer Jenny Mallinson Duff left for Channel 4’s travel series Travelog she took Bernard with her. This ‘conflict of interest’ led to him being dropped from the Radio 4 show.

Subsequent presenters included Julian Pettifer, Ken Bruce, Anne Gregg, Bill Oddie, Eddie Mair, Simon Parkes and finally Pete McCarthy. For many years the show, always broadcast on a Saturday morning, was sandwiched between Sport on 4 and Loose Ends. It was finally swept aside as part of controller James Boyle’s schedule changes in April 1998.

But it’s back to July 1987 for this American Independence Day special in which Anthony Denselow visits Boston and Martin Muncaster goes to Kansas. Alongside Bernard Falk in this abbreviated recording are Susan Marling and Nigel Coombs.

This is the first of six summer posts on travel and transport.

Thanks for the radio history. we found you through radio watcher, who we connect w/ on twitter.

It's Julian *Pettifer*, and the 1998 controller was *James* Boyle (Andrew Boyle was someone else, earlier on - original editor of The World at One?).

Well spotted Robin. They slipped through the net. I shall hit myself over the head with a rolled-up copy of the Radio Times.