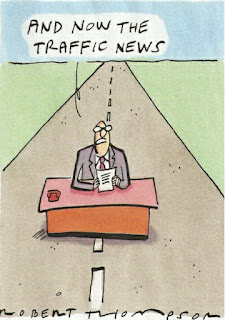 In January I wrote a short history of radio travel news bulletins. I’ve since come across this account of the formation of the BBC’s Motoring Unit from Jim Pestridge, at the time producer of the series Motoring and the Motorist. It was first published in 1965.

One of the jobs of the BBC Motoring Unit is to provide weekend road traffic reports. During the summers of 1963 and 1964, these reports were broadcast two or three times on each Friday, Saturday and Sunday, with longer periods at the Bank Holidays. For the rest of the year, there was a full reports on Sundays for the week ahead, with brief reports in Friday Roundabout and Motoring and the Motorist.

To set up the organization for these broadcasts was no easy matter. First, an experiment was carried out over the 1962 August Bank Holiday, using information from the police in four important centres. As this was not as comprehensive as we wished, Robin Richards [1] was commissioned by the BBC and the Ministry of Transport to investigate the possibility of a regular series and to find the best sources of information. It was on this latter point that we had some surprises, for no single organisation had a complete picture of the country’s traffic problems.

The police forces were obviously the best informed, but each force worked independently, being concerned only with its own area. Local authorities knew about road works in their areas, though some admitted that work by public utilities sometimes started before they had been informed. The motoring organizations relied on police information and reports from their road patrols, and the Ministry of Transport divisional road engineers were only concerned with trunk roads and Ministry ‘schemes’. All this information concerns ‘foreseeable’ problems, such as road works, bottlenecks, sporting meetings, events where crowds would gather, and any necessary diversions.

The information about ‘unforeseeable’ happenings would have to come mainly from the police and the patrols of the motoring organizations. This would cover such things as accidents, fires, burst water mains, floods and the re-routing of traffic due to any unforeseen cause.

Discussions were held with all concerned and the Conference of Chief Constables, on behalf of all police forces, agreed to co-operate in the series of broadcasts planned for the summer of 1963. The motoring organizations willingly shared all their information and the Home Office and the Ministry of Transport approved the plans. To cover one other hazard of the roads, the Meteorological Office gave us help by arranging for their Weather Centres to report serious changes in the weather conditions which could affect motoring. On our part, it was decided to restrict the coverage to England, Scotland and Wales, because the traffic problems of Northern Ireland were not so serious, despite a length of motorway and the parking situation in the city of Belfast.

By Easter, 1963, the Motoring Unit had an office and studio in Broadcasting House and the reigning Minister of Transport, Mr Ernest Marples, came along to launch the service and to give us just the encouragement we needed. Three of us took it in turns to prepare and broadcast the traffic reports at weekends – Robin Richards, who undertook the original survey, Bill Hartley [2] and myself.

The first summer’s operations were successful and many listeners wrote with praise or useful criticism; the police, too, thought it had been a useful service, if only to make motorists more aware of the problems on the roads. During the winter that followed, a reduced number of reports at weekends kept the service going until the summer of 1964. Previously most of the broadcasts had been in the Light Programme, but now they were also heard in the Home Services, giving specialised regional information.

The details for 1965 are at present being worked out, and it will be our intention to continue the service with a number of short, regular reports at weekends. The times of these will appear in the Radio Times.

The best way to use the service is to have a set of maps covering your route, then to listen to as many reports as possible – especially the Sunday morning reports in the Light Programme which covers the main congestion spots throughout the country. Quite often, it is possible to select a route avoiding any congestion, and though it might be a few miles longer, at least it will avoid the frustration of a lengthy queue. This country is still big enough to have some quiet by-roads just suited for unhurried holiday trips – and what pleasure there is in finding again an open road.

On the road it is well worth listening to the traffic reports because often there is something unforeseen to report, together with the latest news of congestion gathered from the police information rooms just prior to the transmission. In addition, if something really serious happens, we have an opportunity to broadcast it as a ‘flash’ of information at a programme junction or other suitable break.

Of course, it is impossible to mention every traffic jam and some spots are so well known that repetition would be tedious. So, if we don’t mention your own special hold-up, or if the information is a little late or out-of-date, remember we are looking at the country as a whole. The excellent service we get from the police may not be fast enough to cope with the speed at which congestion builds up on our crowded roads. Perhaps, one day, we may have our own helicopters and closed-circuit television – and a separate channel on your radio!

Well Jim wasn't far wrong. By 1987 the BBC was launching the Radio Data System (RDS) and the provision of travel information came under the province of the Travel Centre based in the first floor extension of Broadcasting House managed by former radio producer Irene Mallis.[3]

A member of that first Travel Centre team was freelance broadcaster Tony Barnfield who recalls working alongside announcer David Willmott, Dennis Collison (who Tony Blackburn christened ‘Denise Collision’ when they worked together on BBC GLR), Simon Parkes, David Prest and Moya O’Shea. He told me:

In the early days of RDS, AA Roadwatch had already cornered much of the broadcast travel news market where it was not being provided by local stations themselves, but the Travel Centre had permanent lines to BBC GLR (at weekends mainly, where Chris Evans had a Saturday morning show), BBC Radio Kent (Pat Marsh, Barbara Sturgeon, etc.), BBC Essex (Liz Mullen among others) and BBC Radio Bedfordshire (Mo Dutta, Jamie Crick and Alan Dedicoat among the regulars there then) and whoever was on duty at Broadcasting House monitored and broadcast their local travel news live, chatting to the drivetime presenters morning and afternoon, as well as popping up hourly on the newly-arrived BBC Radio 5.  We also turned up on BBC Radio Gloucestershire and BBC Radio Bristol, usually around 5.30 a.m.  Whenever the local station faded us up, the RDS signal was triggered.

We even had a travel flash on Radio 3 one time when traffic became gridlocked in the area of the Royal Albert Hall and members of the orchestra were delayed as well as the audience, so the concert start was delayed considerably!


This is the second of six summer posts on travel and transport.

[1] Robin Richards had been a motor dealer before becoming the BBC’s motor sport commentator.
[2] Bill Hartley was a motoring journalist and broadcaster who presented Motoring and the Motorist for sixteen years.
[3] Irene Mallis was on the launch team at BBC Radio Devon and was producer and editor of the Radio 4 travel series Going Places. She is now a media consultant.

I was reading your post and noticed that there is a broken link in the article. You included a link to Irene Mallis' business at the bottom of the post but it is not working. This is the correct page: http://www.communicatemedia.com/irene-mallis/ (it looks the same as the old on though). By the way, I really like your blog :)