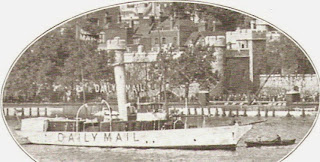 Nearly four decades before the launch of Radio Caroline another offshore ship could be heard, well sort of, around the coast of Britain. That ship was the steam yacht Ceto. The year was 1928. Now largely forgotten it could, assuming they’d actually got the transmitter to work properly, have changed the history of commercial radio.


The initial idea sounds a familiar one: fit out a ship with a transmitter and sail it round the coast just outside territorial waters broadcasting music and adverts. It was the brainchild Valentine Smith, head of publicity for the Daily Mail Group. Essentially the whole exercise was to shift more copies of the Daily Mail, the Sunday Despatch and the Evening News.
Unfortunately transmission tests didn’t go well. Moored three miles off the coast the swaying of the SY Ceto’s transmitter couldn’t produce a strong enough signal. Undeterred Smith decided on a Plan B: remove the mast and replace it with large amplifiers and four powerful Siemens speakers. The ship could then tour the coast of Britain just a mile or two out and ‘broadcast’ to holidaymakers with no more than a giant public address system. 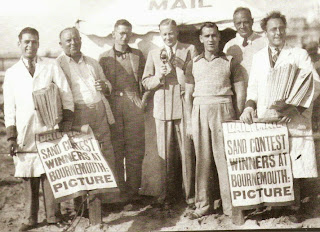 They needed presenter to play in the records – supplied by HMV – and read the commercials. It was a young Cambridge undergraduate named Stephen Williams (pictured centre above in Bournemouth) whose name was put forward. He’d written to Leslie Mainland of the Daily Mail asking if there was anything he could usefully do over the summer recess. Little did he know that this early broadcasting experience would lead to such an illustrious career with Radios Normandy, Luxembourg and the BBC.
The voyage of the Ceto started at Dundee in June 1928 and then down the east coast, along the south coast and back up the west before ending up off Blackpool by the August Bank Holiday. En route such was the publicity surrounding the vessel that they’d stop off at various resorts to be welcomed by civic dignitaries and ‘broadcast’ special concerts. The Ceto’s final tour of duty took her back round to London mooring up at Tower Bridge on 1 September, by which time Stephen Williams and the crew had visited 87 resorts and coastal towns and undertaken 300 broadcasts.


The sound equipment on the ‘Musical Yacht’ was dismantled and she returned to pleasure cruising. Williams returned to Cambridge. From a publicity point of view it had been a great success but the technical difficulties were not overcome until a few years later when the short-lived station RKXR broadcast off the California coast in 1933. However, it was a further thirty years before the first true commercial offshore station, in the form of Radio Mercur, launched off the Danish coast, itself inspiring the launch of Radio Caroline some six years later.
You can read more about the SY Ceto on the pages of the Offshore Radio Museum website.


There’s an interview with the late Stephen Williams conducted by Roger Bickerton on the Diversity website.
The illustrations in this post come from the excellent book telling the story of a pioneer of early commercial radio, Leonard Plugge.  And the World Listened is written by Keith Wallis and can be obtained from KellyPublications.