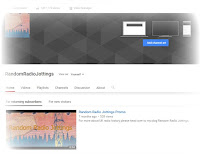 Earlier this month I hit 1 million views on my YouTube channel. Now I'm not suggesting those stats are 100% reliable or that every minute of every upload has been viewed assiduously, but I thought it worth reflecting on what people have been watching and listening to.

I started the YouTube channel to accommodate any radio-related TV material and the One Day in the Life of Television clips for my Random Gubbins blog. I then began to upload radio programmes for two reasons: one to give them a wider audience than they might otherwise have got via this blog  and secondly I found some folk were copying my audio and uploading it wholesale without any credit. So, if you can't beat 'em, join 'em.

So what's been grabbing your attention over the last five years. Here's my Top 10 of most viewed uploads in reverse order.

10: Gulf War - BBC Breakfast 17 January 1991 (16k+ views)
It was all kicking off in the Gulf in 1990 and 1991 and I filled a couple of tapes with the ongoing news coverage. This recording includes the full opening sequence for BBC Breakfast News and the first quarter of an hour or so on the day Operation Desert Storm started.


9: News at Ten - 27 November 1990 (16k+ views)
At the time I was in the habit of filling up the end of my E180s with a bit of news or some continuity. This is News at Ten with Alistair Burnett and Julia Somerville on the day John Major became PM.


8: DJ Heaven - Jimmy Saville (20k+ views)
DJ Heaven was a 1993 BBC2 series that was essentially archive clips from Top of the Pops all linked by the same DJ. Each programme had a mini biog at the start and it's these I uploaded in 2011 for Tony Blackburn, Simon Bates, John Peel, Mike Read, DLT and Saville. Little did I know that a few months later Saville would die and about a year later the full scale of his sexual abuse came to light. I've had comments clamouring for this, and the 20 Years of Jim'll Fix It programme, to be taken down but I've resisted wiping out this part of our popular cultural history no matter how distasteful it is in retrospect.

7: Tim Gudgin on Grandstand (21k+ views)
I posted this clip of Tim Gudgin from an October 1998 edition of Grandstand about the time Tim retired from reading the classified football results. Consequently it got embedded in a few sports and news sites so bumping up the number of views. Type 'Tim Gudgin' into Google and it comes up as the second item.


6: Classic Trucks - Ticket to Ride (24k views)
It may surprise you to see this 1995 Channel 4 documentary about post-war buses until you realise its narrated by John Peel. Consequently its had interest from transport websites and the John Peel wiki site


3: Sunday Dinner - Radio Memories (51k views)
A heady dose of nostalgia here. This was an interesting piece to put together. It's taken from BBC2 and Radio 4's Arena Radio Night in December 1992. At this point in the evening the two soundtracks differed: on TV just the sounds of people preparing Sunday lunch (or is that dinner?) over some black and white film whilst Radio 4 listeners heard a selection of clips from radio programmes and reminisces from listeners about their Sunday memories. I put the two together to form this 12-minute sequence.


2: University Challenge - Pro-Celebrity Edition 1992 (77k+ views)
This is the programme that eventually saw the return of the venerable TV quiz to BBC2 in 1994. Here it's the original question master Bamber Gascoigne that returns for this one-off edition as part of a BBC2 Granadaland theme night. A team from Keble College Oxford, winners of the last ITV version of the show, take on a celebrity team of former winners: Alistair Little, John Simpson, Stephen Fry and Charles Moore.


Storming in at number one is the shipping forecast! To my knowledge this is the only time it's been read on both radio and TV. In this case the honours fell to Laurie MacMillan (who also does a bit of joint TV and radio continuity at the end). Again this is an excerpt from Arena Radio Night, with BBC2 viewers been treated to shots of crashing waves and fishing boats. It's amazing how evocative the forecast is, as evidenced by the many comments.

I hope you're very proud of all the horrible creepy anorak denialists who have made number 8 so popular.

I wouldn't say I was proud Robin, just reporting the stats. It was posted when he was still alive and the majority of comments would suggest those seeing it are not denialists.