Life at the ZOO 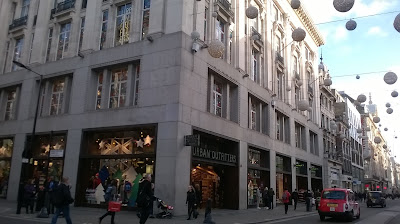 The hundreds of shoppers who daily pass by Urban Outfitters and Schuh on London's Oxford Street will be unaware that the building above them played a part in Britain's wartime broadcasting effort.  Yet it was the place where George Orwell broadcast to India and Ed Murrow to the States. It was where John Arlott started his career as a radio producer, at one point working alongside a young David Jacobs. And it was where a girl in the typing pool called Jean Metcalfe got her first opportunity to be in front of the microphone.

Behind 200 Oxford Street cut through Great Portland Street and then take a right down Market Place and there's a clue for those that spot the plaque on the wall just next to the entrance of what is now known as Orwell Studios. It reads: "From June 1942 for fifteen years, this building was the headquarters of the BBC Overseas Services. During the war direct broadcasts were made to America from the roof while air-raids were in progress, The BBC vacated the premises in November 1957". 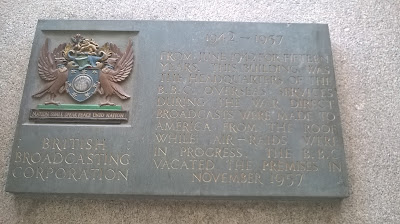 In the early days of the Second World War the BBC was asked by the Government to treble its output abroad so increasing the scale of both its Overseas and European Services, then based at Broadcasting House.  Also for security reasons some departments were being re-located, hence the move out to Wood Norton in Worcestershire for the likes of the drama staff.

During 1940 the various parts of the BBC's Empire Service found itself split up over three sites. Most of what would be the European Services was shifted to Bush House - after having first being evacuated to Maida Vale - others were billeted to Aldenham House in Hertfordshire and Abbey Manor near Evesham.

In June1941 BBC engineers indentified the basement of what was then the Peter Robinson department store, just round the corner from Broadcasting House in Oxford Street, as suitable for wartime studios. A surprising decision perhaps as the store had been ravaged by bombing in September 1940 - Broadcasting House itself was hit the following month.

Anyway the menswear department moved out of the basement and the BBC moved in to build the nine (later thirteen) studios and a control room. Some office accommodation was then added to the floors above and from June 1942 staff from both Aldenham House and Abbey Manor moved in.

In fact, as the plaque in Market Place attests, this wasn't the building's first association with broadcasting. During those famous Ed Murrow rooftops descriptions of London throughout the Blitz, the US correspondent had used the top of 200 Oxford Street as one of his vantage points, though he never revealed this at the time. 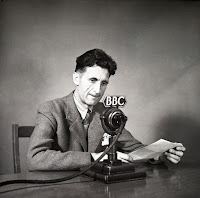 Although the upper floors of the building are now named after George Orwell, his time at the BBC as an Eastern Services producer and broadcaster were described by the novelist as "two wasted years." His diary reflects that "much of the stuff that goes out from the BBC is just shot into the stratosphere, not listened to by anybody".

Staff at 200 Oxford Street would jokingly refer to the building as the ZOO. The studios themselves were perhaps not best placed for noise pollution from the nearest tube line. Edward Pawley's history of BBC Engineering explains: "Just as the noise from the Bakerloo Tube could be heard in the basement studios of Broadcasting House when it was opened in 1932, the noise of the underground trains on the Central London Line could be heard in some of the studios at 200 Oxford Street, which were about 50 ft below ground level. It was, in fact, possible to distinguish the arrival and departure of the trains, and the opening and closing of their doors. One of the many overseas visitors who came to visit Bush House after the war claimed that he had been able to identify a particular studio when listening 5000 miles away by the sound of the underground trains — and he was right."

Before her time presenting Forces Favourites (later Family Favourites) Jean Metcalfe had joined the BBC's General Office in the summer of 1940. She soon moved across to the Empire Service to help deal with the fan mail that came in for the announcers. Jean takes up the story of how she got her break into broadcasting: "the Service was expanding with the need to keep overseas territories in touch with London and soon we were moved from our makeshift office in the Restaurant Annexe of Broadcasting House, with its food smells and plasterboard partitions, to 200 Oxford Street, the old Peter Robinson building. Now there were dozens of us working twenty-four hours a day on the Overseas Service. My work became more clerical than secretarial, thank God, and even brought me glimpses of the studios below grounds. One joyous day, May 24th 1941, Noel Iliff asked me to read Thomas Nashe's poem Spring, the sweet Spring in a programme he was producing, Books and People at 1500 GMT. The refrain 'Cuckoo, jug-jug, pu-we, to witta-woo' would sound silly, he said, in the deep voice of the presenter, the novelist Gerald Bullet. It sounded pretty silly in mine too, I thought. However, it didn't matter if only a handful of homesick Kenyan planters would hear me, I was on the wireless - at last." BBC producer Trevor Hill was one of the BBC staff, at that time a Programme Engineer, who made the move round the corner to Oxford Street where he worked on Radio Newsreel and many other programmes: "My job, when I started work at 200 Oxford Street in the Continuity Studios, was to play music on gramophone records besides complete programmes recorded by the BBC on seventeen-inch 'slow speed' discs. That was in the days before microgrooves had been invented. The BBC slow speed records would have things like Front Line Family recorded on them. Then there was the Epilogue. On a particular Sunday evening when I was working in the Continuity Studio for the Pacific Service I had a very nice Australian announcer on duty with me, Isabel Ann Shead. The trusting Ann turned to me and asked what was next on that day's Routine Transmission Schedule. I consulted the document. 'Oh, it's the old E-pill-o-gog,' I replied facetiously. Miss Shead went into action. 'This is the Pacific Service of the BBC.' We were allowed the slightest reverential pause for such a Sunday transmission. 'The E-pill-o-gog!' declared the good lady for all to hear."

David Jacobs was briefly based at 200 Oxford Street after the war when he joined the BBC as an announcer in a team that included Jack de Manio, Jean Metcalfe and Mary Malcolm. His recollection of his time there seems to be full of japes: "for instance during a band show at Hammersmith Palais de Danse, where I was sharing announcing duties with Mary Malcolm, Mary turned to me before one number and said 'I can't think of anything, David - what shall I say?' 'Oh, say the next tune reminds you of the film Sweater Girl,' I told her. Mary had not time to sort this out. She trustingly stepped up to the microphone and announced to a large section of the English-speaking world: 'The next number always reminds me of the film Sweater Girl. ladies and gentlemen, The Jersey Bounce!' And her horrified 'Oh, David, you're dreadful!' also went winging out on the waves before she stepped back again."

But it wasn't all high jinks for David. For a while he was also one of the readers on Book of Verse, produced by a recent recruit to the BBC staff, one John Arlott. David recalls:"One of the things John taught me was how to get a story told in thirty seconds or a minute with a beginning, a middle and an end. he had me looking out of the window of his room overlooking Oxford Street and said, 'Righto, here's a watch. I want you to tell me what's happening in that street. You have to start when I tell you and when it comes to thirty seconds you've got to be halfway through and knowing you've got thirty seconds to finish and at the minute you've got to have finished. Not a minute and one second, a minute.' He had me doing that for quite a time, which I found very attractive for two reasons. One, that he should take the trouble to do it, and two, that he was concerned that I should learn. Ever since, it's been very useful, because if somebody says ' Will you give me thirty seconds,' I can count in my head and do it."

There's footage of the exterior of the buidling dating from 1953 on the Getty Images website.

The BBC continued to occupy 200 Oxford Street until late 1957 by which time any remaining staff were moved over to Bush House. The building then reverted back to retail use and was occupied by C&A for over forty years until the company closed down its UK business in 2001. 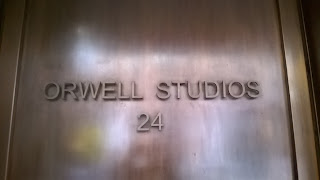 In 2006 the site was redeveloped by ORMS Architectural Design on behalf of Redevco (the ultimate owners of C&A's property portfolio) to create the retail space for Urban Outfitters and Shuh and then apartments above named Orwell Studios. With that rooftop view from which those wartime broadcasts were made you can now occupy a 2-bedroomed penthouse apartment for £1.7m.
Posted by Andy Walmsley at 15:00