The Carnival is Over 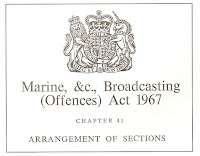 So begins one of the most significant pieces of UK broadcasting legislation, the infamous Marine, and &c., Broadcasting (Offences) Act 1967, enacted on 14 July 1967 and coming into force a month later, exactly 50 years this coming Monday.

Plenty has been written about that golden era of the offshore pirate stations and the machinations that ensued to kill them off - I have a large selection of such tomes on my bookshelf - so I'll not attempt to summarise it here.

What better way to celebrate the pirate radio days than with a couple of airchecks from two veteran broadcasters. I'm not sure how widely available these recordings are but they were given to me by ex-City and Caroline DJ Tom Edwards.

Firstly from 6 September 1966 its Roger 'Twiggy' Day "moving and grooving" on his evening show on Radio England.

The second offering is Paul Burnett broadcasting on Radio 270 off the coast at Scarborough. This is part of the breakfast show from 14 February 1967.

Over the weekend you can relive the Swinging Sixties on Pirate Radio Essex live from onboard the LV18. And on Monday evening over on BBC Radio 2 there's Johnnie Walker Meets ...the Pirates.