Not the A to Z of Radio Comedy: H is for Hot Club 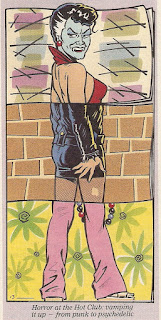 The Hot Club was a blink and you'll miss it 6-part series broadcast on Radio 2 in 1990 and not heard again since.

Billed as "wit, spit, music and madness" it starred Arthur Smith, at the time familiar face at the Edinburgh Fringe and on Channel 4 and a familiar voice on radio's The Good Human Guide and Peter Dickson's Nightcap. With Smith were Comedy Store alumni musician and comedian Ronnie Golden with Josie Lawrence and Richard Vranch, both regulars on Channel 4's improv show Whose Line Is It Anyway?

Previewing the series for the Radio Times in January 1990 David Gillard wrote:

Putting the heat on in Radio 2's newly opened Hot Club are compere Arthur Smith and singing comics Ronnie Golden, Richard Vranch and Josie Lawrence. each week they'll be bringing their wit to bear on a different topic - from Romance and War to Holidays and Horror. There'll be pastiche musicals among the gags and sketches - 'all in a variety of styles: heavy metal , protest, flamenco, Mowtown, that sort of thing' explains Richard. There'll also be original numbers by the cast - like Josie's off-beat antidote to all those gushily Gallic songs of springtime sentimentality, Paris in March.

Both she and Richard came to comic prominence through TV's Whose Line Is It Anyway? and London's Comedy Store. Richard has been the music director of the Cambridge Footlights revue whilst Josie has appeared on TV as an ad-woman in Campaign and a murder victim in Poirot before moving  on to the comic road. Wary of being pigeonholed, she insists: 'I'm an actress who happens to be doing comedy, not a comedienne.'

Meanwhile it's sizzling songs and sketches that are keeping both on the boil. Hot stuff, indeed.

There are some now familiar names amongst the writing credits: Mark Burton and John O'Farrell who jointly received the BBC Radio Comedy Writers Bursary in 1988 and worked on Week Ending and Spitting Image. Also from the Week Ending writer's room are Mark Brissenden, Simon Bullivant, Michael Dines,  Alan Whiting and Bill Matthews.

The producer is Lissa Evans.

I only have the third episode in my collection, taking war as its theme. This was broadcast on Radio2 on Tuesday 30 January 1990 and gets its first airing in 29 years.

Thanks very much for providing this Andy.

Thank you Andy. Love your postings from the 80s and early 90s