Down Your Local - 50 Years of BBC Radio Tees

The opening words came not from the station manager or the local mayor but from Selena Thirkell of Jedburgh Street, Middlesbrough, an usherette at the ABC in Stockton, who'd been selected at random from a bus queue earlier that day. The second voice was Alf Garnett ranting "I don't know where bloody Teesside is." Hopefully Mary Whitehouse wasn't listening.

The station's first manager was Allan Shaw, who'd moved up from Radio Leeds where he was a keen advocate of extended bulletins of local, national and international news, something that he brought to Teesside with the 15-minute Teesside Today (7am and 8am), Teesside at One and Tonight in Teesside (both 30 minutes). Allan relocated to Radio Manchester in 1975.

Radio Teesside broadcast on VHF only at 96.6 MHz, though Rediffusion cable listeners could also hear it on Channel B. The medium wave transmitter on 1546 KHz, or 194 metres, was added in 1972. In 1984 the station moved out its original studios on Linthorpe Road, Middlesbrough to purpose built accommodation on Newport Road. 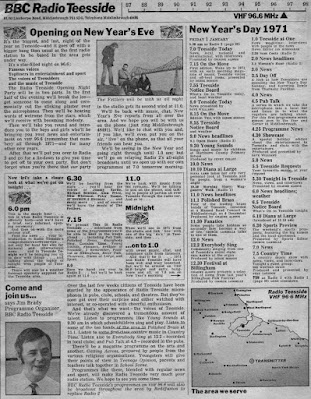 On that opening night the first programme was Teesside Tonight introduced by sports editor George Lambelle and the news read by Jim Brady. George was an ex-Northern Echo journalist who'd worked for the BBC North Home Service. He stayed with Teesside/Cleveland for 30 years. One of the reports is by Eric Sumner who'd become familiar voice as a newsreader on the station. Another reporter, Jim Latham, would go to be news editor at Radio Humberside.

Derek Hobson was on hand for the next hour or so to introduce some of the voices that would appear on the station as well as some special guests that included Warren Mitchell, Les Dawson, Michael Bentine and Peter Noone. Derek would present the breakfast show On the Move for the first year, then it was down to Birmingham where he presented ATV Today and New Faces though he did return to radio in 1979/80 filling-in for Jimmy Young, John Dunn and Pete Murray on Radio 2.

Later on the opening night the station headed up to midnight with Dave Williams playing the music including a live contribution from The Fettlers, a phone call to the Lion Inn at Blakey Ridge and a report from Middlesbrough police station "are you expecting many villains in tonight?" There then followed a somewhat bizarre OB from the Fiesta Club in Stockton in which the planned entertainment had failed to arrive so broadcaster Mike Hollingworth and former Top of the Pops dancer Linda Cunningham provided the impromptu cabaret. Mike then proceeds to talk to some of the clientele where one bloke tells him to piss off and he asks a young lady "do you come here often?".

Fortunately a large chunk of the first night was recorded and is online (with thanks to John Foster):

In this blog post I am, in the main, recalling some of the early voices that you'd have heard on the station. For a great look at the station's early history can I also direct you to Stan Laundon's website here.

On the first full day of broadcasting, Friday 1 January 1971, presenting Diana at Large is Diana Lamb. At the time she applied for a job at the station Diana was living in Saltburn and very active in what was then known as the Confederation for the Advancement of State Education. Allan Shaw had read about her campaign work and remembered her name when her letter dropped on his desk. She'd already lived a colourful life: meeting her first husband on a march against Oswald Mosley's British Union of Fascists and moving to Stockton where they were both active Labour campaigners. When the marriage broke down she eventually started farming single-handedly on a smallholding in Co. Durham. Her second marriage to Sidney Lamb, who worked at ICI at Billingham, also failed which is how she ended up on her own in Saltburn. Diana at Large ran four times a week until 1978 at which time she moved to Devon and later Cambridge where she continued her campaigning work against local authority decisions. She died in 2003.

The breakfast show titled  On the Move continued throughout the decade but by 1981 was known as AM194. As well as Derek Hobson presenters in the 70s included Brian Smart (ex. Radio Merseyside) , Tony Baynes (also on Radio Durham now enjoying retirement in France), Keith Harrison (left in 1978 moving to Radio 2 as a producer e.g. Round Midnight, Two's Best and John Dunn then in-vision continuity announcer on Channel 4 and on  LWT) and Dave Eastwood (ex. BFN, Radio 1 Club, later Piccadilly, City, Luxy and Essex Radio). 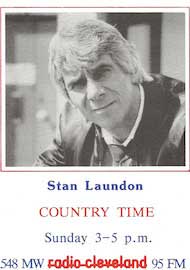 Country Time with Stan Laundon. A long-running country music show that ran until December 1992. Stan's history of the show is here. Stan presented and produced other shows for the station such as Time for Melody, the drivetime programme Home Time and Saturday Sport.

Polished Brass dedicated to the music of brass bands and presented by Graeme Aldous, ex drama teacher and Technical Operator for the BBC in Belfast. Left in 1985 and ran an audio-visual production company.

Focus on Folk was presented by musician Stewart Macfarlane, aka Big Mac, the frontman of the folk band the Teesside Fettlers. Stewart also broadcast on TFM and Century. He died last month.

Housecall a programme of music together with listeners poems, letters and stories that ran for nearly 30 years. The regular presenter for many years was Mike Hollingworth, and then Bill Hunter until it ended in October 1999.


Some of the broadcasters on Teesside in the first decade included:

Ann Davies: presenter and producer mid-70s with programmes such as Home Time and All in a Day's Work. Worked for the station in the 80s & 90s. 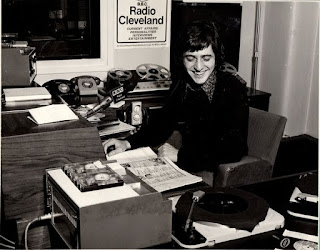 Paddy MacDee (pictured above): was heard across the north-east for five decades. He joined Teesside in 1973 presenting Saturday Scene. Moved up to Metro Radio in 1978 and re-joined the BBC at Radio Newcastle in the mid-80s. His Sunday Solid Gold show came to an end in March and he retired in July.

Peter Cook: sports presenter who was a former Look North reporter in the 1960s. Left in 1978 and in the 90s set up Now & Then regional magazine.

Julia Shaw: with the station in the late 70s including the afternoon sequence Here and There. Later on Radio Newcastle. 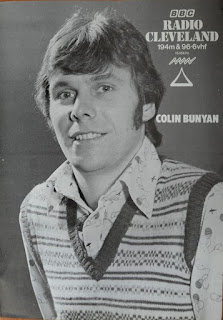 Colin Bunyan: the longest-serving presenter currently on BBC Radio Tees having joined Radio Cleveland in 1974 though he did appear on air before that, as a guest on Colin O’Keefe’s River Talk in 1971. He's presented Vintage Vinyl for 26 years. 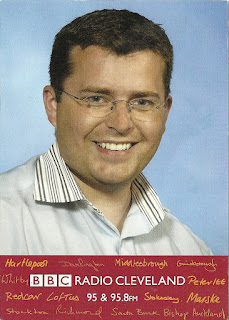 To mark the 40th anniversary of the station in December 2010 John Foster (pictured above) presented and produced this programme.


In April 1974 Radio Teesside became Radio Cleveland, a name change to match the creation of the new Cleveland County Council. Staff had been given the chance to vote on the name change and Cleveland just scrapped through, though manager Allan Shaw later said he regretted the switch. The council name disappeared in the 1996 local government review but Radio Cleveland carried on to August 2007 when it became BBC Tees and, from January this year, added the 'radio' back to become BBC Radio Tees.

From the Cleveland era comes this promotional leaflet from around 1982 or 1983. 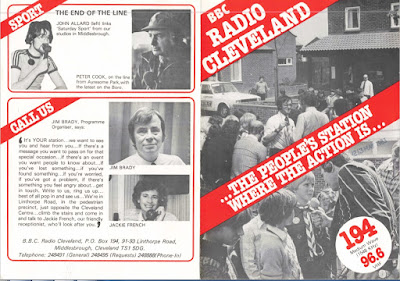 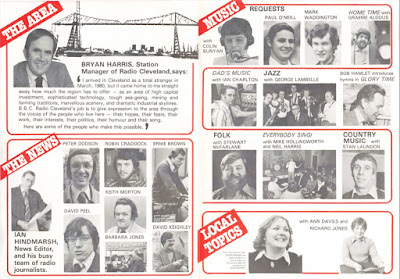 This is the programme schedule for the week 10 December 1988 by which time local lad Mark Page was on weekday breakfast following his time at Radio Tees and Radio 1. On mid-mornings was ex-Radio Tees jock Graham Robb. 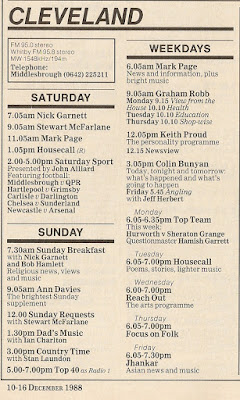 John Allard was the sports editor at this time and it was he that brought Alastair Brownlee to the station as a sports reporter and commentator initially phoning in away-game reports for the station in exchange for a free match ticket and a fee of £13. So closely associated was he associated with Middlesbrough FC that he became known as the 'Voice of the Boro'. He moved over to Century Radio when they acquired football rights in 1995 but he was back at BBC Tees in 2007 until his untimely death in 2016 aged 56. The station broadcast his tribute to him.

Some other voices you'll have heard on Radio Cleveland/BBC Tees include:

With thanks to Stan Laundon, Colin Bunyan and David Ballard.

I'm trying to contact Ernie Brown, who used to work for BBC Radio Newcastle, and who is mentioned in this blog. If anyone reading this knows how to contact Ernie directly, I'd be very grateful to hear. Any replies to this comment will be forwarded to one of my email addresses, I think.

Many thanks for any help.