Not the A to Z of Radio Comedy: M is for Marks in his Diary

Marks in his Diary was a star vehicle for Alfred Marks, one of the old school of British comedy actors who'd come up through the Armed Services/Windmill Theatre route. The set-up was that Marks would be reading through the events of the week from his dairy which would lead to various comedy sketches and comic songs.  Supporting him in the first series were David Jason (still very much a regular radio voice on Week Ending, The Impressionists and The Jason Explanation), Miriam Margoyles and doctor turned comedian Rob Buckman.

Alfred Marks was 'discovered' as a radio star in 1946 in the series Beginners Please and got his first regular radio gig alongside Peter Sellers and Benny Hill in Starlight Hour. He continued to appear in Starlight Hour in the early 1950s as well as the usual guest spots on Music Hall, Worker's Playtime, Variety Bandbox and Show Band Show. He got joint star billing with singer Anne Shelton in Double Top, with comedy lines supplied by Sid Colin.

Diaries featured in the early 50s Home Service show Home at Eight which included a feature called Mrs Doom's Diary, a spoof on the hugely popular Mrs Dales' Diary, in which Hermoine Gingold was Mrs Doom and Alfred Marks her doom-laden husband Edmond. In the first series their son was played by one Richard Attenborough.

Work in the theatre, films and tv followed and when ITV started Alfred became one of its earliest faces thanks to the series Alfred Marks Times (1956-61). He was back on the radio in the late 60s/early 70s as an occasional panellist on Does the Team Think? and in 1972 Frank Muir chose him to read out some of the comedy lines and poems for the anthology series Frank Muir Goes Into... This ran at intervals until 1991. 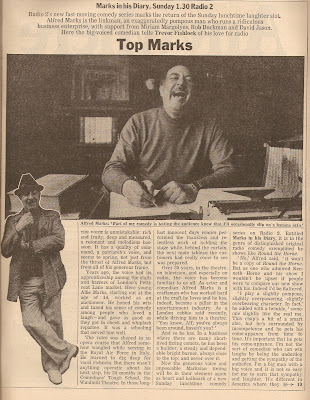 Scripts for Marks in his Diary were supplied by relative newcomers including Laurie Rowley (The News Huddlines) and Terry Ravenscroft (who'd been writing for Ken Dodd and Les Dawson) joined by some rising Oxbridge stars Jimmy Mulville, Rory McGrath and Clive Anderson. The series producer is Griff Rhys Jones, already with two years of radio LE experience under his belt mainly on Week Ending.

The music was by David Firman, at the time already providing the musical support on Week Ending. and perhaps best known. certainly on the telly, for his work with Victoria Wood

A further two series of Marks in his Diary followed in 1980 for which Miriam was replaced by Judy Carne (the ex-Laugh-In  actress who'd recently returned to the UK) and Rob Buckman by Hugh Thomas. For the final series in 1981 Miriam was back with support from Hugh and now Fred Harris or Chris Emmett. Taking over as producer was Jonathan James-Moore.

Here's the first edition of Marks in his Diary as it was broadcast on BBC Radio 2 on the afternoon of 1 July 1979.

From a couple of weeks later the third edition as heard on 15 July 1979. To my knowledge, other than the in-week repeats, neither of these programmes have been heard since.

Fantastic that you've kept these for posterity, although the comedy on show argues the case for the 'alternate comedy' scene developing at this time!
Thank you for posting, as always.