Ask anyone who grew up in the 60s and 70s about their memories of Sunday afternoons and chances are they’ll mention the family roast lunch with Family Favourites on the radio in the background. They might also mention the comedy show that followed, such as The Clitheroe Kid, Round the Horne or Hello Cheeky. Later in the day, if the wireless was still on there’d be Pick of the Pops and Sing Something Simple.

I’ve looked back at some old schedules to see how this seemingly collective memory of Sunday radio actually played out. 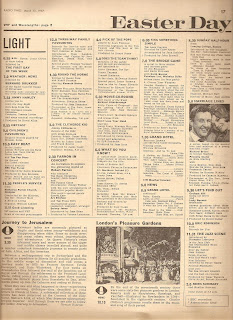 Firstly back forty-four years to the Light Programme at Easter 1967. Sure enough between 12 noon and 1.30 p.m. is Three-Way Family Favourites with Jean Metcalfe. Note the use of Three-Way as the programme linked London, Cologne and Cyprus.


At 1.30 p.m. we get Round the Horne followed by The Clitheroe Kid. Result! Between 4 and 5 p.m. Alan Freeman presents Pick of the Pops and sure enough at 6.30 p.m. The Cliff Adams Singers and the Jack Emblow Quartet are on the air.

Of the programmes listed that day the only one still going strong today is, of course, Sunday Half-Hour. Note too the presence of some broadcasters who went on to become Radio 2 stalwarts – Humphrey Lyttelton, Benny Green, Michael Aspel, John Dunn

Fast forward six and a half years to Radio 2 in September 1973. Family Favourites is there at noon now presented by Sandi Jones. This is followed by The Navy Lark, then on its 12th series and a regular fixture on Sundays. The chart show, now presented by Tom Browne, is on Radio 1 from 4 p.m. and carried on Radio 2 as well between 6 and 7 p.m. Sing Something Simple follows after the news at 7 p.m. This programme continued at various times on Sunday afternoon, except for a period between 1974 and 1978 when it aired on either Wednesday or Friday nights, until its demise in 1981.

Note the regular presence at 9 p.m. of Your 100 Best Tunes with Alan Keith. Though this programme had already been running for fifteen years, back in 1967 it was on the Home Service and not the Light.


OK time for some audio memories from Sundays past.


The genesis of Family Favourites can be traced back to the programme Forces’ Favourites that started in 1941 on the General Overseas Service, before moving to the Forces Programme between 1943 and 1946.


Family Favourites itself launched on 7 October 1945 on the Light Programme. In 1960 it moved to its Sunday lunchtime home and became Two-Way Family Favourites though, as we have seen, it was occasionally billed as Three-Way and for a while also had the prefix Worldwide.  By the end of the 60s it was back to plain Family Favourites until it ceased as a stand-alone programme in early 1980.


Its best known presenters at the London end were Cliff Michelmore, Jean Metcalfe, Michael Aspel, Sandi Jones and finally Jean Challis. The theme music, Rodgers & Hart’s With a Song In My Heart, was most famously arranged and played by Andre Kostelanetz and his Orcherstra. By the late 70s the arrangement was one by Norman Candler (aka Gerhard Narholz).

This is an except from the penultimate show on 6 January 1980 hosted by Jean Challis. 

The show was revived in July 1995 as part of Radio Two’s celebrations of the Light Programme, fifty years after its creation. Sandi Jones was back in the chair for this show.
 


The programme returned again on 30 September 2007 as part of Radio 2’s 40th anniversary celebrations. This time the host was Michael Aspel.

Here’s an excerpt from Sing Something Simple from July 1995. The opening theme will instantly be recognised by anyone who spent their Sunday afternoon recording the hits from the Sunday chart show and left the tape running.


And finally a taste of what you would have heard on Radio 2 just 21 years ago on Sunday 22 April 1990. This montage compresses twenty-four hours into just one.

I’ll be posting more from Alan Dell and Benny Green in coming months so watch this blog.
Posted by Andy Walmsley at 17:18