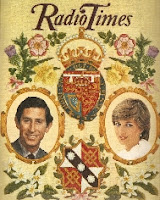 Thirty years ago there was another Royal Wedding and BBC Radio 5 Live has this week been recalling the events and people of 1981.
I have no audio from the radio coverage of Charles and Diana’s wedding day; I recall that we watched much of it on TV and then went round to a friends and had a few beers in their back garden. But let’s look how BBC Radio broadcast the events of Wednesday 29 July 1981.

The main coverage was between 7.30 a.m. and 2 p.m. on Radio 2 and simultaneously with Radio 4 from 9.45 a.m. Terry Wogan kicked things off with his show from outside Buckingham Palace. The main event was introduced by Richard Burton, yes that Richard Burton. He told Radio Times that “I will be writing my own script, and using my own acting knowledge of Shakespearian notables to flavour it.” Commentary was also provided by experienced broadcasters: Wynford Vaughan-Thomas, Alun Williams, Peter Jones, Brian Johnston and Robert Hudson (the radio equivalent of TV’s Tom Fleming) – all sadly no longer with us. Providing the contrast was Rolf Harris and Lorraine Chase!
On Radio 1 that day Mike Read was on The Breakfast Show between 7&9 out on the streets of London, although he found the streets pretty empty as everyone was packed on The Mall. Following Mike was Simon Bates including a feature on royal brides throughout the ages. At 11 a.m. Andy Peebles hosted the Roadshow from Trafalgar Square. After Newsbeat with Peter Mayne it was back to business as usual with Paul Burnett, DLT and Peter Powell. At 8 p.m. an hour of comedy with Griff Rhys Jones and Mel Smith chatting and playing their favourite records in Not the Nuptials. The evening continued with Richard Skinner and John Peel.
Radio 2 opened at 5 a.m. with Steve Jones on The Early Show followed by Wogan. The normal schedule would’ve been Jimmy Young at 10 and John Dunn at noon but they got the day off. Ed Stewart followed at 2 p.m. including Racing from Goodwood. The rest of day ran as follows: David Hamilton, David Symonds with Much More Music, Listen to the Band, Alan Dell with Dance Band Days, Among Your Souvenirs with Alan Keith, Stop the World (a comedy hosted by Francis Matthews), Hubert Gregg, Brain Matthew with Round Midnight, Truckers’ Hour with Sheila Tracy and You and the Night and the Music with Patrick Lunt.
Radio 4 started the day with Today – John Timpson and Libby Purves out and about in London and Brain Redhead in the studio. After the wedding coverage Robin Day presented The World at One thereafter the network ran a normal schedule – The Archers, Afternoon Theatre, Story Time, PM, Checkpoint, Kaleidoscope, The World Tonight and The Book at Bedtime. At 11.15 p.m. Richard Burton returned to reflect on the royal event in A Day to Remember.
Radio 3 didn’t ignore events and chose to broadcast the Bavarian Royal Wedding of 1568 in three chunks throughout the day. The marriage of Duke Wilhelm of Bavaria and Princess Renee of Lorraine was a grand event that went on for about two weeks. The music was by Orlando di Lassus and the event chronicled by Massimo Troiano. The narration for the programme was provided by Leo McKern and Cyril Shaps. At 7.30 p.m. there was also a Royal Wedding Promenade Concert with music by Stravinsky and Mendelssohn’s Incidental Music to A Midsummer Night’s Dream with its now familiar Wedding March. This piece is also played today on Radio 3 by the Ulster Orchestra, seemingly the only constant with the radio schedule of 30 years ago.

I remember my family been invited next door to watch Charles and Di's wedding in Colour as we only had a small Black and white Portable at the time!

The broadcast on Radio 3 was terrific. I was house decorating at the time with no TV and just an FM radio. The pattern was listen to Radio 3, particularly the McKern / Shaps dialogues and then flip across (briefly) to Radio 4 during one of the musical breaks, typically Lassus as I recall, for a quick progress update then back to Radio 3 for quality coverage.