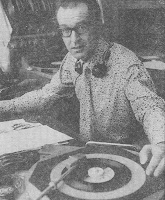 Jon was one of the team of Radio 3 continuity announcers in the 1970s and 80s but had been with the BBC since 1959 working mainly on the Light Programme. If you catch any repeats of the comedy shows The Men from the Ministry or Whack-O, chances are its Jon’s voice you’ll hear doing the opening and closing announcements.

But it’s a connection with John Peel that has given rise to an interest in Jon’s career. As the Peel Wiki site explains Curle “became presenter of the second half of the Wednesday Night Ride in 1968, immediately following Peel's midnight to 1 a.m. programme, and showed himself to be more sympathetic than any of his Radio Two colleagues to what was a radical departure from the regular BBC late-night easy-listening format. He allowed Peel's show to influence his own choice of material and sometimes played session tracks when Peel did not have enough time for them in the first hour of the Wednesday Night Ride”.

This arrangement was short-lived as by April 1969 Jon Curle was hosting the full two hours of Night Ride, then still classed as a Radio 1 programme. A year later it was billed as a Radio 2 show, again transmitted on both networks. The Radio Times of 25 March 1971 carried an article on Jon titled Curle up and relax.


Time was when Jon Curle’s main function of the week was to fill in the hole left by John Pell in the early hours of every Thursday morning, right after Peel’s Night Ride had been faded out to make way for the one o’clock news. At first Curle had been apprehensive about stepping in; he felt he had very little in common with peel and that the continuity they were working for would be lost.

Of course, he was wrong. They met, liked each other and, within weeks, the change-over halfway through Night Ride became keenly anticipated.

Now, Jon Curle has the whole of Wednesday’s Night Ride (12.5 Radio 1 & 2) to himself and says it’s most definitely the highlight of his week, even though it often means leaving Broadcasting House as 2.30 in the morning only to be back again by nine next day. “I sleep in a little cell across the road.”

He started off as an actor (“repertory, a few television plays, nothing startling”) and has been a staff announcer with the BBC for about 12 years. He’s in his middle forties, an immaculate dresser with an easy, sophisticated style; musically his tastes range through Beethoven, Mozart and the Mothers of Invention to Simon and Garfunkel and Peggy Lee. He’s a film fanatic – though cineaste is how he’d prefer to put it – and spends most of his off-duty hours at the pictures or weeding the garden as his Blackheath home.

Wednesday nights have become a bit of an occasion; the studio lights are dimmed, the curtains are drawn and wine and cigars are there to be shared by whoever drops in. All very relaxed, just how it sounds.

Here’s a clip of John Peel’s show from 28 May 1969 with Jon Curle popping into the studio to plug his show.
 

I’ve posted these clips before but this is Jon in action in The Men from the Ministry, opening up Radio 3 and helping listeners through the 1978 wavelength changes.
 

Jon grew up in Gravesend, Kent. After his two year’s National Service his parents decided he should take up a career in teaching. “I dropped out of school to join the local repertory company at £1 per week. Acting, scene painting, prompting, handling light cues, often wrongly. One actress in a production reached out to switch on a standard lamp and I plunged the stage into gloom”. Other early jobs were as a waiter and a packer for a book club.  Jon’s first broadcast, whilst as a drama student, was in an Arthur Swinson feature on the Northern Home Service.

His announcing career started in 1959 when Peter Fettes, the BBC’s Head of Staff Training, had the idea of inviting a handful of radio actors to train as summer relief announcers. During the 1960s Jon was a newsreader and continuity announcer across all the networks and was regularly heard on many Light Programme music shows including Morning Music, Breakfast Special, Friday Night is Music Night, Music Before Midnight, It’s One O’Clock and Playtime.  Come 1967 he was one of the hosts of Night Ride. By 1972 he’d joined the Radio 3 announcing team where he remained for the next two decades.

This is one of Jon's favourite pieces of music - Bizet's Symphony in C - whenever Radio 3's programmes had an underrun this is one of the tracks that he used to reach for.

Colleagues described him as “a very dear man… the consummate professional announcer” and as a “wonderful erudite gentleman”.

With thanks to Sheila Tracy (Who's Who in Radio), Kat's Karavan and Susan Weir

Since I wrote this post I’ve heard from a couple of broadcasters that knew Jon. Simon Bates tweeted me saying that Jon was “a kind and generous man”. Tony Barnfield contacted me by email and also told me that “Jon Curle was a very generous man”. He went on to say that he first met him and Peel (as Jon generally referred to him) “in the late 60's. Jon used to donate duplicate demo discs (and some things he did not like) to aspiring djs like me and Colin Berry, remember him giving me an as yet unknown disc called ‘Both Sides Now’ by Joni Mitchell around then. He really was great friends with the whole Peel family, right up till recent times, and lived close to Ray and Alma Moore in Blackheath. On one occasion, I went on holiday with Jon to USA - we did Los Angeles, San Francisco, New Orleans, Washington DC and New York in, I think, under 2 weeks. He was great company and loved being what he saw as a slightly old-school professional announcer keeping up with the times: he liked Peter Jefferson's style over what he saw as too relaxed a style from newcomers to Radio 4. His older Radio 3 colleague, another lovely man and real gentleman, Robin Holmes was famously quoted once in the 70's asking why Radio 4 appeared to be taking on ‘shop girls’ as announcers.

Thanks to Tony for allowing me publish his comments.

The no.5 on Billboard at the time of the Nightride clip by the way, was 'Oh Happy Day' by the Edwin Hawkins Singers.

If you go to You Tube and type Colin Scot guest of John Curles Night ride there are at least 4 fairly lengthy audio clips with john. hosting Colin Scot over a number of weeks.