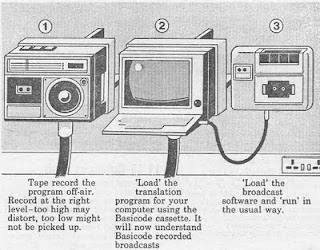 Do you fancy some free software? In Basicode?

Back in 1984 Barry Norman presented a Radio 4 series on the world of computers and technology called The Chip Shop. Why Barry Norman? The reason, he told the Radio Times, was “I discovered that they wanted me to do it because I’m an ordinary kind of bloke who feels he ought to know more about computers.”

The programme also offered a takeaway service on VHF four nights a week at 00:33 whilst the shipping forecast was going out on long wave. “They’ll sound like a series of harsh beeps”, said the RT, “but after they’ve been taped and fed into computers they’ll turn into games and informational software”.

Here’s a programme from the early hours of 22 January 1984. Apologies for the recording quality, it sounds like someone is frying chips in the background. Tape recorders at the ready!

Get your BBC B micro's at the ready...

Can you imagine getting your Microsoft Updates in this way... actually it might reduce the burden on the internet!