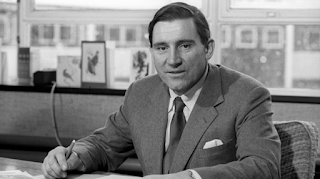 The former BBC Director-General Alasdair Milne has died this week. The circumstances surrounding his departure from the Corporation in 1987 somewhat overshadowed his achievements as an television executive and D-G.


Milne joined the BBC in 1955 as part of the general trainee intake scheme. He was soon attached to the BBCtv interview programme Highlight, a forerunner to the hugely successful Tonight.  The Scot found himself working alongside the fiery Welshman Donald Baverstock, they were to become “the closet of friends and to form a remarkable working combination”. Grace Wyndham Goldie, then Assistant Head of Talks, recalled that “Alasdair was the totally controlled intellectual, but never withdrawn.” Two years later Baverstock and Milne would go on to create Tonight, the programme that changed the face of TV interviewing and film reporting.


Apart from a brief absence in the mid-60s, working on This Week for Rediffusion, Milne was a BBC-man and achieved the top post in 1982. A series of tussles with Thatcher’s government and the Board of Directors, the last being the decision on showing the series The Secret Society led to his resignation.


In 1988 Alasdair Milne talked to Frank Gillard about the rows that embroiled his time as Director-General. This programme was broadcast on Radio 4 on 10 May 1988.