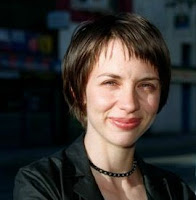 ITV had FM with Chris O'Dowd, about, well, a radio station. Aired back in 2009, I think. Ran for six episodes and featured a bunch of cameos from DJs and musicians alike.

How could you forget "I'm Alan Partridge"?

I was a facilities driver on Thin Air Mostly filmed on the Isle of Dogs.
You wouldn't recognise the area now.

I wish this would resurface. I'd totally forgotten about it til they showed a brief clip on the Antonia Bird documentary on BBC4 last night. If anyone does have it, I would love a copy!

I loved this when it came out, I thought Kate Hardie was brilliant and the music rocked. I had the last episode on tape and audio tape but can no longer locate either. I'd love to see this again.

One of TVS's first programmes, in 1982, was 'Radio', set in a fictional ILR station called 'Radio Phoenix'. It ran, for 2 series, both in the same year, I think. Among the impressive acting ensemble were; Philip Jackson, Dudley Sutton, Sherrie Hewson, Clarke Peters and Gwyneth Strong. Plus, I'm told tat Dawn French and Jennifer Saunders, were among the writers. This was not networked, but was shown, regionally, across the ITV network.