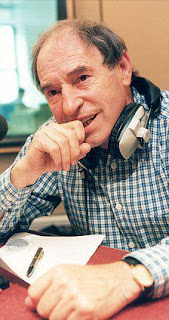 The transition from sportsman or sportswoman to broadcaster is increasingly common – Lineker, Barker, McEnroe, Edwards, Cram etc etc-but probably the first, and certainly the best, was Cliff Morgan.


Cliff Morgan was born and brought up in Trebanog in the Rhondda Valley. Not untypically he attended chapel, sang in the choir and played rugby, though his first passion had been cricket and then football. A scholarship led him to the local grammar school where the wonderfully named games master Ned Gribble “did more than anyone else to shape my future in rugby”.  With Grib’s encouragement he went on to join Cardiff where, in 1951, he achieved his first cap for his country when selected to play against Ireland at the Arms Park.  “Morgan the Magnificent” would go on to captain his country and was by common consent “the best fly-half there can ever have been, thrusting, darting, always unexpected”.


From an early age Cliff had an appreciation of voices and music that would infuse his later broadcasting. “Ever since I was a child, he wrote in his autobiography, “and heard the Light Programme and the Welsh Home Service brought home to us by the relay shed in the village, I have been fascinated by the wireless”. So it perhaps no surprise that he clearly recalled his first broadcast as a player when interviewed for Sports Report – years before coming a contributor to the programme.

It all started for me at 5.35 p.m. on Saturday 8 March 1952 in Dublin. Wales had beaten Ireland to win the Triple Crown and the BBC commentator Sammy Walker … came to ask if I could spare the time to be interviewed by Eamonn Andrews. Little did he know I would have given my Welsh jersey to speak to Eamonn. That interview I remember clearly. Having asked me about the run of play and my opinion of the legendary Irishman Jackie Lyle, Eamonn asked what I would remember most about that afternoon. ‘My father losing his teeth’, I said, ‘and he wasn’t even playing!’ What actually happened was this. When Ken Jones ran 50 yards at Olympic speed to score a try, my father leapt to his feet and shouted with joy, but he spat his top set ten or 12 rows in front of him. He never got them back!

Occasional broadcasts followed such as a conversation piece with Welsh rugby commentator G.V. Wynne-Jones for Sports Parade in 1955. Later that day he recalled watching J.L. Manning and John Arlott in the Sports Report studio. “Playing rugby was one thing, but mixing with all these people you’d read or heard about or listened to on the wireless, that was thrilling in another way”.

It was a chance meeting with BBC Wales boss Hywel Davies on the night of his last international, during a 1958 tour with the Barbarians, that led to Cliff’s pretty much immediate progression from rugby player to broadcaster.  Davies’s offer was “ten weeks next Monday night, we’ll be doing the first sports programme on television from Wales. I want you to introduce it, and produce it. Can you do it?” Even though he’d seen very little television he accepted the deal and was soon the front man for Welsh Sports Parade.


This opened up doors for Cliff who during his time in Cardiff also presented Songs of Praise when it rolled into town and a four-part series People Who Sing. He had his first regular radio work too with a Saturday night sports programme Going Round the World and, alongside the legendary Alun Williams (“it’s not Alan, it’s Alun; it rhymes with gin and sin”) the quiz Make Your Mark.

One morning Hywel Davies sent for Cliff and offered him some career advice: “I want you to go to London, there’s a job going now on Grandstand. You must get that job, by any means you can, and work for Paul Fox for three years. Then you are to leave Sport and go and work for Grace Wyndham Goldie in Current Affairs for three years. Then, after sixish years in London, which will coincide with my being appointed Controller of BBC Wales, I want you to come back here as the Head of Programmes”.  Well, he was nearly right!

Cliff went to London in 1963 but not to work for Paul Fox but to replace him as editor of Grandstand.  In fact Cliff had already done a single stint on Grandstand when, some time before, he’d been summoned to London to cover for an ailing Alan Weeks. It wasn’t long before he was also offered the editorship of the midweek Sportsview with the promise of an extra £2000 “which I never got”.  As for current affairs, well the job was not with the BBC but at Rediffusion as editor of This Week where he stayed for two and a half years.  Meanwhile Hywel had died in 1966 at the tragically early age of 49 so he never did take up the promised management post in Wales.


Instead Cliff was now back as a freelance hopping between television, radio and newspaper columns. On BBC2 he was the host and match commentator for Rugby Special between 1967 and 1973. Arguably Cliff’s greatest commentary was the Barbarians v New Zealand match in 1973 but here’s Cliff in 1971 talking about the Lions Tour of New Zealand.

Other TV work included a Sunday teatime series Hobbyhorse (1968-70) in which children “came to the studio to demonstrate their unusual and sometime strange hobbies” and for Rediffusion the children’s show Come Here Often, co-presenting with Sarah Ward. And, of course, he was the opposing team captain to Our ‘Enry on the first few series of A Question of Sport back in the days when they really had questions about sport. 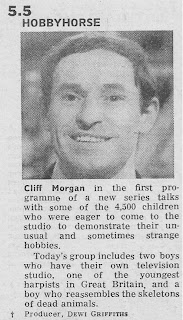 On the radio Cliff was sometimes working for Today and was one of the hosts of BFBS’s London Sportsdesk.  He was also playing ‘Morgan the DJ’ with a Saturday evening classical music selection of These You Have Loved on Radio 4 (and not Radio 2, does someone want to edit Wiki?) and on the rota of presenters of Radio 2’s After Seven.  Unfortunately Cliff’s time on These You Have Loved was cut short by a stroke in early 1972 from which he temporarily lost his speech (Richard Baker took over and remained with the programme for many years) and he wasn’t back to full fitness until the end of the year.


Early in 1973 Cliff got a call from Angus McKay, the man responsible for getting Sports Report off the ground and steering its first 20-odd years, offering him a staff job as radio’s Editor of Sport alongside Bob Burrows.  He began to re-shape Sport on 2, getting it out of the studio and live from Wembley, Wimbledon or wherever. Within twelve months he was also head of radio Outside Broadcasts (taking over from Robert Hudson) which was a tremendous help in getting the two units to work together. Cliff recalled that Sports News and OBs lived on opposite sides of the same corridor but “hadn’t talked for ten years”.


It was back to the telly in 1976 as Head of Outside Broadcasts, a position he held until 1987 and so covering a period of rapid technological change and increased coverage of major sporting occasions plus the occasional royal wedding. He didn’t desert radio completely though: he was back as DJ in 1978/9 on Radio Wales’s Sunday lunchtime Sounds Unforgettable. 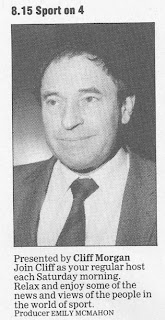 Sport on 4 remains fondly remembered. It had started in 1977 with former Test cricketer Tony Lewis. He left in early 1986 and, after a succession of broadcasters, Cliff stepped in from November. His passion for sport and his passion for words were evident.  If Sport on 2 was the back pages, Sport on 4 was the comments column and the star interview.  If was popular with sports fans and non-sports fan alike.


From 3 January 1987 here’s the part of the programme with Cliff interviewing cricket broadcaster and journalist E.W. Swanton.

Onto 4 July 1987 with this almost complete recording that includes interviews with Billie Jean King, Ray Illingworth and Stan Smith.

A deluge of complaints came in when Cliff and the programme were dropped from the schedules in April 1998 as part of the incoming controller’s new broom – the time slot went to John Peel’s Home Truths. Radio Times reader Ann Williams wrote: “I have long enjoyed Sport on 4 despite not the slightest interest in sport.  The superb interviewing set it apart; Cliff Morgan’s interviewees, whether hardened football managers or novice rowers and throwers, were as relaxed and natural as if they were talking privately to their best friend”.


Following the axing RT columnist Roland White reflected that “Cliff Morgan’s public reaction to the news that Sport on 4 was being scrapped was that it was probably about time, all things considered. His judgement on his own performance was just as modest: he probably wasn’t as clever as some of the younger presenters, he said, but there was a place for somebody like him in the schedules.


He was being too modest. If I were the smartest young smart aleck in sports broadcasting I would still envy Cliff Morgan. His distinctive voice gives him an advantage as a broadcaster”.


Nine years ago Cliff moved to the Isle of Wight with his second wife. Latterly cancer of the vocal chords robbed him of that wonderful lilting voice. He died last Thursday.


Sport on 4 first aired on Saturday 30 April 1977 with Tony Lewis presenting. It was one of the programmes brought in to replace Saturday Briefing.  When Tony left in 1986 there were a number of temporary hosts including Harry Carpenter, Tony Adamson and David Coleman. Cliff’s first show was on 22 November 1986 (again Wiki needs editing here).


The final edition of the programme was on Saturday 4 April 1998. The replacement sports programme on the network was scheduled for late Friday night – Late Tackle with Martin Bashir, who is, of course, best remembered for a certain royal interview.
Posted by Andy Walmsley at 08:46