The Bradshaw of Broadcasting

“We will now give you The Radio Times. The good new times. The Bradshaw of Broadcasting. May you never be late for your favourite wave-train. Speed 186,000 miles per second; five-hour non-stops. Family season ticket: First Class, 10s. per year”.


This somewhat forced analogy was the introduction to the first edition of The Radio Times (“The Official Organ of the BBC”) of 28 September 1923. Published “Every Friday”, price “Two Pence”. The words those of Director of Programmes at the British Broadcasting Company, Arthur Burrows.

Volume 1 Number 1 was filled with articles and plenty of adverts for radio receivers, valves, batteries and headphones, all the paraphernalia required to listen to one of the regional services emanating from London, Birmingham, Manchester, Cardiff, Newcastle and Glasgow.


Listings for the “Wireless Programme” started with those for Sunday, an RT tradition that would endure for the next 40 years. In true Reithian style it was dour mix of organ recitals, the Band of His Majesty’s Royal Air Force and a religious address. 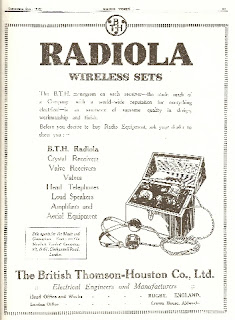 The service from London had the longest broadcast hours with some morning programmes. For Monday 1 October you had the delights of a concert featuring tenor Wilfred Lynn between 11.30 a.m. and 12.30. Back at 5.00 p.m. for Woman’s Hour – confusingly on air for just 30 minutes with “Society Gossip” and “Mrs C.S. Peel’s Kitchen Conversation”. Other regions offered something similar under the titles Ladies Corner, A Talk to Women or, from Manchester, Mainly Feminine.


At 5.30 p.m. there were two Childern’s Stories with Helen Bannerman’s Little Black Sambo and part of Herbert Strang’s Jack Handy. Together with a 15-minute Boy’s Brigade and Boy’s Life Brigade Bulletin these made up the famous Children’s Hour hosted by one of the radio Uncles or Aunts.


After an interval programmes resumed at 7 p.m. with a news bulletin and Weekly Book Talk with Mr John Strachey. A Symphony Concert (Weber, Elgar, Saint-Saens and Dvorak) followed at 7.30 p.m. featuring an Augmented Orchestra under the baton of Mr Percy Pitt. Another talk, this time from Maj-Gen Sir William Sefton Brackner, was at 9.15 p.m. on the no doubt fascinating subject of “The Possibilities of Low-Powered Aeroplanes”. Finally there was another news bulletin and then violin music played by Miss Daisy Kennedy before it all closed down at 10.30 p.m.


One feature of the Radio Times that has remained constant is Letters to the Editor, or Letters From “Listeners” as the first edition had it. (Variously since then the section has been Points from the Post, You Write and these days Feedback).


In the first issue one correspondent, signing himself simply as “P.J.” from Birmingham wrote about a perennial problem for the BBC as to just how populist the programmes should be:


Frankly, it seems to me that the BBC are mainly catering for the “listeners” who own expensive sets and pretend to appreciate and understand only highbrow music and educational “sob stuff.” Surely, like a theatre manager, they must put up programmes which will appeal to the majority, and must remember that it is the latter who provide the main bulk of their income.

This and many other letters are plundered in this programme broadcast in 1997 to celebrate the BBC’s 75th anniversary. From the Editor’s Postbag is presented by Barry Took and was transmitted on Radio 2 on 23 November 1997.  Guests are former Editor Russell Twisk, the then Editor Sue Robinson and Radio 4 announcer Peter Donaldson.


Over the years the Radio Times has itself being featured on the cover. These are just a selection from the RRJ archives:

I am truly inspired by this online journal! Extremely clear clarification of issues is given and it is open to every living soul. I have perused your post, truly you have given this extraordinary informative data about it.
Fax broadcast

This design is wicked! You obviously know how to keep a reader amused. Between your wit and your videos, I was almost moved to start my own blog (well, almost...HaHa!) Excellent job. I really enjoyed what you had to say, and more than that, how you presented it. Too cool! fax broadcast

Thanks for sharing this mate! I am not living in London, I am wondering how entertaining these programs are. sounds they are interesting. I am also wondering, during these times, does online faxing exist? Aren't these classic covers sent via online fax?