It’s back to 1986 for this dip into the Christmas Day archives, the first in a short series of seasonal posts.


Flicking through the Christmas edition of the Radio Times - no special artwork on the cover just an EastEnders, it was the year of that Den and Angie episode –  BBC radio offered very traditional fare, with the highlight of the day being a 30 year-old repeat.


On Radio 1 there was a throwback to the days when Leslie Crowther and Ed Stewart used to trek round children’s wards with Peter Powell, Janice Long and Simon Mayo broadcasting from hospitals around the UK. It was pretty much a first team line-up during the day with Bates, Read, Mayo, and Brookes with the day rounding off with P and V’s Christmas Party (The Ranking Miss P and Robbie Vincent). 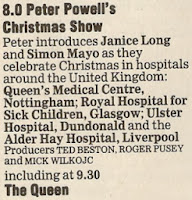 Radio 2’s morning included Roger Royle with Good Morning, Christmas and Ken Bruce. There was comedy of the end-of the-pier variety with The Christmas Huddlines and Ken Dodd’s Christmas Cracker. Terry Wogan may have been in his BBC1 chat show period but didn’t entirely abandon radio as he popped up between 1 and 3 p.m. You’ll have nodded off post-lunch with this line-up: In with the Old! (a musical comedy starring Evelyn Laye, Elisabeth Welch, Dora Bryan, Maxine Audley and Richard Murdoch), Gerald Harper as DJ in My Favourite Things, Sing Something Seasonal and A Celebration of Christmas with Roy Castle, Cliff Richard, Dana, Mary O’Hara and Alvin Stardust. 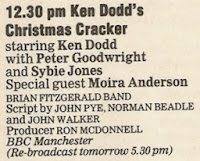 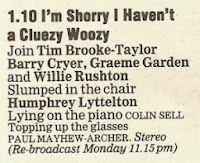 Radio 4 was living in the past that year. In the morning we had the Vintage Archers with the Archer family sharing memories and events from the last 35 years.  That 30 year old highlight was The Goon Show edition Operation Christmas Duff, originally broadcast on the General Overseas Service in 1956 but never heard on domestic radio until 1986. There was a 27-year old repeat in the evening with the start of a re-run of Paul Temple and the Conrad Case.  In fact there was a whole stack of drama to enjoy: part one of John Tydeman’s adaptation of Emma, Rattigan’s French Without Tears, Murder for Christmas was The Nine Tailors starring Gary Bond as gentleman sleuth Lord Peter Wimsey and a binaural production of Jenny Hursell’s A Winter’s Tale.


Tucked away at 23.30 was Project Santa Claus, an early Punt and Dennis collaboration with Steve providing the script and Hugh doing some of the voices. In fact it was almost a Week Ending spin-off. At the time Steve was writing for the programme, added to which Ending regulars David Tate and Sally Grace (she gets to do her Thatcher impersonation) were in the cast and David Tyler was the producer. You’ll recognise some of the musical cues too.

This won't be in your issue, but BBC Radio London had something similarly nostalgic - a programme about the "round the Empire" link-up which used to be broadcast, latterly simulcast on the Home Service & Light Programme, before the Queen every Christmas afternoon, the last one being in 1957.

The Dad's Army 'Broadcast to the Empire' - an insert to the 1972 Christmas Night with the Stars - was based around one of these, although the extended radio episode made out of it, 'Ten Seconds from Now', wasn't.