Take That and Party 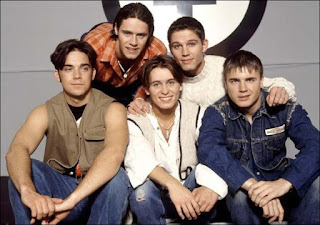 Was there too much Gary Barlow on the radio this month? Well I’m afraid I’m adding some more with this show featuring the Take That boys, in the days when they were boys.


Their longevity cannot be disputed. Indeed as I write this Gary’s album is at number three in the charts and Robbie tops it with Swings Both Ways. You may have also caught him recently on Radio 4’s Mastertapes series.
When The Take That Christmas Take Away aired on Radio 1 on Christmas Day 1993 the band were at the height of their fame, first time round, and there’s plenty of joshing and good-natured banter. I know this programme is unlikely to appeal to my core readership but for fans of 90s pop here’s a rare chance to hear Take That as DJs for the day, complete with Smashie and Nicey-like impressions.


As for the rest of the Christmas Day on Radio 1 you could hear Neale James from 4 a.m. followed by Lynn Parsons and Simon Mayo. After Take That there was Johnnie Walker and, who’d have believed it, some religious programming with God in the Flesh featuring the Late Late Service and a Whitney Houston gospel special presented by Simon Bates. The day rounded off with Peel’s Festive 50.
On Radio 2 the line-up was Colin Berry, Roger Royle (of course), Don Maclean, Ken Bruce, Michael Aspel, The News Huddlines and Chas and Dave’s Christmas Knees Up.  You could also catch Alan Titchmarsh, David Jacobs, David Mellor (!) and Gloria Gaynor.


Radio 3’s main offering was a broadcast of The Barber of Seville live from the Met in New York.

Unlike other Radio 4 Christmas Day schedules that I’ve written about this year, 1993 actually has a day that isn’t packed with repeats. After the 7 a.m. news John Walter’s Xmas Fayre gave listeners two hours of ”mystery time zone guests, some literary consequences and radio’s first ever crossword of the air”, all live apparently.  It Was Christmas Day in the Empire recalled those festive radio relays across the nation and from far-flung places around the world that used to go out on Christmas Day in the 40s and 50s. Pick of the Week That Wasn’t had Father Christmas looking back at seasonal broadcasts “that might have been”. Comedy came in the shape of I’m Sorry I Haven’t a Clue, News Quiz of the Year, The Discreet Charm of the BBC and The Masterson Inheritance with Comedy Store alumni Paul Merton, Josie Lawrence, Jim Sweeney and Lee Simpson. The dramas were a new production of a Ben Travers farce, Turkey Time, and a repeat of The Taming of the Shrew starring Bob Peck and Cheryl Campbell.

Finally on Radio 5 Cliff Morgan had an early morning seasonal miscellany of music, humour and verse whilst in the evening there was a serving of Cult Radio’s Christmas Extravaganza with Marc Riley and Mark Radcliffe.
Posted by Andy Walmsley at 08:00

The original Radio 5 was on borrowed time by this point, of course.