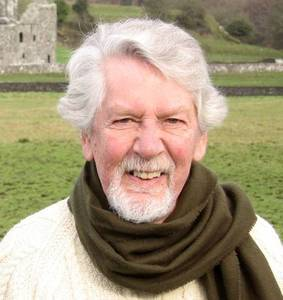 Paddy O’Byrne was a “giant of South African radio”, one of the best-known and much-loved broadcasters in the country over four decades.  Not bad for a lad from Dublin who only went to South Africa when he was posted there by his insurance company employer.


When I first wrote about Paddy for my post on Radio 2 newsreaders I only knew a little about his time in South Africa. Earlier this month I was contacted by Jean Collen who told me that Paddy had just passed away and this news set me off to uncover more about the man once described as “the best known Irishman in South Africa”.
Paddy was born in Killiney in County Dublin in 1929 and educated at St Mary’s College, Castleknock College, where he won prizes in English and was active in the performing arts, and University College Dublin.  He, somewhat reluctantly, followed his father – Supreme Court Judge John O’Byrne - into law, being called to the bar in 1952. But his main love was the world of entertainment and he gave up law after a couple of years and left for London, joining the George Mitchell Singers (he was considered to have a “first rate bass” voice).


On tour in Llandudno he met his wife-to-be, Dublin-born singer and dancer Victoria Fitzpatrick, his beloved “Old Vic”. They married in 1956 and Paddy obtained a steady job working for an insurance company. Within a couple of years they had posted him to South Africa. But like the law, insurance wasn’t really for him either and in 1961 he took part in the Voice of South Africa competition organised by the South Africa Broadcasting Corporation, which he won. Part of the first prize was to read a serial on the English service of the SABC. Thus his course was set for a career in broadcasting.
Paddy’s work for SABC was extremely varied on both the English language public service and the commercial Springbok Radio as an announcer, newsreader, presenter and quiz-master. For a while he played Mark Saxon in the adventure serial No Place to Hide. Other shows for which he was remembered are Sunday at Home, Twenty One, Quiz Kids and Deadline Thursday Night.
Springbok Radio Revisited posted this short tribute to Paddy:

In the early 1970s Paddy returned to the UK (for reasons I’m unable to establish) and in 1974 was employed by Capital Radio as one of the presenters of Night Flight and as the voice of Capital Jobspot. Those overnight shows proved far from satisfying as a lack of needletime meant the playlist consisted wholly of library music. By 1976 he was now at BBC Radio 2 as an announcer and newsreader. This role also gave him presenting opportunities on shows such as Music from the Movies, the Northern Radio Orchestra shows, Marching and Waltzing, You and the Night and the Music and, between March 1979 and January 1980, Saturday’s Early Show.
From my own collection of recordings here’s Paddy on Capital and Radio 2:
 


In 1980 Paddy was back in South Africa for a second time, initially helping to launch Channel 702 (now known as Talk Radio 702) and then returning to SABC with his daily Top of the Morning with Paddy O’Byrne. It was known that during the latter years of his imprisonment Nelson Mandela was a regular listener to Paddy’s shows. The O’Byrne’s got to meet him at a Gala Banquet and subsequently Mandela’s daughter Zindzi became a family friend. There was a sad irony that Paddy and Nelson Mandela both died within a day of each other. 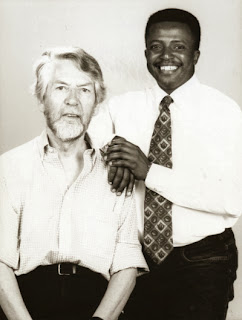 In 1995 Paddy mentored a young broadcaster, Vuyo Mbuli, and for a while they co-hosted an afternoon show on the renamed English service, SAfm. Mbuli (pictured left with Paddy) went on to become a household name in South Africa but tragically collapsed and died shortly after his 46th birthday in May of this year.


By 1996 Paddy had retired from SABC but continued to broadcast on the community station 1485 Radio Today, at the request of station chairman and former Springbok Radio presenter Peter Lotis, as well as Radio Veritas in Johannesburg and Fine Music Radio in Cape Town.
The O’Byrne family returned to Ireland, to Mullingar in County Westmeath, in 2001. For a while Paddy was still doing the occasional show on the classical station Lyric FM and some recorded shows for Fine Music Radio back in South Africa.  In 2010 he was inducted into the MTN Radio Awards Hall of Fame with the citation on the website reading: “Another giant of South African Radio, and an accomplished newsreader and presenter.  After a long stint at the SABC, he was also one of the founding voices of 702 before settling in Ireland”.


In January of this year Paddy’s wife died and he made a brief return to South Africa for a memorial service in honour of the “Old Vic”. During the visit he made a couple of guest appearances on the radio, on 1485 Radio Today and on Classic FM’s People of Note, reminiscing with Richard Cock. Here’s an edited version of that conversation.


Not long after his wife’s death Paddy was diagnosed with lung cancer. Though the treatment was successful he died of heart failure on 4 December. His death was widely reported in the media in both South Africa and Ireland. His friend and former writer and co-star on No Place to Hide, Adrian Steed remembered him as “a wonderful man in very many ways. The measure of the man was his humanity, his generosity, and his warmth to the many friends he made via radio”.


Thanks to Jean Collen. The 702 Launch Audio comes from Primedia Broadcasting and People of Note from Capital FM 102.7
Posted by Andy Walmsley at 10:00

I enjoyed Paddy's Saturday early show for radio 2 very much. His catchy theme tune struck just the right note.So sorry to hear of his passing.