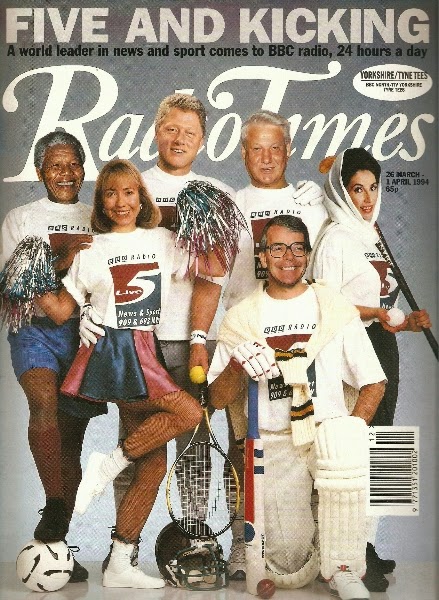 BBC Radio 5 Live celebrates twenty years on air this week with the return of Jane Garvey, who launched the station on 28 March 1994, and a week of ‘presenter swaps’ for Peter Allen who was also there at the start.


The station focussed on news and sport 24-hours a day; the comedy, music, education and children’s shows of the old Radio 5 were cast to the four winds.
Digging out the Radio Times for that week here’s the schedule for day one:

Opening proceedings at 5 a.m. was Jane Garvey with Morning Reports, the programme remains a 5 Live fixture to this day.
Looking after The Breakfast Programme was 5 Live’s kingpin Peter Allen, one of only three voices heard that day that have lasted the full twenty years.


Poached from Today was Diana Madill to present The Magazine from 8.35 a.m. to midday.  As well as a phone-in there were daily features on the environment, health, conservation, science and film and video reviews.
Rising star Eddie Mair presented the two-hour Midday with Mair, at the time still presenting Radio 4’s Saturday morning travel show Breakaway. Mair’s  show included a daily Moneycheck with Liz Barclay, later of You and Yours.


From Radio 1’s Newsbeat and, at the time the new BBC1 current affairs show Here and Now, came Sybil Ruscoe with Ruscoe on Five between 2 and 4 p.m.
The only daytime presenter to come over from the old Radio 5 was John Inverdale with the imaginatively titled John Inverdale Nationwide.  ‘Invers’ still works for the network, most recently hosting the Cheltenham Festival coverage.


At 7 p.m. each day was News Extra followed most evenings by sports coverage. On the launch day it was Pat Murphy’s series Good for a Quote starting with the career of Tommy Docherty and then Jon Champion with Champion Sport featuring commentary on the Sheffield United/ West Ham match.  In week one there was also Football Plus with Jonathan Legard and Trevor Brooking’s Football Night.   Friday night’s, from week two, saw Parky back on the radio with Parkinson on Sport.
News Talk at 10 p.m. was an hour-long discussion of different aspects of news and current affairs themed each evening. On Monday there was the BBC’s Social Affairs Correspondent Niall Dickson. On Tuesday Paul Reynolds had a kind of From Our Own Correspondent.  Wednesday was Nigel Cassidy on matters financial and Thursday all things political with John Sergeant. Friday nights were a little different with a 30 minute review of the newspaper business, Stop Press, usually presented by John Diamond, followed by Financial Week with Heather Peyton, who had previously worked on Radio 4’s The Financial World Tonight.


Between 11 p.m. and midnight  a round-up of news, sport and business in Night Extra followed by The Other Side of Midnight with Tim Grundy. On other evenings you'd hear After Hours, a live talk show “where nothing is taboo”, though no host is listed, can anyone remember who it was? Meanwhile on Thursday night Stuart Cosgrove’s talk show was Night Moves.
Rounding off the day, between 2 and 5 a.m., another stalwart of the station’s schedules Up All Night with Rhod Sharpe, the third of the voices still on air today. The weekend presenter was former-LBC man Richard Dallyn.


And finally honorary mention must go to Adrian Chiles. He‘d also worked on The Financial World Tonight and joined Radio 5 Live as the business reporter in Wake Up to Money, which then was part of Morning Reports, and so was heard on day one. Of course he went off to do his TV work for the Beeb and ITV but returned to the station last year as co-host Friday’s 5 Live Drive.
Posted by Andy Walmsley at 09:00

One of the presenters of After Hours was Vincent Hanna

As well as Allen, Chiles and Sharpe, Pat Murphy is still on the station twenty years on, reporting on football and cricket with great distinction.