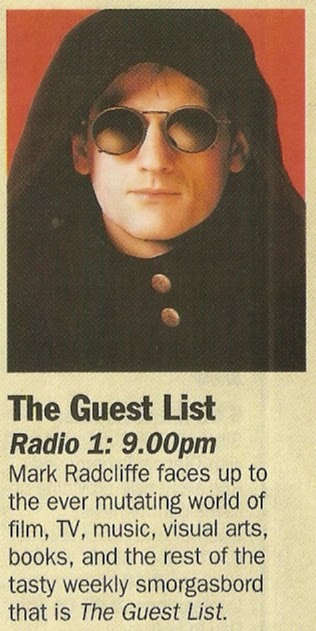 The Guest List was Radio 1’s short-lived arts magazine show airing in 1993 with Mark Radcliffe as “the pathfinder in the cultural desert”. It ran for 28 weeks every Thursday night from 15 April to 21 October.


This edition from 20 May 1993 features a film review with Mark Kermode, Tom McGrath’s new play about boxer Ken Buchanan, talking about TV with Mariella Frostrup and comedy duo Trevor and Simon.


1993 was a significant year for Mark Radcliffe: the Sony Award-winning Out on Blue Six was also running, having started in 1991, there was the sketch show Skyman – “the Surrealchemist of Sound” – the Radio 5 series Cult Radio and then, from 25 October, the start of the Radio 1 late night show nicknamed The Graveyard Shift.


The new show “presented by a bloke who’s older than the last one” replaced the outgoing Nicky Campbell, who temporarily left the station. Here’s the start of the first broadcast with Mark and Lard.


Fast forward eleven years and Mark and Lard were now leaving Radio 1, Radcliffe heading to Radio 2 and Riley to 6 Music. The departure didn’t go unnoticed and the BBC1 North West arts show Powerhouse was there to witness the event. This programme was broadcast on 26 March 2004.