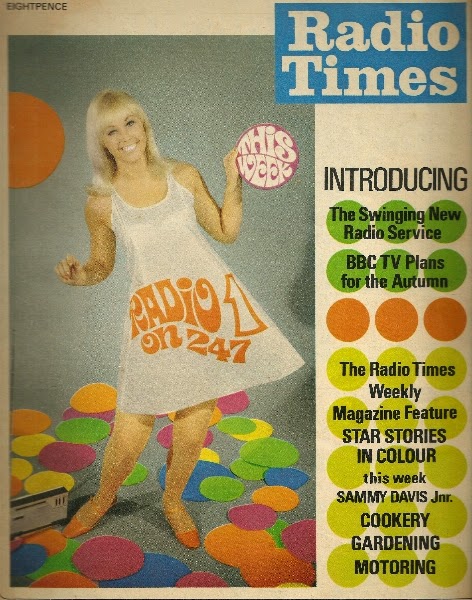 “Standby for switching. Get tuned to Radio 1 or 2. 5, 4, 3, Radio 2, Radio 1, go!” Surely one of the most played pieces of radio archive: Robin Scott’s countdown to the launch of Radio 1 at 7 a.m. on Saturday 30 September 1967.  But what was happening over on Radios 2, 3 and 4? Was there an exciting new range of programmes as part of the biggest shake-up of the radio networks since the immediate post-war period? Or was it just business as usual?


The relabeling of the old Home, Light and Third had been prompted by the BBC’s promise to fund a new pop service to replace the offshore pirate stations. This had first been mooted in 1966 and work started in earnest in January 1967 when, Johnny Beerling recalls, producers in the Popular Music and Gramophone Departments were asked whether they wanted to work on Radio 1 or 2. Beerling would then work alongside Derek Chinnery, Teddy Warwick and Angela Bond in thrashing out ideas for the pop station, reporting to Robin Scott who was appointed controller a month later.
In fact at that time the new station still didn’t have a name, that decision was made later that summer. Amongst the names considered by the BBC’s Sound Broadcasting Committee were “Popular Music Service”, “Radio 247”, “Radio 67” (which would surely be out-of-date come January 1968!), “Radio Elizabeth”, “Radio Skylark”, and “Radio Pam”. By May 1967 the use of numbers was first suggested such as “Radio One” and “Light One”.  The numbering of the networks led Home Service controller Gerald Mansell to express concern that the new Radio Four could “imply demotion”. 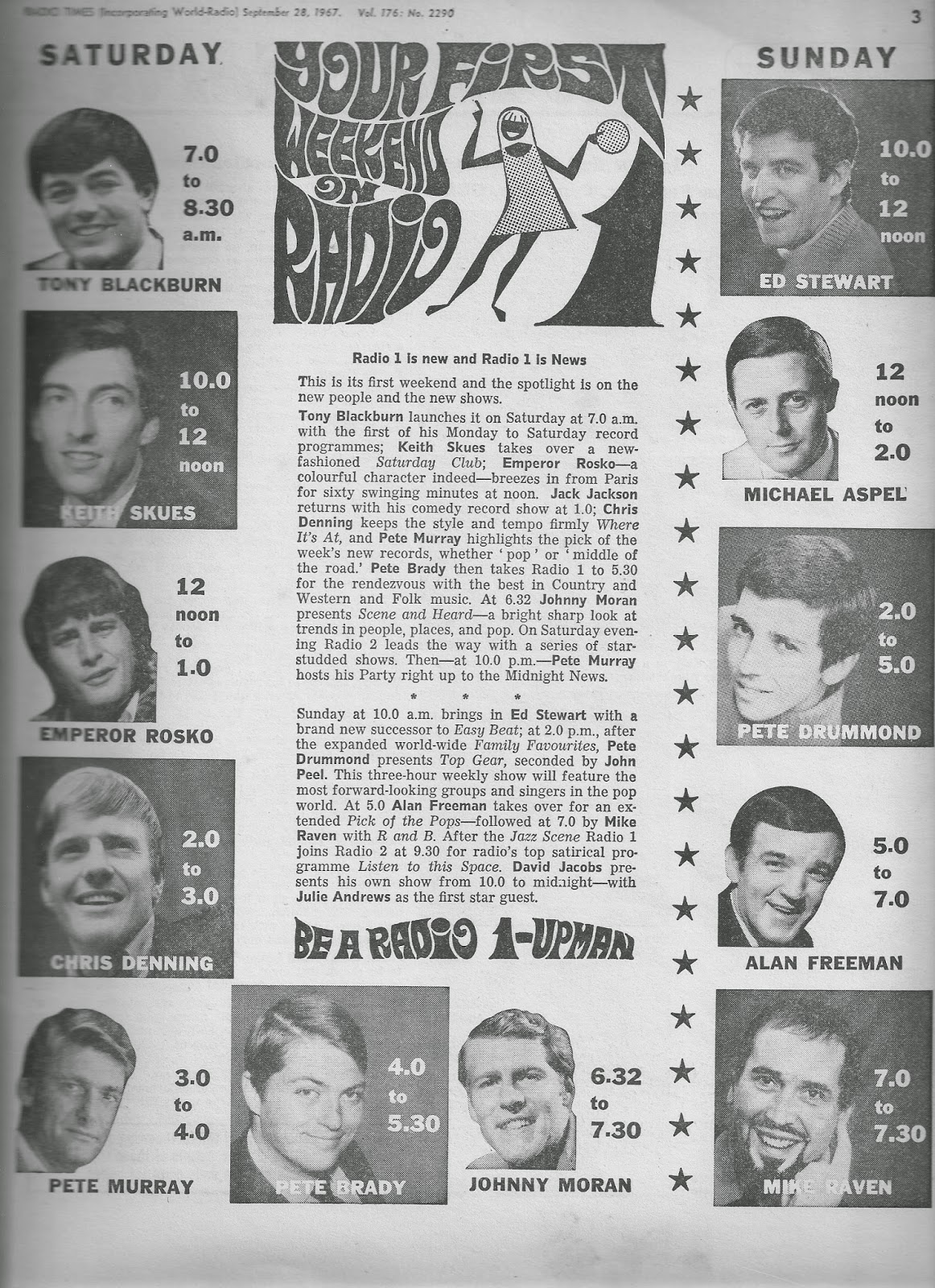 So what about Radio 1? As ever funds were short so to make the new service look like it had a full schedule there was loads of simulcasting with Radio 2. There was also the trick of billing former Light Programme shows as being on Radio 1, even when also going out on Radio 2. Confusing! This happened for Saturday Club (but dropping Brian Matthew in favour of Keith Skues), Family Favourites with Michael Aspel, Country Meets Folk with Wally Whyton and The Jazz Scene with Humphrey Lyttelton. Even that old warhorse Housewives’ Choice became a Radio 1 show re-titled Family Choice. Some Radio 1 shows such as Late Night Extra and Night Ride would later become long-running Radio 2 programmes.
This was the line-up on Radio 1’s launch day:


You’ll find audio of Tony’s first show online so I’ll not post it again here. But imagine the shock of any Light Programme listeners who stumbled across Midday Spin – the previous Saturday it had been a special Holiday Spin with Michael Aspel -  and heard the whoops and shouts from Emperor Rosko. Here’s a scoped version of part of that show:

In 1967 the Light Programme was allowed to stay up late and didn’t close down until 2 a.m. It fell to announcer Roget Moffat to have the last word. He was that night’s presenter of It’s One Clock, a hour-long music show with a different host each weekday – in that final week you’d also have heard Jon Curle, Sean Kelly, Wally Whyton and Adrian Love.
 

In contrast to Radio 1’s full Saturday schedule, Radio 2’s was a little light. It was continuity announcer Paul Hollingdale who was the first voice on the new networks when Radio 2 opened at 0530. He’d been chosen by controller Robin Scott to host that morning’s edition of Breakfast Special in place of the regular Saturday presenter Bruce Wyndham. In fact Bruce was working that morning anyway, but over on Radio 4 reading the early morning news, such was the swapping between networks of continuity announcers at that time. So the timings were:

This is the intro to Spotlight 1 and 2:


In 2007 Paul Hollingdale recalled that first Radio 2 edition of Breakfast Special. And if you want to know the first record played on the station here’s the answer:
 


Listeners to the new Radio 3 will have noticed absolutely no difference to their daily programmes. Saturday under the old regime was broken down into different strands: 0700-1230 Music Programme, 1230-1800 Sports Service and then 1800-2315 Third Programme. This continued on 30 September and remained the general format of the station until April 1970 when it became more of a cohesive network.

Friday 29 September had been The Third Programme’s twenty-first birthday and the whole evening was dedicated to a performance of The Tragedy of King Lear with John Gielgud in the title role. Closing down proceedings after the Market Trends report (an odd piece of scheduling with financial news on the Third whilst over on the Home Service they had a music programme) was announcer Cormac Rigby. He was also on duty the following morning to usher in Radio 3, whose schedule for the day was as follows:

The last programme on the Home Service was Jazz at Night with records played by John Dunn. Jazz at Night became the only show to move from the Home Service to Radio 1, finding a home just after midnight on Friday nights. John Dunn, of course, would then pop up during Saturday reading the news on Radio 1 and 2 and making that now infamous “here is the news, in English” intro to the bulletin during Rosko’s show (see above).

It was David Dunhill who opened up proceedings on Radio 4 the following morning welcoming listeners to “Radio 4, the Home Service”, a billing that remained for many months to ease the transition. The schedule was exactly the same as the previous Saturday with the sole exception of the renaming of Lightening Our Darkness as At the Close of the Day. Reviewing the line-up I’m struck by the sheer volume of, necessarily, short programmes. There must have been nearly fifty continuity junctions. This is the schedule for the London area, there were regional variations in the Midlands, North, Scotland, Wales, Northern Ireland and South & West.
0635 Farming Today
0650 Ten to Seven – prayers and meditation
0655 Weather and Programme News
0700 News
0715 On Your Farm
0745 Today’s Papers
0750 Outlook – a Christian angle on the news
0755 Weather and Programme News
0800 News
0815 From Our Own Correspondent
0845 Today’s Papers
0850 Voices – archive material introduced by Leslie Perowne
0900 News
0915 The Weekly World – a review of the weekly news magazine by Geoffrey Howe
0920 A Choice of Paperbacks chaired by Cliff Michelmore
0945 In Your Garden – introduced by John Hay
1015 Daily Service
1030 Science Survey with a talk on Protection Against Disease
1045 Study Session with programmes on The Artist at Work, Music Questions and Divertissement Francais
1200 Motoring and the Motorist – chaired by Bill Hartley
1225 All the Best from Today – clips from the week’s Today programme linked by Jack de Manio
1255 Weather and Programme News
1300 News
1310 Round the Horne – repeat of an April edition on the Light Programme
1340 Desert Island Discs – Roy Plomley talks to castaway Roy Castle
1415 Afternoon Theatre – with Floral Tribute written by David Bartlett
1515 Home for the Day – a Saturday supplement to Woman’s Hour with Marjorie Anderson
1600 Music at Four – with music by Haydn, Mozart and Stravinsky played by the BBC Welsh Orchestra and a Ravel quartet played by the LaSalle String Quartet
1755 Weather and Programme News
1800 News and Radio Newsreel, followed by Regional News
1830 Sports Session (other regions had their own sports programmes)
1900 Steptoe and Son – a repeat of Crossed Swords from the Light Programme in July
1930 Gala Night at the Opera – Sandra Chalmers introducing a programme of music recorded at the Huddersfield Town Hall played by the BBC Northern Symphony Orchestra and the BBC Northern Singers
2030 Saturday Night Theatre with Paul Daneman and Maragret Rawlings in Adventure Story by Terrence Rattigan
2158 Weather Forecast
2200 News
2210 A Word in Edgeways presented by Brian Redhead
2255 At the Close of the Day – a meditation by Stanley Pritchard
2310 Music at Night – Scarlatti sonatas played by Alan Cuckston
2342 Weather forecast, news summary and coastal waters forecast
2348 Closedown
Posted by Andy Walmsley at 09:00