Questions on a Postcard 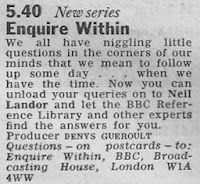 Before they invented the World Wide Web and Google if you had a burning question you wanted answering, such as the origin of the phrase Dutch courage, you’d have to scurry off to your local library or bookshop (no Amazon remember). Or, this being the 1980s, you could pop your question on a postcard and send it off the John Dunn’s Answers Please on Radio 2 or to Radio 4’s Enquire Within.


Running for thirteen years Enquire Within offered listeners the resources of the BBC’s Reference Library to answer those “niggling little questions”. In charge of proceedings was Neil Landor (1978-87) and then Dilly Barlow (1987-1991).  In this edition from 21 March 1985 Neil Landor tackles that question of Dutch courage as well as gold braid oak leafs on the caps of senior officers in the armed forces. Riveting stuff or what!
The readers are Hilda Bamber and Christopher Douglas. Those of you with long memories may remember that both Neil and Hilda read the IRN news in the late 70s. The producer of this edition was Stephen Shipley, though I note that editions later that year were produced by a certain Andrew Parfitt, some years before his elevation to Controller of Radio 1.

Continuing this fine radio tradition Simon Mayo offers a similar service to bemused parents in his Homework Sucks feature on his Radio 2 drivetime show.
Posted by Andy Walmsley at 09:00

How lovely to hear my lovely father once again ! I’m Neil’s daughter Rosalyn, and I’m so delighted you’ve been able to post this so that anyone who remembers his programme can listen once again , at least to this episode ! I well remember him writing each week’s script , and using a stopwatch to make sure each segment timed out correctly to fit with the schedule ! Everything done without the aid of the internet ,or a cell phone stopwatch feature !! Thank you so much for uploading and giving me back 7 minutes of his presence !
Sincerely
Rosalyn Landor.