Talk Radio, the UK’s third commercial radio station, officially launched on this day in 1995. Its programme director Jeremy Scott promised a “provocative, opinionated and confrontational approach”, though listeners may have heard little of that in the opening offering from Sean Bolger and Samantha Meah. Perhaps it was all a little too early in the morning.


The third national licence, following the award of the first two to Classic FM and Virgin, had been advertised in November 1993 as a “predominantly speech” station, which the Radio Authority deemed to be 51% in any three hours. Six bids were received with Talk Radio offering an aggressive £3.82m.  Others in the running were Newstalk UK £2.75m, Apollo Radio £2.27m, LBC £2m, First National Entertainment Radio £1.54m and Jim Black Broadcasting with £1.04m.Talk Radio’s bid had the backing of the US group Emmis Broadcasting who ran radio stations in Los Angeles, New York and Chicago, plus Australian based Prime Television and Hambro Bank.
The launch line-up included a number of well-known radio (and TV) voices such as Scott Chisholm, Vanessa Feltz, Anna Raeburn, Terry Christian, Jeremy Beadle, Tommy Boyd, Dr David Starkey and Kiss FM ‘shock jock’ Caesar the Geezer. But MD John Aumonier promised that the shock jock tactics so beloved of US talk radio and employed by the likes of Howard Stern and Rush Limbaugh would not be part of his station’s output. “Number one, the market does not want it. Two the regulatory authority would not allow it.” However he did promise to shake up the cosy image of speech radio in the UK and that the station’s style would be “profoundly shocking” but not offensive.

This is a short clip taken from a test transmission on 12 February 1995.


Though the official launch date was given as Valentine’s Day 1995, the station snuck in early on the evening of the 13th with a three-hour show from Caesar the Geezer at 10 pm. and then an hour of Wild Al Kelly. From 2 am Talk Radio resumed test transmissions until the 6 am official launch.


Providing the tongue-in check quasi-BBC announcements was actor Jonathan Kydd - Talk Radio was transmitting on what had been Radio 1’s medium wave frequencies – over Graham de Wilde’s KPM library music composition The Unknown Warrior. The opening news bulletin was read by Sophie Decker, if memory serves she’d previously been part of Radio 1’s Newsbeat team, before leading into The Dish with Bolger and Meah, a show described as “unremittingly dreadful” by the Daily Telegraph’s Gillian Reynolds. 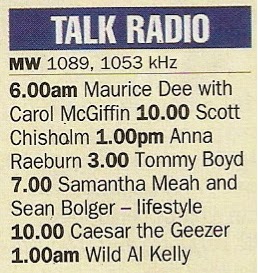 Later that day, at 7pm, the station offered The Rude Awakening with Carol McGiffin and Moz Dee, That programme title – and Talk Radio loved its programme titles in the early days – was a little misleading for an evening show. The reason stems from an eleventh-hour change of heart when test runs of the breakfast show with McGiffin and Dee proved just too rude and just three days before launch it was swapped with Bolger and Meah’s show. 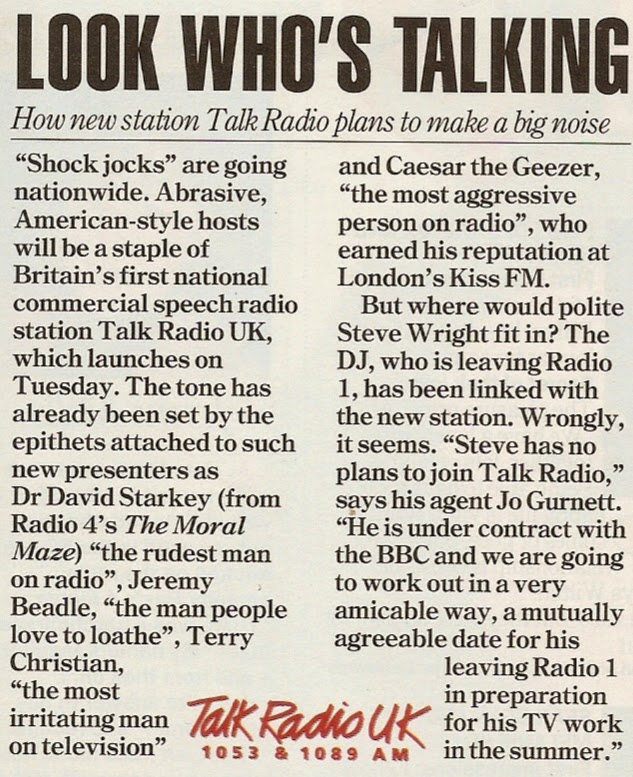 One name missing from the line-up but at the time already floated as a possible recruit was Steve Wright. Speaking to the Radio Times his agent Jo Gurnett denied this: “Steve has no plans to join Talk Radio”. But he’d resigned from Radio 1 just 2 or 3 weeks earlier and had, it transpired, spent four months negotiating with the station. Steve joined nine months later. 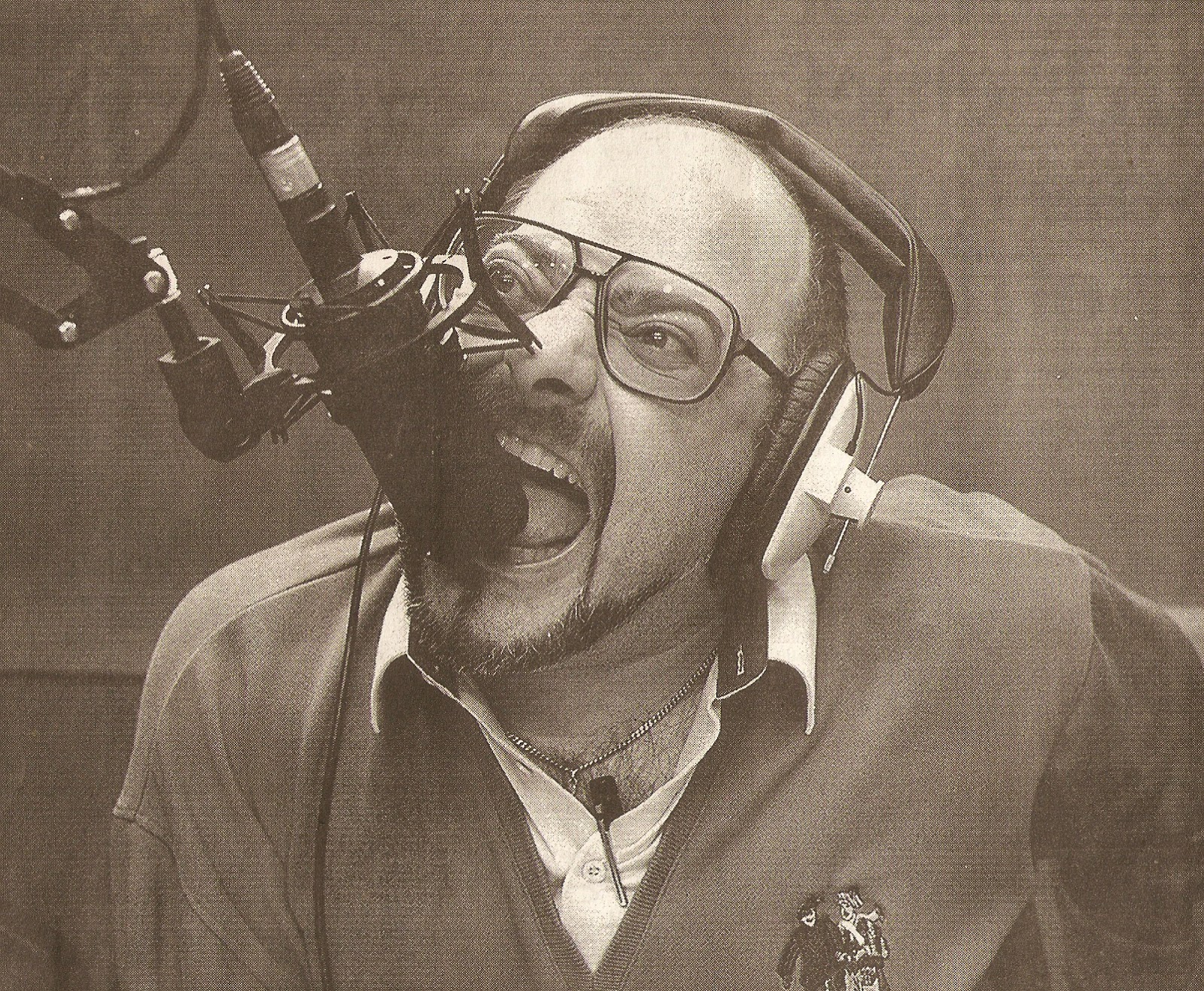 Talk Radio UK faced a turbulent first year on air. A failure to draw in sufficient advertisers compounded with the large licence bid led to considerable losses and an early management shake-up. On air the shock jock tactics of certain DJs – fifteen complaints were upheld by the Radio Authority in the first three weeks alone - meant a number had been dropped by the end of the year. First to be yanked off the air was Wild Al Kelly, his co-presenter Mike Hanson talking to the Independent in April wouldn’t be drawn on the reason why “but let slip it was something about fish.” Kelly was initially replaced by Chad Benson, working on overnights alongside Hanson, before both were replaced by Ian Collins. Others falling by the wayside were Terry Christian and, just 48 hours later, Caesar the Geezer.
By the Autumn 1995 Samantha Meah, Dale Winton, Janet Gershlick and Sue Plumtree had also gone and from October there was a refreshed more news-based line-up that included some old hands: James Whale, Mike Dickin, Jonny Gould, Sandy Warr with First Report, Trevor McDonald with a Sunday morning political show, Simon Bates and Jonathan King. In November Wrighty eventually came on board. Once again the listening figures failed to hit the mark and Bates and King had left the station by the following March.


There’s a whole stack of Talk Radio UK off-air recordings uploaded onto YouTube by user dpro73 (link here) including a recording of the station launch that’s way longer than the one I made, but nothing from Bates or King and only one instance of Steve Wright so here are three recordings from my own archive.
Firstly from 2 October 1995 it’s Breakfast with Bates with Simon Bates, of course, and discussion about the extra-marital activities of Princess Diana. The news headlines are read by Sandy Warr.


And finally from 6 January 1996 it’s the Saturday morning Steve Wright’s Talk Show. With Steve is Georgey Spanswick and his old Radio 1 chum Richard Easter. The guests are former Rugby league player Brian Moore, who years later would go on to present on Talk Radio’s successor talksport, Les Dennis, Jon Culshaw and John Carter, best known for Holiday and Wish You Were Here.

I've been having a bit of a sort out including scanning a lot of old paperwork.

Here are two media packs from Talk Radio, the first from it's launch:
https://flic.kr/s/aHsk5zjxTx