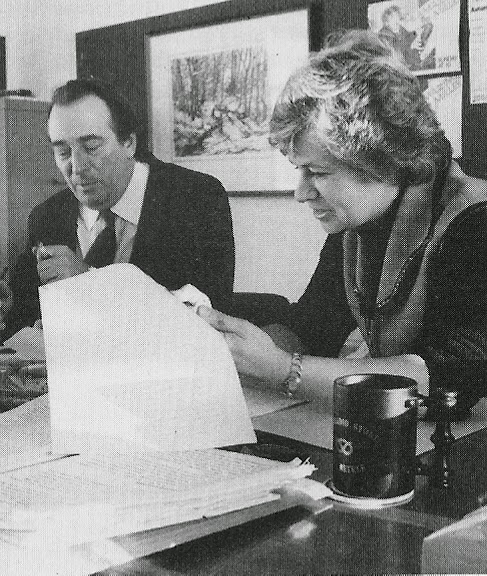 This post was to be titled From Children’s Hour to Woman’s Hour but on reflection it didn’t seem to do justice to the career of Sandra Chalmers who sadly died on 2nd February following a stroke.

Like her elder sister Judith, Sandra’s professional career started early, as an actor on Children’s Hour programmes for the Northern region. But rather then go on to be straight woman to Ken Dodd and globe-trotting on Wish You Were Here, Sandra worked with Tich and Quackers and worked in Manchester and Stoke! 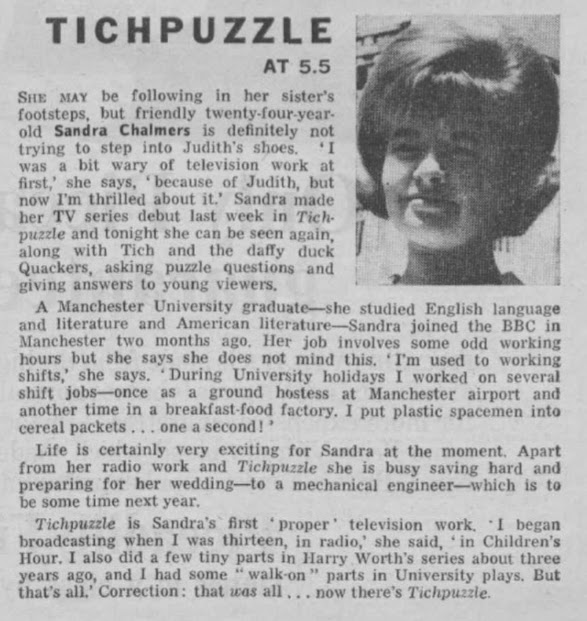 Appearing alongside Ray Alan on Tichpuzzle in 1964 Sandra spoke to the Radio Times:


“I was a bit wary of television work at first”, she says, “because of Judith, but now I’m thrilled about it.” Sandra made ger TV series debut last week in Tichpuzzle and tonight she can be seen again along with Tich and the daffy duck Quackers, asking puzzle questions and giving answers to young viewers.

A Manchester University graduate – she studied English language and literature and American literature – Sandra joined the BBC in Manchester two months ago. Her job involves some odd working hours but she does not mind this. “I’m used to working shift jobs – once as a ground hostess at Manchester airport and another time in a breakfast-food factory. I put plastic spacemen into cereal packets … one a second!”

Life is certainly very exciting for Sandra at the moment. Apart from her radio work and Tichpuzzle she is busy saving hard and preparing for her wedding – to a mechanical engineer – which is to be some time next year.

Tichpuzzle is Sandra’s first ‘proper’ television work. “I began broadcasting when I was thirteen, in radio,” she said, “in Children’s Hour. I also did a few tiny parts in Harry Worth’s series about three years ago, and I had some walk-on parts in University plays. But that’s all.”


Sandra went on to be the Presentation Organiser for the BBC in the North and in 1970 joined the BBC’s newest local station, Radio Manchester, as a presenter and senior producer. She hosted phone-ins, then in their infancy, programmes of personal reminiscences in I Remember and the breakfast show Up and About. In 2010 she was invited back to the station as part of their 40th anniversary celebrations and to read the 10 am news bulletin just as she had done on the day of launch: 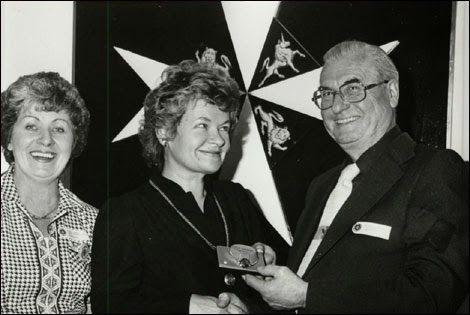 In 1976 Sandra was appointed manager of BBC Radio Stoke (pictured at the top of the page with programme organiser Geoff Lawrence), taking over from David Harding, and becoming the first woman to hold such a position. By 1983 she was down in London as editor of Woman’s Hour – maintaining the Chalmers family connection with the programme; Judith had presented it during the 60s. Under Sandy’s stewardship the programme, according to Jenni Murray, “started to proactively set its own agenda and play a more active role.” The Woman’s Hour Unit at that time also produced the Radio 4 phone-in shows Tuesday Call and, jointly with the World Service, It’s Your World.

It was back into management from 1987 when Sandy became Head of Radio Publicity and Promotions during which time she created The BBC Experience before moving on to become General Manager, External Affairs. She left the Corporation in 1994 and for six years was Director of Communications for Help the Aged, offering media training and regularly acting as an expert contributor on TV and radio on over-50s issues.

Latterly Sandy ran Chalmers Communications, was on the Board of Directors at Saga Radio and presented programmes on Primetime Radio between 2000 and 2006 such as The Collection on Sunday afternoons. Here's a scoped version of a show from 14 December 2005:

In 2010 memories of Children’s Hour were revisited in a series for Radio 7, in this introductory clip from a Radio 4 Extra repeat:


A big thank you to Noel Tyrrel for the Primetime Radio audio.
Posted by Andy Walmsley at 09:30

I was sorry to hear this news which I read first on 'Random Radio Jottings'. I did work experience as a 17 year old on Radio Manchester. Sandra Chalmers was one of station's leading lights. I remember her as being unfailingly cheerful and encouraging. In fact I never heard her say a bad thing about anyone - unusual in the Broadcasting business! Lovely to hear her in conversation again.

Thank you for your comments. Yes I'm surprised that neither Woman's Hour or The Last Word haven't (so far) mentioned Sandra's passing.