In the wake of the early 60s satire boom you’d have been hard pressed to find anything on BBC radio that poked fun at the establishment or, Radio Newsreel apart, dissected the week’s news.


The saviour came in the unlikely guise of Nicholas Parsons. In 1964 Parsons and writer Alistair Foot, who’d worked with Nicholas on The Arthur Haynes Show, worked up a format for a show they called Listen to this Space. “We were going to quote from named newspapers, send up the politicians of the day with impersonations”, recalls Nicholas.
The idea got the green light from Roy Rich, Head of Radio Light Entertainment, and was assigned to established BBC producer Bill Worsley. The pilot was co-written with Anthony Marriott with a cast comprising Denise Bryer (aka Mrs Parsons) and Roger Delgado with songs by Libby Morris and music from the Tony Osborne Trio.


The story goes that the pilot was not a resounding success, even the producer thought a full series unlikely. Apparently a tape of the show found its way to Director General Hugh Carleton-Greene who, seeing its potential, gave it the nod.
Listen to this Space finally aired on the Home Service on 23 April 1965 with the only cast change being the replacement of Delgado, who was unavailable for the series, for Bob Todd. With Denise providing the female voices, Nicholas was more than adept at covering the male impressions, though he was joined in later series by Peter Goodwright and Barry Cryer, who put in a fine performance mimicking Harold Wilson. 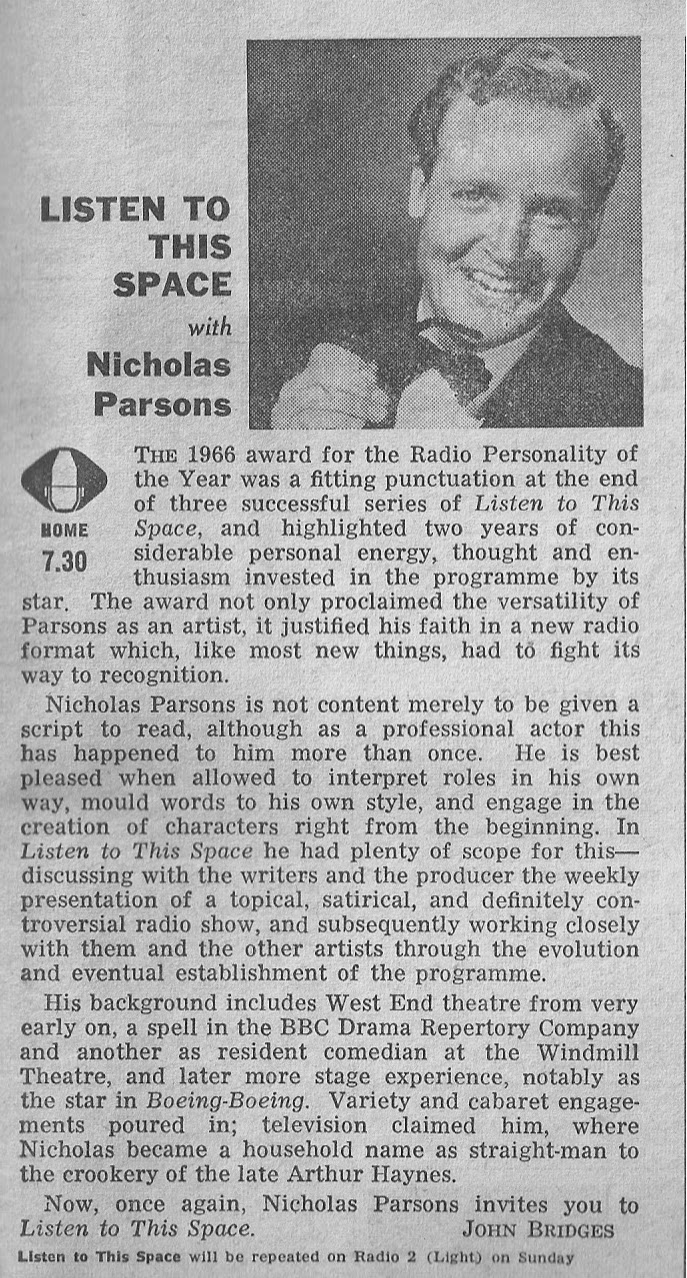 Though now largely forgotten and, of course, like all topical shows never having had a repeat, Listen to this Space proved popular and ran for four series, plus a 1968 follow-up Follow this Space. By all accounts the ‘Establishment’ loved it with Nicholas Parsons receiving invitations to visit the House of Commons from MPs that followed the show. In 1967 the Variety Club honoured him with the Radio Personality of the Year award.


To give you a flavour of what Listen to this Space sounded like here are extracts from second and fourth series together with an introduction by Nicholas taken from BBC Radio 7/4 Extra edition of the Comedy Controller that contained the only known repeat (other than the in-series repeats on the Light Programme/Radio 2) of the show. The combination of gags, impersonations and comic songs is redolent of the later News Huddlines (more of which soon).


And before I leave the sixties there’s another long-forgotten and, more than likely, completely wiped series that took a sideways look at the week’s news: It’s Saturday.  Starting in June 1967 this was a Home Service/Radio 4 programme that aired in the Northern region only on Saturday morning between 8.15 and 8.45 (later 8.20 to 8.45 am) whilst the most of the country enjoyed From Our Own Correspondent.


The original host was James Hogg, at the time a Look North presenter and later on Nationwide. By 1969 he’d been succeeded by Bill Grundy, who’d been mainly at Granada TV, though he had done some radio work, on the North Home Service Sport Spotlight and representing the North on Round Britain Quiz for example. 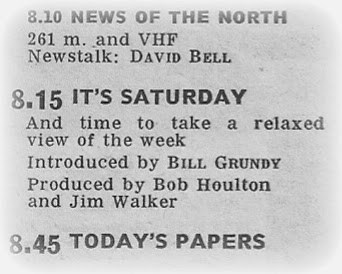 It’s Saturday was noted for its “irreverent attitude to the news and to public figures” and remained a Radio 4 fixture until 1973. However it gained some notoriety in October 1970 during the Tory Party conference in Blackpool when it featured items that angered BBC bosses and led to the ‘resignation’ of Grundy, singer-songwriter Alex Glasgow, freelance producer/announcer Jim Walker and reporter David Bean.


The man in charge of operations in Manchester, Grahame Miller (Head of Programmes, North) was unhappy with an announcement that went “Bill Grundy has just been to Blackpool, where apparently a group of people have taken a week off to hold a conference to condemn absenteeism.” There was also reference to delegates “rolling over like dogs waiting to be tickled” when Sir Alec Douglas-Home spoke. Finally Alex Glasgow sang a satirical song about selling arms to South Africa: “I’m going to sell a little bomb to South Africa. Just a teeny-weeny bomb to South Africa…”
Programme producer Barbara MacDonald was told to “restrict the political content”. Alex Glasgow was unhappy about being “pre-censored” and Bill Grundy was “appalled”. “It’s Saturday was”, he said, “acerbic about both main political parties. To try to treat it in this way is to knock all the life out of an extra-ordinarily lively programme”. It’s unclear why the Corporation chose that moment to administer a rap over the knuckles but at the time the press noted a recent letter in the Daily Telegraph from Tory MP Harold Soref who described the programme as “sneering”, “vitriolic” and a type of “public filth.”


With thanks to Dave Rhodes for alerting me to the existence of It’s Saturday.
Posted by Andy Walmsley at 09:00

Thanks for this very interesting jotting. My father, David Cumming, was a writer rather than an actor (much as he may have wanted to be the latter). I've only discovered after more than 50 years that he appeared on the programme in Series 3; I'd always assumed he was a writer for it. Sad to say he kept no recordings so I can only assume he made the occasional waggish and topical remark and I hope he steered clear of impersonations since he couldn't do them. (Not much of an anecdote this, I know - but perhaps there are some more recordings out there somewhere.)