The One with the Ostrich 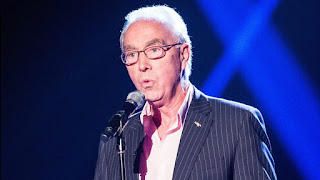 All of a sudden Bernie Clifton, that's the one with the ostrich not the chap with the emu, is back in the news. In the current series of The Voice he turned up singing The Impossible Dream. The title turned out to be prescient. No chairs turned. But he has released it as a single anyway.  Then earlier this week he was the guest of Martin Kelner on BBC Radio Leeds.

Clifton was at the height of his TV fame in the late 1970s and 1980s when he first rode Oswald the Ostrich on Crackerjack appearing alongside Peter Glaze and Ed Stewart, and then popping up on numerous variety shows. On national radio he was a regular panellist on the comedy game show You've Got to Be Joking and between 1982 and 1986 starred in three series for Radio 2, Bernie Clifton's Comedy Shop.

The only recording I have of Bernie Clifton's Comedy Shop is that broadcast on 9 February 1984 (series 2 episode 3). Unfortunately it's on a cheap tape so the quality is a bit iffy but as Radio 4 Extra is unlikely to give it a second outing I thought I'd put it online. With Bernie are Pat Mooney, Tony Peers and Caroline Turner. The show was produced by Mike Craig.

Postscript: I see that Radio 7/4 Extra have repeated an edition of Bernie's show as part of Open Mike: Mike Craig's Radio Memoirs. Does anyone have a copy please?
Posted by Andy Walmsley at 13:00

That'll be the one then, thank you Mark.

Got that one here: https://www.mediafire.com/folder/2lkmtvjsa7bdd/Shows