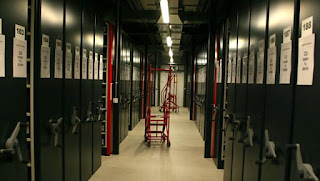 Oh for a few hours - make that weeks - rummaging through the BBC's Sound Archives. Talk about a kid in a sweetshop. The archive has long since moved from the fifth floor of Broadcasting House, as mentioned in an article below, and is now stored in climate controlled vaults in Perivale.

For many years on a Monday morning, in a gap between Today and the 9 o'clock news, Radio 4 used to feature a series of programme, more often than not presented by the late John Ebdon, that plundered the archive for unusual and quirky nuggets. In a similar vein this sound clip comes from a short series that aired in 1980 called Keeping Track on "the art, science and business of sound recording."

Here, the presenter, Peter Clayton, talks to Tony Trebble, at the time the BBC's Sound Archive Librarian, and asks him to select some of his favourites pieces from the collection.


I was reminded of this programme when I recently read about the death, in April last year, of Tony Trebble. There's an obituary for Tony, written by Glynne Price, in the February 2016 issue of the BBC's Prospero and also on the Noticeboard for former BBC staff. Part of it reads:

"The first half of his BBC service was in library services, film and radio, when his reliability and discretion led to him being entrusted with the confidential recording for posterity of the career experiences of eminent BBC hierarchs. Moving on to Television Personnel eventually he settled effectively as a one-man Secretariat to successive Controllers and as such was ideally well-suited. Affably trustworthy he was able to deploy his own orderly-mindedness and the precise love of language that he so much admired in others particularly in navigating the treacherous waters which separated management and unions. His irrepressible capacity to find humour in most human dilemmas never succumbed to the many incipient idiocies of bureaucracy. He was a dependable source of honest counsel for anyone shrewd enough to seek it". 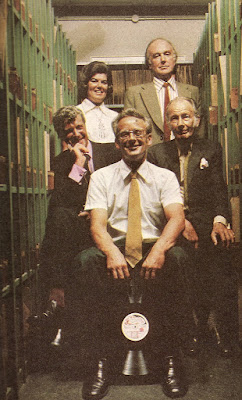 Back in 1975 Tony was interviewed for the Radio Times by Alexander Frater. Here's an extract from that article:

"Trebble, a spare, bespectacled , fit-looking man with an encyclopaedic knowledge of things past, has overall charge of more than 63,000 recordings which cover, quite simply, everything. There are current affairs, the voices of the famous and descriptions of great occasions.

There is a huge section devoted exclusively to the last war. There is music of every type, from assorted versions of Messiah to a Greek lady playing a 'jumping dance' on the bagpipes. There is even a section dealing entirely with rotten singers and terrible performances. There is also drama, dialects, social history, special effects and a unique collection of 5,000 bird, animal and insect noises.

Sound Archives was born in the 1930s, when it was called the Permanent Library. As well as collecting recordings from the past, they started carefully recording, for the benefit of future generations, the present as well. The 1931 Derby commentary was the first they made and today they file away, for posterity, the best 600 hours from each year's broadcasting.

Sound Archives consists of a small suite of rooms on the fifth floor of Broadcasting House, fitted with shelves and stacked with records. Trebble refers to it as his pantry. 'The records are simply ingredients which are used for mixing into new programmes. We get about 50 requests a day for material which producers want to incorporate into their current projects'.

I asked him what recording appealed to him most. 'A woman in 1941,' he said, without hesitation. 'She had a loud upper-class voice and she said "First we have to win the war. Then we've got to reconstruct the world. Quite a task, really." I still think of her in awe.'

Sound Archives intend to continue recording people like that as long as they can. And as Tony Trebble says, 'When the Millennium comes and the Last Trump, we shall record that too'."

That mention of "600 hours" each year pales into comparison with the current acquisition rate of 6,000 per month.

Finally, before I leave the subject of the archive here's a fascinating Guardian Tech Weekly podcast from 2011 recorded just before the BBC moved from Windmill Road to Perivale:

http://www.theguardian.com/technology/blog/audio/2010/aug/18/bbc-archive-roly-keating-windmill-road
Posted by Andy Walmsley at 10:30