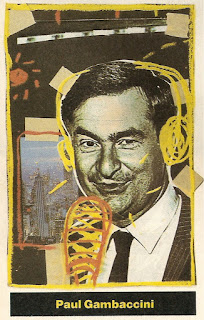 News this week that Paul Gambaccini is to be the next regular presenter of Pick of the Pops. He's probably in the studio now practicing those rundowns to At the Sign of the Swinging Cymbal.
The announcement is steeped in irony: the post only becoming vacant because Tony Blackburn was, for some inextricable reason, caught up in the flak from the Savile Inquiry. Gambo himself was off-air for a year as part of a 'Yewtree' investigation.

Paul's move to Saturday lunchtime means another show comes to an end as, on 2 July, he'll present his final American Greatest Hits, a radio regular, on and off, for over 40 years. "Until next week's Paul Gambaccini show plays next week's American hits, Bruce Springsteen is number one ...."


It's a show I first used to listen to in the mid-70s on  Saturday afternoons after Fluff had finished his rock show. That Radio 1 run ended in 1986. In 1998 he was back, this time on Radio 2. Here is that first return show from Saturday 18 April 1998, with Gambo following Johnnie Walker who was also back at the Beeb. The first record, inevitably, is Bruce Springsteen's Born to Run, the track that both started and ended the original run of America's Greatest Hits on Radio 1.

I can't help but feel this is going to be a real waste - i love America's Greatest Hits, its informative, educational and has a great balance of music past and present and Paul always plays strong material. I have no doubt he'll be a great POTP presenter but I hope he is allowed to carry his knowledge and charisma into the show. We need more Paul Gambaccini's on the radio at the moment, or at least people who know about the music they are playing!

Paul really should be given a show on 6Music because the new music he played is not heard anywhere else. Such a show would sit nicely with POTP.