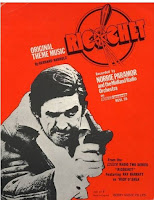 He was the square-jawed news reporter with a nose for trouble investigating the criminal underworld where all the baddies sported a foreign accent and their evils plan were always thwarted with fisticuffs. Michael John O'Shea, known as Rick O'Shea (geddit?) was the Dick Barton of his day, the day being the mid-1970s. And mention of Dick Barton is apposite as in two episodes, much like one of those CSI crossover episodes, the retired special agent makes a guest appearance.

Ricochet was a drama series running on BBC Radio 2 in 1974 and 1975. Stripped across the week the stories unfolded at breakneck speed in their 15-minute timeslots, scenes punctuated by the dramatic theme or the sound of a ricocheting bullet.

So what was Ricochet all about? Fortunately the Radio Times of 29 June 1974 fills us in:

"Not since the days of the mighty Dick Barton has there been a team like it: Rick O'Shea, the London Globe's ace newshound, backed by Dusty Miller. The glamorous Jan Paxton and lens-woman Penny Trinket. A team with a nose for trouble, an instinct for just which cupboard hides which skeleton. According to their creator, Tony Scott Veitch (who should know) they are quite a bunch. 'Dusty Miller is a reporter and a very good man with his fist. Penny, she's very trendy and comes from Liverpool. And Jan Paxton is O'Shea's assistant, a kind of Miss Oddjob. She has a very ambivalent relationship with her employer.' And Rick O'Shea himself? 'He'll do anything to get his story,' says Veitch. 'Expense is no object. He can charter a jet or whistle up a helicopter any time, and lives in a penthouse behind Harrods.'

So - what will happen when Rick and Co tangle with the devious Hugo de Witt? Can the Special Branch ever keep up with the O'Shea team. How much longer will the editor of the Globe put up with Rick's expenses?"

Playing O'Shea was pock faced Aussie actor Ray Barrett of The Troubleshooters fame and voice artist on numerous Gerry Anderson productions. Indeed in a delightful piece of synchronicity Barrett was the voice of DJ Rick O'Shea in an episode of Thunderbirds called Ricochet. Jan Paxton was played by Margaret Wolfit (daughter of renowned actor-manager Sir Donald Wolfit) and Dusty Miller by Alexander John.

Unfortunately it seems that the BBC didn't keep the tapes of Ricochet - its likely they were dumped in the 80s -  so don't expect any repeats on Radio 4 Extra. But at least two episodes have been saved by a private collector, the two episodes that included the guest appearance of Noel Johnson playing Dick Barton that were broadcast in Christmas week 1974. I was alerted to this search for old episodes by Fred Vintner when he first contacted me back in late 2014. Fred runs the Navy Lark Appreciation Society and the connection here is that long-time producer of The Navy Lark was Alastair Scott Johnston who also produced Ricochet. Some years ago Fred had been giving a book of cuttings by Alastair's daughter, Fiona Scott Johnston, that included some of the Radio Times billings and artwork for the show, this set him off on a quest to find out as much about the programme as he could and to unearth those elusive recordings.

Much of what we do have about Ricochet is the artwork and the theme tune. From the off the Radio Times would print a weekly strip cartoon on the Friday radio billing pages. I have an incomplete collection of the magazine for that period and a few of the strips are reproduced below. They are credited to Malcolm Harrison (about whom I know nothing) and scriptwriter Tony Scott Veitch. Veitch by the way was born in Scotland but lived for many years in Australia and wrote adventures series for both the BBC radio - Overland Patrol set in Oz (1965-7), Nicholas Quinn-Anonymous (1966), Six Steps in the Dark (1967), The Young Pioneers, again set Down Under (1967-8) and Mr Pybus (1970-71) - and the Australian Broadcasting Corporation as well an penning many novels, mostly Westerns, under the pseudonym Scott McLure. 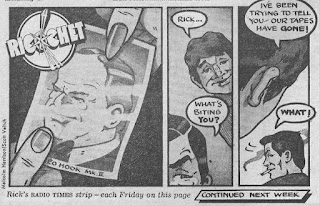 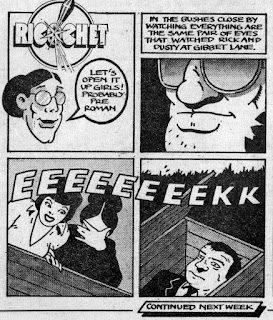 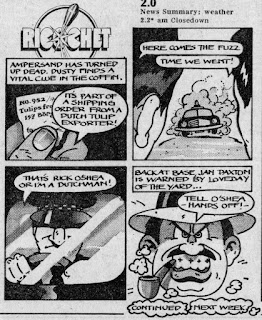 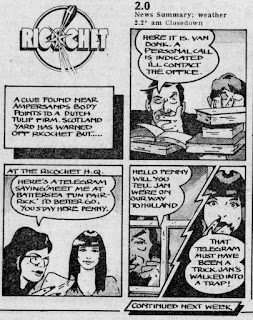 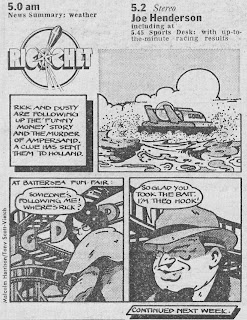 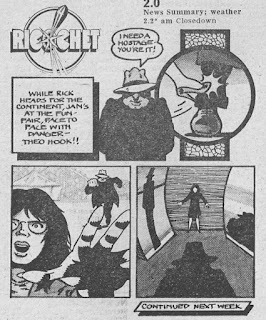 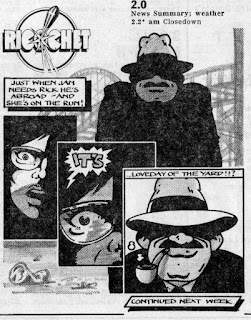 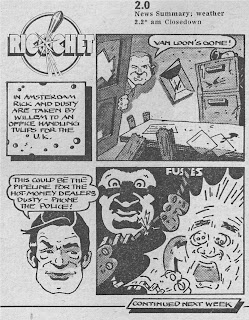 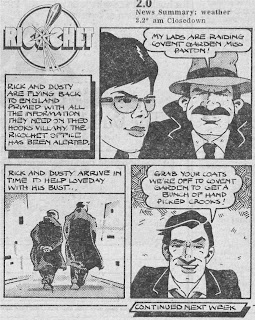 The theme tune was released as Ricochet with added gunshot effects in a recording credited to the BBC Midland Radio Orchestra conducted by Norrie Paramor. The single from BBC Records (RESL20) was released on 7 June 1974 as well as cropping up later in the year on an MRO album The most beautiful girl in the world (REB180). The track, under its original title Fasten Seat Belts, then appears years later on the CD compilation Girl in a Suitcase (Winchester Hospital Radio 2001) but here credited to the Gerhard Narholz Orchestra. Austrian composer Narholz, who also recorded under the name of Norman Candler, wrote the tune. It's this version that then ends up doing double theme tune duty when it gets used again on Radio 2 in 1980 as Pete Murray closes Open House and moves to a new weekend slot.

Here's the MRO version of Ricochet in full and in use on the programme.


 
And this is the Narholz version as used by Pete Murray together with a clip from his Saturday show.

And that's about as much as I know about Ricochet. Needless to say if you have a tape of the show lurking in the loft please contact me.

Thanks go to Fred Vintner.
Posted by Andy Walmsley at 11:00

Hi, I am the Fiona, the daughter of Alastair Scott Johnston. I am aware that he does some recordings of the programme, or should I say they may still exist. His ex-wife is now selling the family home and she has broken all contact with Alastairs children, so the availability of Alastair Scott Johnston’s personal archive of tapes etc is unknown. Hopefully I will soon know what and where it all is. I ask you to be patient and I will scoop on the old house and try to get my fathers property before she builds a bonfire and burns it all. I jest not because this is what she does when someone dies...burns all of their property! Much of it I know of, but his books, tapes and files I fear are at risk. Hopefully we will soon know more.

All I can tell you, which is not much help, is that my father went to Pebble Mill in 1974 to record the programmes and the first one was broadcast in late spring, (May or June) of 1974. You are correct I sent the clippings to Fred Vintner. It may help if you know that at the same time he was also producing a panel show called ’Quote-un-Quote’.

I wish you and others luck in their search, however I know that my father would record a cassette tape of all of his programmes. (He even signed the authority!!!)

Thank you Fiona. I'm pleased to read that some of your father's archive may have survived but saddened to hear the circumstances surrounding it. If you do have any further news please email me at radiojottings (at) gmail (dot) com

Hi. I’m Duncan Brown and Alexander John who played Dusty Miller was my father. As a child I remember using the old scripts from Ricochet with dad’s annotations as scrap paper for drawing on. I have the BBC single of the theme tune with the theme to Dial M for Murder as the B side. You mention that a private collector has recordings of two episodes. I’d love to get a chance to hear them if that were possible.

Hi Duncan, Fiona here…..I too used the backs of scripts for drawing paper! Send me a private message and I will give you direct contact details.

Hi Fiona. Lovely to hear from you. Sorry I don't know how to send you a private message though

No worries I will give you a rarely used email address that will come through to my iPad. It’s duncroft(at symbol)Mail(dot)com. Try that and I can then give you my real contact details.