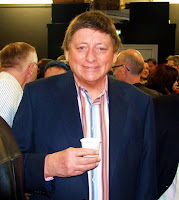 The recording of his voice will be played again this September. "This is Radio 2, the Light Programme". It was a moment in radio history of which he was justly proud. He was to make something of a career out of launching radio stations - later came Radio 210, Blue Danube Radio and Vienna International Radio. The voice is that of Paul Hollingdale whose death, at the age of 83, was announced this week.

Paul was born in Brighton in 1938. I can find nothing about his early upbringing or education other than the fact that as a lad he appeared as an extra in the 1947 film release of, aptly enough, Brighton Rock.

His National Service was in the RAF and he was eventually posted to RAF Wahn in Germany, fairly close to the headquarters of the British Forces Network in Cologne. He was keen to get into radio and after helping out in the gramophone library was offered the chance to produce a Latin American dance programme. Soon after he was in front of the microphone as one of the BFN's team of announcers looking after the early morning show Musical Clock. His passion was the cinema, perhaps spurred by that early dalliance with filming in Brighton, and he used to broadcast film programmes whilst with the BFN. It was in 1959 that he made his first appearance on the BBC as the host of the German leg of Two-Way Family Favourites.

Back in the UK in 1960 Paul was looking for work when he met up with Canadian DJ Doug Stanley, who'd also appeared on BFN Cologne. Stanley had set up the grandly named Commercial Neutral Broadcasting Company Ltd - "your friendly host of the Dutch coast" - an English speaking pirate radio station based on Radio Veronica's ship the MV Borkum Rift. Paul, who by now has also found work in the London studios of  Radio Luxembourg on the Phillips sponsored The Six O'Clock Record Show, joined CNBC from autumn 1960 and stayed there to the summer of 1961.

In late 1961 Paul was back on dry land working freelance both for the BBC on shows Teenagers' Turn, Playtime and Things are Swingin' as well as appearing on Radio Luxembourg as one of the announcers out in the Grand Duchy on shows such as The Big 'O' Show sponsored by Oriole Records.

At this point I'll let Paul take up the story: "I had been working for Radio Luxembourg since the early sixties, either as a London based DJ presenting sponsored shows, or living as a resident on the Grand Duchy.  I was in fact there for two and a half years.  At Easter in April 1964 I travelled to Amsterdam with another DJ, a friend called Don Wardell, as we had heard that Radio Caroline was being launched that weekend. Because the signal would be inaudible, we decided on Holland because it was near the coast. We heard the first broadcast with Simon Dee and I told Don, that in my opinion, this launch would change the whole history of UK Radio. During the Summer we heard the impact that Caroline was having, and I made a decision to leave 208 and return to London in September of that year.  I heard that the BBC were looking for contract announcers and I applied and got a job".

Having joined the Presentation team, working for Andrew Timothy, he would do the usual rounds of news bulletins, continuity announcements, concert introductions and gramophone record shows like Morning Music, Delaney's Delight, Mack is Back, Swing Into Summer, Stay Late and the first editions of Nord-Ring.

Here's Paul again: "One of my first hurdles was to handle the death of Churchill which I announced with all the protocol that went with that on that Sunday morning in January 1965. Andrew Timothy told me that I would have to be de-luxembourgised  and I was directed to listen to various announcers like Colin Doran, Frank Phillips and Tim Gudgin.

Because of my versatility, during the next couple of years I was put to work presenting an eclectic mix of series like Music in the Peter York Manner and Mack is Back, a big band show with the then very popular Ken MacIntosh and his Orchestra broadcast from the Playhouse Theatre down by the Thames embankment. There were others like occasional programmes on the then Home Service with such groups as the Novelairs directed by Edward Rubach.  I was also involved in Nord-Ring, where I presented various light music concerts travelling around Europe which were aired on the Light Programme. In between all of that, I was a newsreader on Radio Newsreel and did occasional shows for the World Service.

I then began working with (producer) Doreen Davies on the show Swing Into Summer - a three hour afternoon segment. In fact I was used at every opportunity and from 1964 to the start of Radio 2 in 67 - I probably presented more shows than anyone else.  The reason for this was that many of the older brigade of announcers like Frank Phillips, Alvar Liddell, John Snagge, John Webster etc. couldn't quite believe that changes were in the air and so they didn't want to involve themselves and weren't in tune with the trends in pop music at that time. Apart from that they were all coming into the final furlong of their careers at the Beeb. 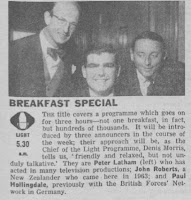 By 1965  the long running Morning Music sequence, which was un-announced except for time checks, news and weather, was in need of a change and Breakfast Special came in being. So some of the 'Light' announcers such John Roberts, Peter Latham, John Dunn and myself were given the show to  present on a turnabout basis.  It was then they decided to introduce a limited amount of 'needletime' into the shows -  one disc every fifteen minutes. And there were inserts of vocals from  groups like The Settlers, The Peter King Chorale, Lois Lane etc".

In September 1967 came that famous opening announcement, Controller Robin Scott having chosen Paul for the task. If the usual Saturday morning pattern had been followed that would have fallen to Bruce Wyndham.

Paul continued to appear on Radio 2's Breakfast Special, presenting his final show on Friday 2 January 1970. Remarkably an off-air recording exists of that show. "Hello and good morning everyone. This is yours truly Paul Hollingdale here for the very last time..."

No reason was given for Paul's departure but in 2012 he candidly told me what had occurred backstage and I hope that he wouldn't mind me repeating the story: "I have never mentioned this before but my departure was very curious.  The then Controller of the Network, Douglas Muggeridge, didn't particularly like me on the air, despite the fact that I was very popular with the listeners.  One day I was called to his office to say that I would be coming off Breakfast Special and that was it.  As there was no explanation - I told him that I wouldn't mind returning to announcer duties - but he was emphatic he wanted me out of the building. I had no confrontation with the man.  I hardly knew him as he was tucked away in his office most of the time together with all the other 'suits.'  My departure created a lot of problems at the time as there was no-where else to go.  I have to tell you that I felt a lot of anguish at the time of my leaving, as I had given every hour of my life to the station, even taking up residence In Hallam Street adjacent to Broadcasting House".

In the event Paul headed back to his home town of Brighton, for a while working freelance on BBC Radio Brighton and also meeting up with local singer Johnny Wakelin whom he ended up managing for a few years.

Regular radio work beckoned again when Radio 210 opened in Reading in early 1976, again Paul was the first voice on-air, or strictly speaking the first DJ, if you count Arthur Lowe's appearance as Captain Mainwaring. Paul recalled that "210 started very middle of the road. That didn't last long and a few months later we were playing Top 40 stuff."

In 1979 Paul helped found and launched the English-speaking service from ORF, the Austrian state broadcaster, Blue Danube Radio. Initially he would split his time between Vienna and the UK but eventually his beloved Vienna would become his home for many years. During the 1980s and 90s he was also heard on Chiltern Radio (audio here), presented film programmes and reviews on LBC, Radio Luxembourg and Sky TV and was part of the launch line-up for Country 1035.


Blue Danube Radio closed in 2000 but Paul continued to work for ORF and other companies such as Inflight Productions. In September 2007 he made a one-off return to the BBC for Radio 2's 40th anniversary to recall his role in the start of the network. (audio here) In October 2012 he launched his final radio project, an English-speaking news and music station, Vienna International Radio. Here's Paul on VIR on 14 November 2013.

In recent months Paul gave an extensive interview about the Light Programme and Radio 2 for inclusion in a couple of documentaries produced by Made in Manchester that are to air on Radio 2 this autumn. Ever the radio professional, whilst in his hospital bed he continued to record reports for Vienna International Radio. He died of cancer on the morning of 5 July.

I never met Paul but from 2012 onwards we had an email correspondence about his radio career and he was always more than willing to help me with my research for the blog. On occasions I was able to provide him with copies of some of his old shows and he was grateful for being reunited with his earlier self. He once told me that "I always enjoy your gems from the past. I think most people in radio in the UK think I have retired to Eastbourne and residing in the Home for the Bewildered DJs.  How wrong they are". I was saddened to hear of his death and I hope that this tribute goes some way to providing a more complete picture of the career of  a broadcaster whose role in radio history is assured.
Posted by Andy Walmsley at 11:30

I worked with Paul for a long time at Radio Luxembourg and we always go along very well. The last time we met was at 'The Radio Academy' to celebrate all things 'Luxy' which is where I took the above photo.
Alan Bailey

Sorry to hear of Paul's death. I worked with him and for him in the 70', 80's and 90's.
I would like to pay my respects if his funeral is in the Brighton area.
Chris Seymour

Paul got me an audition at BBC Radio 2 early in 68 as Ian Damon the name I used on Big L Radio London in 67. It led me to do news reports on Roundabout that year. I also worked with him at Blue Danube Radio in 12/79 after my time at Capital Radio 74 to 79 using my real name of Ian Davidson I was sorry to have missed his funeral in 7/2017. Cheers !