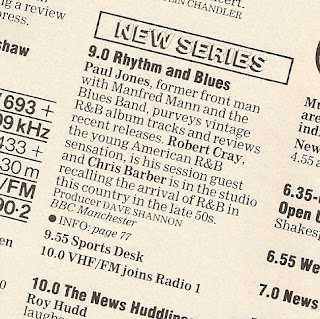 Rested is, according to one dictionary definition, "healthy and active after a period spent relaxing".  But you can be sure that when a BBC press release is issued that any programme marked up as "rested" will not be making a return to the schedules. It will be forever consigned to the archives.

In January Radio 2 announced a schedule shake-up that comes into effect later this month. Getting the elbow, sorry, "rested", are The Organist Entertains, Listen to the Band and The Radio 2 Arts Programme. All shunted into the sidings as the network becomes increasingly popified. I'll be looking at the history of organ music and brass bands music programmes later this week.

Another casualty of the changes is Paul Jones, presenter for the last 32 years of a rhythm and blues show. Jones is, of course, steeped in the music of the British R'n'B scene and is a contemporary of the likes of the Stones, Long John Baldry and the late Alexis Korner. Jones talks of "passing over the baton" though one suspects he would have relished the chance to stay on. 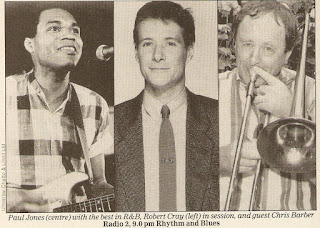 The programme started on 10 April 1986 produced in Manchester by the late Dave Shannon. Paul's first guests in session were Robert Cray and Chris Barber. 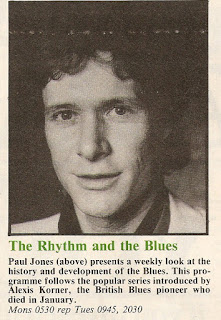 Paul had broadcast a few times before but most of these shows were on the BBC World Service with Counterpoint in 1982 and 1983, and again in 1986, and taking over from Alexis Korner on The Rhythm and Blues Show from March 1984. On Radio 2  there had been a three-part series on R 'n' B in 1985 and the week before the new show started he'd sat in for David Hamilton. His Radio 2 Rhythm and Blues programme remained a Thursday night fixture until April 2007 when it moved to Mondays.

From Monday 25 April 2011 comes this specially extended show marking Paul's 25th year on Radio 2. It includes sessions from 24Pesos, a fantastic set by Kyla Brox and Danny Blomeley and, in the second half from Marcus Bonfanti and Oli Brown.


Fortunately blues music isn't to be swept to one side by Radio 2 as Cerys Mathews takes over from Monday 14 May. Paul's final show, with guest Eric Bibb, is still available to listen again.