If you have been, thanks for listening 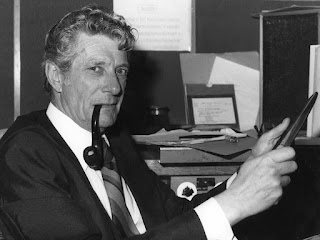 Long-time listeners of BBC Radio 4 who have been enjoying Greg James's new series Rewinder may have an unerring sense of deja-vu. Yes, for a programme that makes a virtue of dipping into the Beeb's sound archives it's a recycled idea. For the best part of twenty years Radio 4 offered listeners a regular Monday morning archive programme. And the voice most associated with that slot was John Ebdon.

Ebdon came to radio in 1962 after his voice was heard by BBC producer Denys Gueroult at the London Planetarium where Ebdon was providing commentaries (he later became the director). He has asked to make occasional broadcasts for the programme, A World of Sound (Home Service then Radio 4 1960-69) which featured recordings from the Sound Archive linked together by Ebdon, adopting a style which would later be described as "whimsical musings with which he threaded carefully excavated conversational snippets."  Essentially adopting a storytelling role, a similar series developed specifically for Ebdon, Nonsense at Noon (Home Service 1966-67), followed and he also gave talks on Woman's Hour and Home this Afternoon.

Some of the A World of Sound programmes filled the post Today gap at quarter to nine on Monday mornings when Yesterday in Parliament wasn't on and they usually consisted of sound archive material with presenters like Robert Stannage, Ann Meo, Alan Keith and Harold Abrahams with Memories of the Month), as well as John Ebdon. When Radio 4 came along that 15-minute slot was variously filled by short, usually humorous talks as well as more mining of archive from a clutch of presenters that included Ebdon (see below), eventually adopting the long-running Radio Times billing of "John Ebdon, in which continues his investigation of the BBC Sound Archives but once again comes to no serious conclusion".  His opening greeting "How do you do?" and sign-off "If you have been, thanks for listening" became catchphrases.

From 1968 until the end of 1986 John's rummage amongst the archive clips aired every 3 or 4 weeks. Though only 15 minutes long they were carefully crafted and involved hours of research and writing that John totally immersed himself in.

In Hello Again! Simon Elmes recalls how John worked: "Slim, feline and svelte, John would pace into the office and, in exactly the same almost reproachful and tentative manner he adopted on air, greet us with a cheery 'hello'. He would then head off for days of incarceration in his favourite eyrie in the Archive, mining for fragments of old recordings which he could lift in order to 'illustrate' his lightly witty narratives" 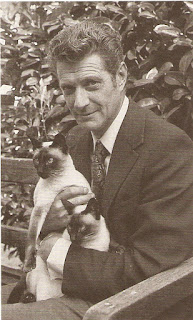 John's real life Siamese cat Perseus (surely the inspiration for Ed Reardon's Elgar?) was an unseen and unheard presence in many of the broadcasts and was often used to voice some of his more contentious opinions. When Perseus passed onto kitty heaven it made the Radio 4 news and a newspaper obit.

Ebdon, born in 1923, had since boyhood had a passion for Greece and its history and culture. As one of his producers of the Monday archive programme, Angela Hind recalls he was "So educated; so brilliant, so bonkers.  He was obsessed with Greece - he'd lived there for years and loved the place.  He reminded me of Byron in that respect.... anything Greek he absolutely adored.  He was the only man I knew (back then it was most unusual) - to wear a kaftan when he was relaxing at home"

The programmes, produced by the Archive Features department under Head Producer Helen Fry (the department was also responsible for Pick of the Week,  Bookshelf, Enquire Within and The Year in Question) required only a light touch from whichever producer was assigned to the quarter to nine Monday series. Angela Hinds told me "I never had to do anything much at all.  He chose the subject, researched the archive, chose the bits he wanted and wrote the script - which he then ran past me with timings all neatly written in the margin.  I was quite amazed that I had any role at all, especially as a producer! I learnt a lot from him really too - as the scripts were punctuated with quotations, observations about life and extraordinary facts.  Which by the way - I never checked.  I just assumed he knew what he was talking about".

"The programme that John presented, was really just a platform for him to indulge his passion (finding the archive); and to be totally in charge of something in his golden years.   A really lovely chap - and producing the programme really wasn't producing at all.  Just had to be a sounding board for someone who seemed to know what they were doing".

His obituary in The Times picked out one of Ebdon’s best archive programmes was "an example of his more serious social comments" and was based on Budget speeches. "He listened to every budget speech between 1931 and 1968. Whether the Chancellor was Chamberlain, Cripps or Jenkins, in Ebdon’s view the speeches were meaningless, saying the same things in clichés. He cut and reassembled fragments from them which told you all you need to know about political speeches".

John stepped down from the archive programmes in 1986 though he continued writing and also working for the Planetarium for another 3 years. He suffered for many years from cancer of the spine and died in 2005.

I don't have an exact date for this recording but it's probably early 1986. Here John pokes some gentle fun at the medium itself and moves into Jonathan Hewat bloopers territory with some broadcasting slips of the tongue and corpsing.

With thanks to Angela Hind and Tessa Kulik

I loved listening to John Ebdon and used to fantasise about being the commentator at the Planeterium. Thanks so much for letting me hear his voice again.

I loved listening to John too. In the early 2000s I was the manager of a supermarket in Northwood, outer London, and recognised him from his voice. Over the following few years I got to know him and his wife as regular shoppers. Chatting to them both used to lift my spirits - I think it was mainly their humanity in an often uncaring world. I particularly enjoyed talking to John about cricket. One day we were having the car park resurfaced and work was underway while we continued to trade. I was trying to make sure the contractors were operating safely and allowing the customers to come and go reasonably freely when John emerged from the noise, smoke and the strong stench of tarmac. “It's awful, isn't it”, he said. “Yes, but we hope it'll be finished in a couple of days”, I replied. He was, of course, talking about the test match and I had to agree with him - a much greater cause for concern than a car park renovation.

Oh John Ebdon! The voice of so much of my Radio 4 listening. I have always borrowed his sign-off when public speaking. Delighted to find this site and to learn you are another Hull lad, Andy. I was born in East Hull and now live in Hulín in the Czech Republic. Not so very different!

Thanks for your efforts to keep a little bit of our past intact.