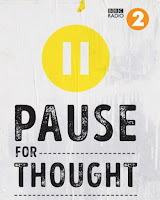 Radio 2 has been pausing for thought for half a century now. The two or three minutes of faith-led reflection is a surprisingly enduring programme element on an increasingly pop-orientated network, like some Reithian religious hangover. On a busy, frenetic breakfast show such an item can feel anachronistic and in danger of leading to a clunky gear change. But equally it can be seen as a welcome moment to take stock, consider others, to literally pause for thought.

Pause for Thought first aired at 8.55 am on Monday 6 April 1970 and replaced the weekday editions of Five to Ten. It was just one part of the religious output on BBC Radio 2 at the time that included two services on Sunday: People's Service (1945-80) just before Family Favourites and the long-running Sunday Half-Hour (1940-2013). Generally speech-based, Pause for Thought was initially not always led by a minister or religious representative. Depending on the theme for the week actors, writers and musicians made regular appearances. In the first few months we heard from Cliff Richard, Derek Nimmo, J.B. Priestley, Larry Adler and Joyce Grenfel. The programme proved to be very popular with an audience in excess of 1 million and an anthology of talks from the series published by the BBC - available for 25p from all good bookshops. 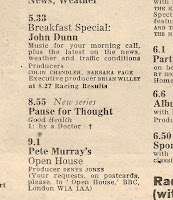 Schedule changes in October 1972 meant that Pause for Thought was no longer a stand-alone programme but part of the Early Show at 6.15 am and repeated during Terry Wogan's breakfast show at 8.45. By 1990 there were three daily editions with an extra slot in the wee small hours during what was then Night Ride. Whilst the talks had always been pre-recorded the overnight and early ones were now on tape but the breakfast show edition was live.

Though the times have varied over the intervening years the three weekday editions of Pause for Thought continue to this day, overnights in a pre-recorded version on OJ Borg's show and then two different editions live during Vanessa Feltz's and Zoe Ball's shows. No longer produced in-house by what is now the department of Religion and Ethics, its contracted out to TBI Media.

Over the years some of the contributors have become established radio names; I'm thinking of the likes for Rev Frank Topping, Rev. Roger Royle, Fr Brian D'Arcy and Rev. Ruth Scott. Here are a selection of recordings from the last 50 years:

This is an early example from August 1970 in which actor Peter Pacey reads from a selection of the recent translation of the Apocrypha.


From December 1984 a decidedly more light-hearted affair for Terry's final breakfast show (the first time around) from the BBC's Religious Affairs Correspondent Gerald Priestland who was a regular contributor with his Priestland's Postbag.

Although the Pause for Thought mainly used outside contributors BBC religious department staff also appeared including producers David Winter and John Newbury. A programme favourite for many years was Roger Royle who would consider listener's letters in what was titled Royle Mail. This edition dates from  February 1985.

By the 1990s the live editions had become more of a conversation between presenter and contributor to make the change of pace and topic less jarring and often adding an element of humour. From Wogan's return in January 1993 this is Rabbi Hugo Gryn.

Ruth Scott was a hugely popular contributor who sadly died last year. Here she is with Terry in April 2006.


Anglican Bishop Rob Gillion uses the fact that Wogan has just been voted the station's Ultimate Icon as the springboard for his talk in October 2007.

Bringing things up-to-date and marking the PFT's 50th anniversary last week is writer and comedian Paul Kerensa who kindly name-checked me in his opening remarks. Paul is speaking to Amol Rajan who was covering the breakfast show. 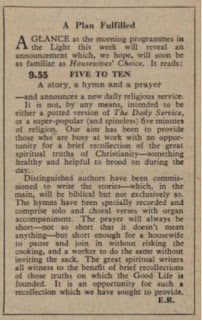 When Pause for Thought started in 1970 it was replacing the existing daily religious slot Five to Ten which, it won't surprise you to learn was on at 9.55 am. Originally billed as "a story, a hymn and a prayer" it started on the Light Programme in December 1950. The Radio Times explains that the aim "has been to provide those who are busy at work with an opportunity for a brief recollection of the great spiritual truths of Christianity - something healthy and helpful to brood on during the day". The stories were mainly but not exclusively biblical, the hymns recorded for solo and choral verses with organ accompaniment and a short prayer "short enough for a housewife to pause and join in without risking the cooking and a worker to do the same without inviting the sack." This example of Five to Ten dates from April 1958.

I can't leave the subject without also briefly mentioning Thought for the Day over on Radio 4. It too is fifty years old this month having replaced Ten to Eight sandwiched in-between the two editions of Today, which it turn replaced Lift Up Your Hearts (1939-65), or Lift Up Your Skirts according to one episode of I'm Sorry I'll Read That Again. Thought for the Day has had more of a controversial history than Pause for Thought, and I'll cover that in a future post.