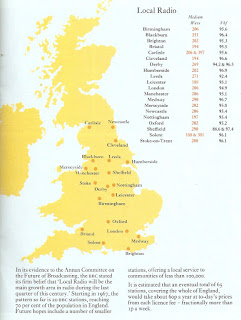 Over the last three and a half years I’ve been tracking the fiftieth anniversaries of the BBC local radio stations, in a series of nineteen posts from Leicester, Sheffield and Merseyside through to Newcastle, Lancashire and Humberside. I’ll be picking up the history again in November 2023 for the half century of BBC Radio Carlisle/Cumbria.

In the meantime here are two wonderful short publicity films that go behind the scenes at a number of stations a mere forty years ago. Both are titled Action Stations! – BBC Local Radio and were directed by Patricia Owtram for the BBC Local Radio Publicity Unit.

The first, with a running time of 20 minutes, dates from 1981 and is narrated by John Saunders. It’s full of images of newsrooms complete with typewriters, fax machines and Studer tape decks, remote studios, county shows, youth programming, snow days and local elections.

We see at work Radios Lincolnshire, Medway, Sheffield, Humberside (with coverage of the opening of the Humber Bridge this week in 1981), Nottingham, Carlisle (and their farming programme), Bristol (the O Level Show), Leicester, Leeds (with the Best Pub Pianist competition) and London (with the last ever GLC election).

The second shorter film dates from early 1980 though it includes footage from 1977 and 1978. Here the emphasis is more on community involvement and also the BBC Local Radio Parliamentary Unit.  We visit the short-lived Radio Taunton (a Bristol’s emergency news station), Medway, Leicester, Solent, Birmingham, Bristol and Sheffield. There are no credits for this film but the narrator sounds like Laure Mayer to me.

See how many familiar faces you can spot in Action Stations! BBC Local Radio.