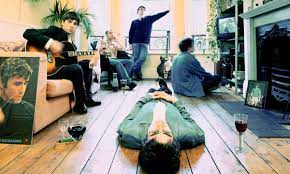 Cast your mind back a quarter of a century. Dominating the charts and the music press was Britpop, that catch-all for the resurgence in guitar-based pop from the like of Oasis, Blur, Pulp, Elastica, The Boo Radleys, Ash etc. But there was another musical movement sweeping the nation. Easy listening.

It’s hard to pin down how this all started, though this Radio 1 programme points the finger at the inclusion of Burt Bacharach on the cover of Definitely Maybe. It certainly sent all the record companies scurrying off to their archives and re-releasing   tracks they thought would never see the light of day again. Anything was fair game under the easy listening banner including tv theme tunes, library music, exotica, space age pop and the acts that your parents had enjoyed like Andy Williams and The Carpenters. Collections of CDs labelled as Sound Gallery, Cult Fiction, Loungecore, Cocktail Classics and Music to Watch Girls By filled the shelves at HMV. 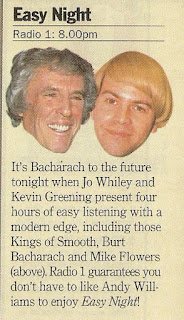 In May 1996 BBC Radio 1 devoted the whole of the Bank Holiday evening to the world of easy listening in Easy Night. Presenting were Kevin Greening and Jo Whiley. It’s only right that Kevin was there as he’d been instrumental in championing the easy revival on his weekend shows. On the cover of the CD single of Wonderwall by The Mike Flowers Pops there’s a sticker that reads “as first heard on the Kevin Greening show” and the sleeve thanks Will Saunders (Kevin’s then producer and in charge of Easy Night), Kevin and Chris Evans who played the record on his weekday breakfast show. Chris regularly dipped into the easy listening/library music archives using Alan Hawkshaw’s Girl in a Sports Car (known as Tina’s traffic news bed) and Sam Fonteyn’s theme from Please Sir!

In Easy Night we hear a mix of easy listening pop classics, new versions of old hits and a mix from The Karminsky Experience, the guys behind the In Flight Entertainment albums “mining a groove that seemed to be beamed in from another dimension.”

Kevin speaks to Burt Bacharach, whose PRS royalty cheques must have come flooding in as a result of this easy listening boom, and Tony Bennett, “God’s own crooner” in Kevin’s book. 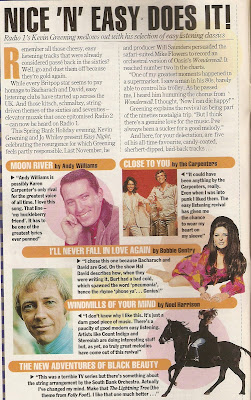 For no real apparent reason the programme is interspersed with Challenge Graham in which easy listening aficionado Graham Farrar is sent off round London to locate a fondue set, cocktail umbrellas and blue jeans belonging to Neil Diamond, a bit like one of those Apprentice shopping tasks. Graham Farrar is quite evidently Graham Norton in his pre-chat show days. Graham had first worked with producer Will Saunders on Radio 5’s Sunday Brunch and Radio 4’s Loose Ends.

Giving us the benefit of his wisdom is Professor Keith Haringey, Ronco Chair of Popular Musicology at De Montford University. No idea who the voice of the Professor is, and producer Will can’t recall either.

Choosing their favourite tracks in Celebrity Flashback are Paul Whitehouse who picks Dean Friedman’s Lucky Stars (“well slide over here”). Bjork’s unusual choice is the vocal dexterity of Yma Sumac with Tumpa. Ice T goes for Hey! Love by The Delfonics. Paul Hartnoll, one half of Orbital, selects Nancy Sinatra’s You Only Live Twice.

Count Indigo is in the studio with a unique rendition of Smells Like Teen Spirit. There’s Bacharach to the Future – The Definitive History of Easy Listening  which is far from definitive and a Top 10 of Easy Listening. That top 10 features (spoiler alert) Dana, Acker Bilk, Peggy Lee, Mantovani, Dusty Springfield, The Carpenters, Dionne Warwick, Morrissey and Andy Williams with their versions of Moon River, Petula Clark’s Downtown and taking the top spot Herb Alpert with This Guy’s in Love With You.

Providing all the links and announcements is the purring voice of Honor Blackman.

So once again wallow in the nostalgia of four hours of Easy Night. The recordings, in three parts, include news bulletins read by Jane Bolger and the start of Wendy Lloyd’s show at midnight. If records fade out that’s where I had to turn over the C90 tapes. Some records with a wide stereo spectrum appear to be missing part of one channel.

With thanks to Will Saunders.