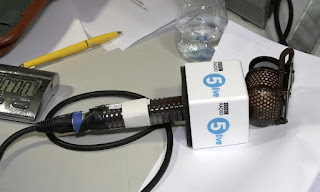 Last Saturday (6th of August) Mark Chapman introduced BBC Radio 5 live’s Sports Report with these words:  “We have full commentary of Everton against Chelsea at 5.30, so we have 25 minutes to get all of today’s results, and reports and reaction from as many players and managers as we can. We’ll round up the other sport that’s happened today away from the football. You can also find every single result on the BBC sport website from today as well as detailed coverage of your team”.

Here’s that edition of Sports Report.

And that was it. With no forewarning and no other announcement a 70 year tradition of having the classified football results read out by an announcer (or former announcer) had come to an end.  Whilst plenty of people realised what had happened there was no immediate social media storm and apparently no overnight complaints were made to the BBC. By Sunday a couple of sports journalists had picked up on the story and within a couple of days listeners, sports pundits and former sports presenters were all decrying  the decision of the BBC and likening it to “cultural vandalism” (Jim White in the Daily Telegraph).

Writing for The Times, Henry Winter concluded "By wanting to be in touch with a youth market that mainly doesn’t listen to sports radio, BBC executives have shown themselves out of touch with the millions who still wish to listen to the classified football results"

In a warm glow of nostalgia many people lamented the dropping of reading of the results and waxed lyrical about leaving the game with their dad, returning to the car and clicking on the radio just in time to hear Out of the Blue coming out of the speaker and James Alexander Gordon reading the results as only he could. Goodness knows how many people experience that today. By the time they’ve left the stadium they’re probably up-to-date on all the other scores in their team’s league and how their second team have done.

To be fair during Sports Report Chappers did give all the results, albeit at intervals during the programme and at a fair old pace. Forced to retrospectively justify the decision the BBC said that “with the addition of the 5.30pm live Premier League match to our coverage, Sports Report has been condensed into a shorter programme.” Whilst true, the Everton vs Chelsea coverage did kick-off at 5.30, there have been many previous instances where the programme was cut to 30 minutes, such as the 2009-10 season, but the results were still read by JAG (see schedule from 15 August 2009 above). I wouldn’t be surprised if they’d made the decision some time ago and that the evening fixtures provided the perfect excuse.

The BBC statement went on to say that “we will still offer a comprehensive goal service throughout the day on air and on the BBC Sport website as well as Final Score on BBC One. We would like to thank everyone who has read the classified football results on 5 Live over the years.” A statement that assumes that the audience possess smart phones or are otherwise hooked up to their IT, when a fair number will have neither, and then tells them that they can switch on the TV to get the full results. Surely 5 live should be servicing their listeners and not encouraging them to go elsewhere. 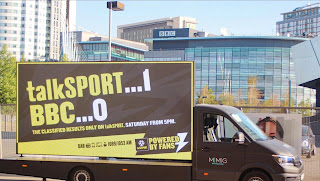 The BBC’s own goal gave the commercial radio sector the opportunity to remind listeners that they still provided a reading of the classified football results. talkSPORT said “hear them always with us”. Over at LBC News managing editor Tim John announced “we already broadcast the football scorecard, so will be making a change to our schedule to ensure that football fans have the option of listening live to the Classified Football Results at 17.05 every Saturday afternoon during the season."

Meanwhile on talkSPORT’s GameDay Live, rising to the occasion Adrian Durham prefaced the results like this: “We’re at the point where talkSPORT gives the football pyramid beyond the Premier League the respect that it deserves. Where the result of Manchester City is given the same time and prominence of Gloucester City. Where we honour the traditions of football that brought generations together in cars and kitchens across the country for decades and decades”. 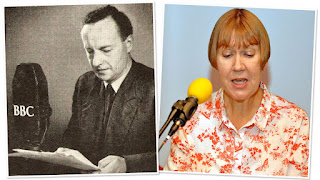 During the week many reports erroneously stated that only three people had read the results on BBC radio since the early 50s. Quite plainly this was nonsense but I’m guessing stems from the over-simplification of the history of Sports Report on Wikipedia which just lists John Webster, James Alexander Gordon and Charlotte Green. Though they were the main readers there were weeks were they weren’t available or on holiday and there was at least a two or three year gap between Webster’s retirement and JAG taking over.

Others who read the results in the 50s/60s include staff announcers Robin Boyle, John Hobday, John Wing, Colin Doran and Jimmy Kinsgbury. Jimmy became the chief announcer and took over when John Webster stepped down in late 1970. Other staff announcers reading the results in the 1970s included Simon Bates, David Bellan and Len Jackson. In about 1973 James Alexander Gordon became the main reader until 2013 but others did cover for him including Tim Gudgin and Paul Leighton. Charlotte Green took over in 2013 but when she was absent the results were read by others including Kevin Howells, Bob Ballard (he told me that he read it once “probably the most nervous I’ve ever been on the wireless”, Delyth Lloyd and Katherine Downes.

Special mention should also go to producer Audrey Adams who joined the BBC in 1983 and has looked after the Classified Footballs Result for decades.
Posted by Andy Walmsley at 15:00

Excellent post, Andy, especially your hat tip to my old BH sportsroom colleague Audrey. She's been the real unsung hero of the CFR's.

The football results were a geography lesson in disguise. Just listening to the places it made you start to wonder how far the teams had travelled for their 90 minutes of football.

Back in the day my own local team had their own coach from a local firm it was a very smart looking vehicle!

The oldest traditions are being wiped out by the fact we can access this information via a slab of glass and silicon!