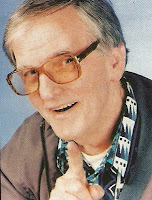 This Radio 1 show dates from a time when the station was also the home of some cutting edge comedy. Victor Lewis-Smith, Armando Iannucci, Julian Clary and Loose Talk featured in the schedules of the early 90s.

The Knowledge was a four-part spoof documentary narrated by Alan Freeman, this recording is of the one-off seasonal version, The Christmas Knowledge, broadcast on 30 December 1993.

What makes this such a hoot is not just the script but Fluff’s reading of it, a true tour de force. There’s also a bit of fun to be had against his Radio 1 colleagues including “beardy Scouser” John Peel.

The programme also features Tim Whitnall, Bernadine Corrigan, David Howarth, Peter Serafinowicz (man of voices including Darth Maul and Terry Wogan) and Julie Gibbs. Music is by Murray Gold (of Doctor Who fame) and the script written by Andy Riley (Bunny Suicides) and Kevin Cecil (who would both later write Hyperdrive and Robbie the Reindeer).  The Producer is Gareth Edwards.