I don’t know if you’ve been watching the BBC Four repeats of Top of the Pops this year. The repeats started with shows from 1976, the first year in which there is a more complete archive of programmes. I know if may not be the best year musically speaking. It certainly seemed to have more than its fair share of novelty acts and one-hit wonders. But it’s the year that I started to buy singles and when I really got into music and radio. So for me it’s a great year!

I don’t actually remember the first record I bought, but one of the first was the hit song of the summer, Don’t Go Breaking My Heart by Elton John and Kiki Dee. I still have the record, see the scan below. 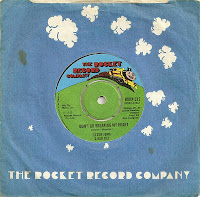 I started recording songs from the chart show with my little tape recorder, at that time presented by Tom Browne, back in 1975 but in the following year I was consistently listening to the charts and keeping the records that I liked. On 2 January 1977 I recorded the rundown of the best selling twenty singles of 1976. My recording has one link and the countdown missing but I’ve reinstated these from another source as well as adding Tom’s closing announcement. Preceding the show is a short trail that was heard during the week.

So let’s go back in time (frighteningly its 35 years ago) as Tom Browne goes on air at 6 p.m. As for Elton and Kiki, they made it to number two.

I was very much into following the singles charts at that time and for a while wrote out the weekly chart positions. I’ve long since thrown or lost those pieces of paper but I have found a handful of charts that I actually went to the trouble of typing up, here’s one from July 1976. Back in 1976 Tom Browne only played the Top 20 on Sunday but when the chart was announced on the Tuesday, at the time during Paul Burnett’s lunchtime show, you got the Top 30. 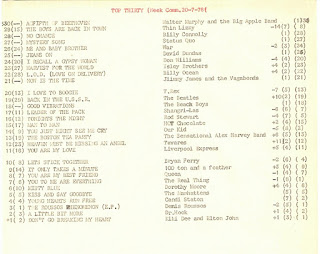